Two types of bears inhabit the park: the black bear and the grizzly bear. Both these bears are scavengers and omnivorous, eating both vegetation and meat. Plants though, especially berries and roots, form the mainstay of their diet. This is supplemented by carrion (meat killed by other animals or that died naturally) and whatever small animals they managed to kill. Although bears do not truly hibernate (their body temperature remains high), they do become dormant in winter, usually in snow-dens, where females often have 1-4 cubs before spring. 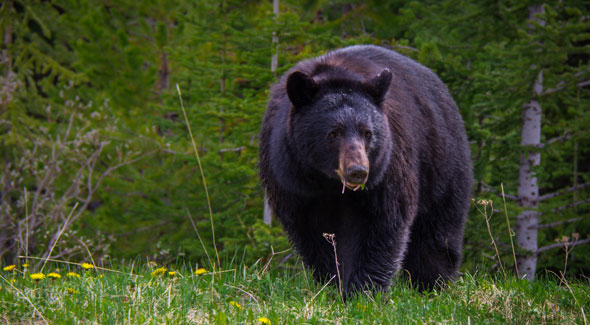 The black bear is commonly seen in forested areas, along roadsides and in campgrounds. It is smaller than the grizzly (weighing about 170 kg), lacks a hump on its shoulders, and has a straight, tan muzzle. Their colour varies from black to cinnamon while white patches on the chests are common. Short curved claws make them agile tree climbers. The black bear's diet is about 77 per cent vegetable, including grasses, roots, and berries (they are especially fond of dandelions and buffalo berries). Carrion and insects make up about 22 per cent of their diet and mammals a mere one per cent.

Black bears overlap their territories with other bears, often ranging up to 200 km2. Generally solitary except during breeding and sows with cubs, the black bears are more comfortable around humans than their cousin the grizzly and are therefore more commonly seen. Black bears are best viewed in the spring (April-June) and autumn (Sept-Oct) along roadsides and in berry patches, like the ones in Whistlers Campground.

Please be sure to store food and garbage in your vehicle while camping. Bears that become hooked on human food or garbage may have to be destroyed. For your own safety and the well-being of the bears, keep 100 meters or 10 bus lengths away from them at all times. 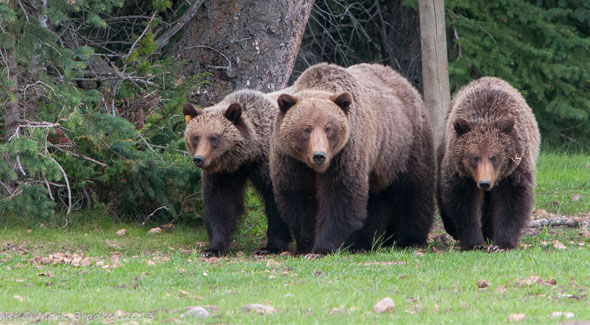 The grizzly bear, Jasper's monarch, is unmistakable because of the large muscular hump on its shoulders. The grizzly's face is concave in profile, its fur is long and thick and it can weigh up to 250 kg. The grizzly's colour varies but is usually light brown with some blond or white hairs giving it a grizzled or silver-tip effect. The claws are long and yellow or brown in colour. Averaging 15 centimetres in length, these claws are used for digging small mammals out of their dens or extracting roots. Generally an adult grizzly bear cannot climb trees, although a bear can use its massive strength to pull itself up using branches.

Plant material is basic to the grizzly's diet: grasses, horsetails, berries, and the roots of the glacier lily, spring beauty, and pea vine make up most of the bear's diet. In the fall grizzlies will eat up to 200,000 buffalo berries each day, trying to put on enough fat to make it through hibernation. Carrion from winter mortality (animals that have died over the winter) is an important food source in the spring. Big game such as elk and their young are occasionally hunted, but this often takes more energy than its worth.

Grizzlies show pronounced seasonal migration, spending summer in the alpine areas and descending to the valleys in spring and fall when food is scarce. Ranging up to 4000 km2, grizzly bears have large territories that often extend outside of the park. The grizzly bear is particularly sensitive to human influence and because of this is watched closely. Being the top of the food chain, the health of the entire ecosystem can be assessed through the health of the grizzly bear population. Jasper currently supports a viable population of between 100 - 120 individuals but the continued existence of the grizzly depends upon the preservation of large areas of undisturbed wilderness.

Hikers and mountain bikers should familiarize themselves with the Keep the wild in wildlife brochure before starting their trip and should always make noise while on the trail.