Unlike the antlers of the deer family, sheep and goats grow permanent horns. These horns grow a bit bigger every year and are used for the same purpose as antlers; establishing dominance over other males. Ridges and groves in horns are caused by seasonal fluctuations and allow scientists and park staff to estimate the age of an animal. 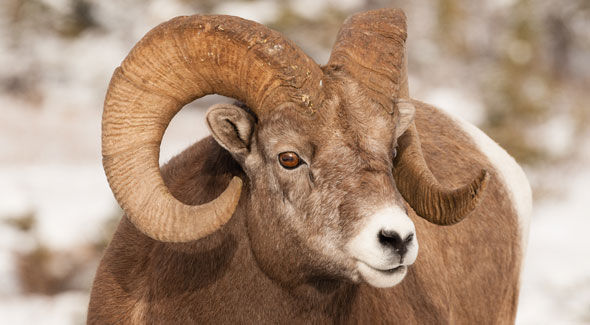 Bighorn sheep are fairly common in the park; their populations hover around 3000. Bighorns have a sandy coloured coat and a white rump. Rams have massive curved horns while the ewe's horns are short and spiky. Bighorns are primarily grazers and migrate seasonally between low grassy slopes and alpine meadows, always ensuring that the safety of a rocky ledge is nearby. Sheep form mixed herds of males and females in winter and segregated herds in summer. During the fall mating season, rams battle for dominance by crashing horns together until the weaker animal gives up. Bighorn sheep are frequently seen on Highway 16 east of Jasper and along the Icefields Parkway near Tangle Falls. 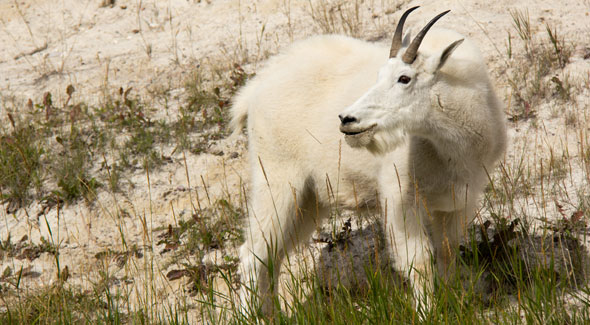 Mountain goats can be distinguished from bighorn sheep by their white coats, beards, and short black dagger-like horns that are carried by both sexes. Mountain goats are actually not goats, but belong to a family of mountain antelopes. Females or nannies and their kids often form groups during the summer, but males or "billies" are generally solitary. During the rut, fights between billies are rare, but when they do occur, they are vicious. Goats are generalists and live on a wide variety of vegetation, allowing them to survive year round at elevations above 2000 metres. Mountain goats have no seasonal migration, but often trek to salt licks in the valleys. They can often be seen at the Mount Kerkeslin "Goat Lick" viewpoint on the Icefields Parkway and Disaster Point on Highway 16 east.