Deer have antlers that grow, fall off and re-grow annually. In the spring, the males* grow antlers that develop encased in a soft, fury coating called velvet. In the fall, once the antlers have fully grown, the velvet is rubbed off and the males use their new antlers to prove dominance over other males for the females. Over winter, the antlers drop off, becoming a valuable source of minerals for small mammals.

* The only exception is caribou. Both the males and females grow antlers in this species. 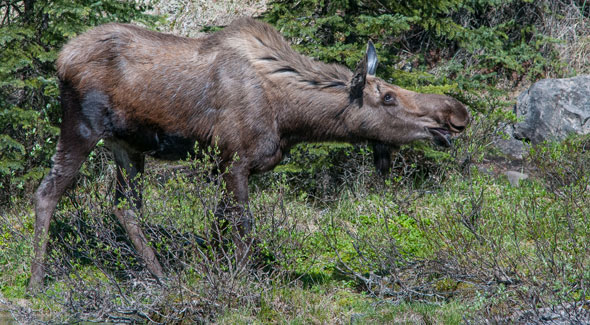 The moose is the largest member of the deer family. Easy to identify because of its long, gangly legs, palmed antlers, large, horse-like nose, and flap of skin hanging from the throat, called a dewlap. The moose is a solitary animal. Its preferred habitat in summer is along stream banks and lakeshores where aquatic plants add to its regular diet of leaves and twigs. The mating season is from mid-September to November, and males are particularly aggressive at this time. Calves (usually twins) are born in May and early June. There are about 150 moose in Jasper National Park. The Pocahontas wetlands, Yellowhead Pass, and Maligne Lake are some of the best viewing opportunities in the park. 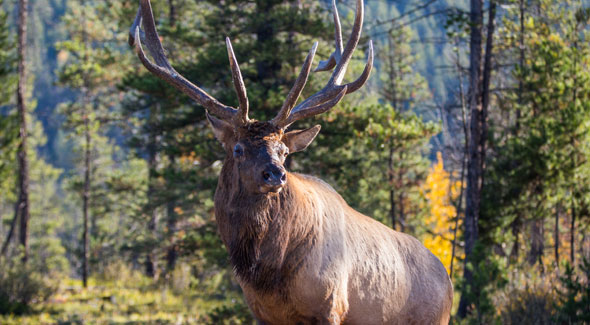 Elk are the park's most common seen ungulate. Tan-coloured animals with white rump patches, they can be seen throughout Jasper along the roadways and in the townsite. About 375 elk live in Jasper National Park, with large populations east of the park in the foothills. Most of Jasper's elk have been re-introduced after hunting nearly extirpated them from the park at the turn of the last century. Today an increasing population of elk, especially in the townsite, has led to their relocation to other parts of the park and province.

Elk can be a very dangerous animals. In the spring, mother elk protect their newborn calves fiercely; warding off any creature that comes between them and their young. In the fall during the autumn rut, the bull elk become extremely aggressive, using their large racks of antlers to display their dominance. Each year, a number of people are injured by park elk -- do not approach any elk closer than thirty meters, and watch closely for any aggressive signs displayed by the animal (raised ears, glaring looks, snorting, stamping feet). 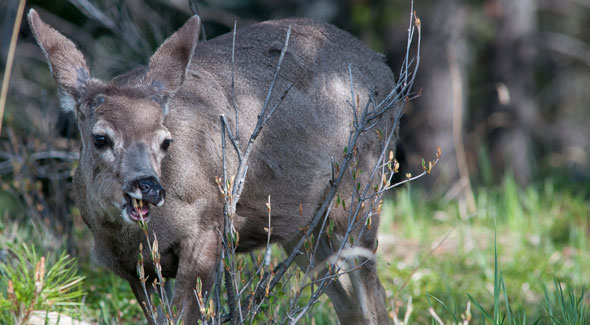 A mule deer's distinctive features include large ears and a black-tipped tail. Although mule deer are frequently seen along roads and in the townsite during the winter, their population levels remain fairly low. Standing only about a meter tall with antlers larger than a white-tale deer's, mule deer are most commonly found in small groups in drier open areas. Their summer diet includes shrubs and broad-leaved plants while their winter diet includes evergreen twigs, saplings, and shrubs foraged on open slopes and in aspen forests. 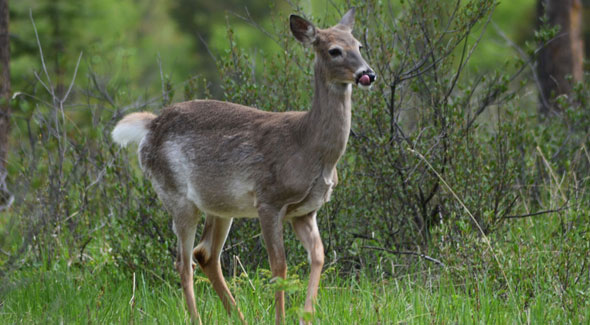 White-tailed deer are uncommon in the park, but can be seen in small numbers in the montane. Smaller than mule deer, white-tail deer can be easily identified by their reddish coats and long brown tails that, when held upright at any sign of alarm, show a white underside. Look for them at dawn and dusk along Snaring Road and the Henry House flats during the winter. 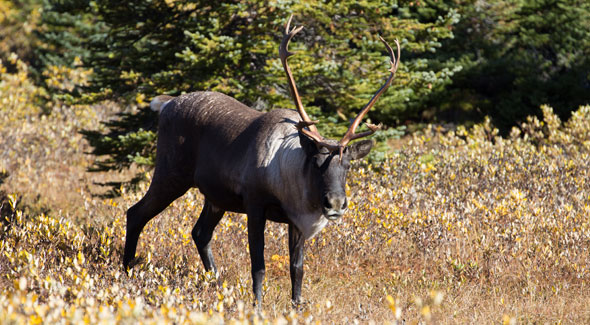 Caribou are comparable in size to elk, but are lighter in colour with large hooves. Unlike any other deer species, both the males and females carry antlers. Caribou generally form small herds and use their large hooves in the winter to "float" on top of the snow, helping them escape predators. Lichens are an important food source but grasses, broad-leaved plants and twigs are also included in their diet. Caribou are often sighted along the Icefields Parkway south of Sunwapta Falls and along the Maligne Road during winter. In the summer, finding caribou is very difficult as most herds retreat to high alpine meadows, far away from the many park visitors.

The small groups of caribou left in Jasper are probably the remnants of massive herds that roamed the area just after the last ice age. Now only around 145 are left in the Rockies, their numbers continuously declining since the 1950's due to logging of old growth forests, road kills, poaching and human encroachment. Roaming in and out of the park, the herds are susceptible to many kinds of conditions that have reduced the species population to threatened levels.