The red fox is the most widespread wild dog species on earth. They live everywhere from the frozen tundra of Canada and Asia, to the scorching deserts of Saudi Arabia! In addition to adapting to a wide variety of habitats, they show a remarkable ability to live in close proximity to people. They are slender and leggy, weighing about the same as a beagle or cocker spaniel (up to 30 pounds).

Red foxes are not always red - they come in a variety of colours, including black, silver and cross (which is a reddish-brown with a dark 'cross' across the back and shoulders).

Although their natural diet consists mainly of small rodents (in Jasper, ground squirrels and mice) they will eat almost anything, including berries and grasses. Unfortunately, red foxes will readily switch to human foods and will raid garbage and also beg food from campers. They will also prey on domestic cats. Foxes that have become conditioned to human food can become aggressive.

Please help Jasper National Park by always keeping your food and garbage away from all wildlife, including foxes. 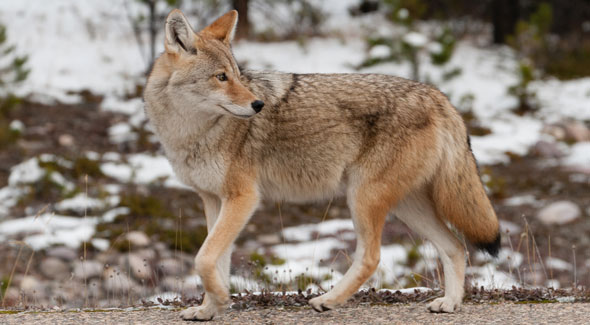 The coyote is a medium-sized grayish dog with a slender muzzle; large pointed ears, and a bushy tail. Coyotes are often seen patrolling the road right-of-ways in search of road kills and small rodents. Unlike a wolf, coyotes don't have a natural fear of human beings. They often patrol through the townsite, looking for garbage or stray cats. Coyotes that are being fed will often bite, sometimes seriously.

For your own safety and the health and well being of the animals, do not feed wildlife. 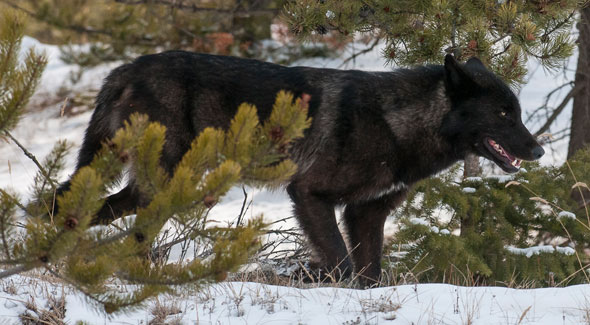 The wolf is similar in appearance to a large German shepherd, but is lankier with longer legs, larger feet, weighing up to 60 kg and standing a meter high at the shoulder. Its muzzle is larger and less pointed (less fox-like) than that of a coyote. Most wolves in Jasper National Park are dark in colour, although colours do range from whitish-gray to black. Wolves are difficult to view in Jasper as the species is generally wary of any human presence and have large ranges that can cover over 1000 square kilometers.

Wolves, despite their fierce reputation, very rarely attack people. They do hunt nearly everything else though, especially deer, wapiti, moose, sheep, beaver, hares and mice. Usually wolves hunt in packs ranging from 4-7 animals and were the target of extermination programs in national parks during the first half of the 20th century. These magnificent beasts however were never completely hunted out of Jasper and still roam throughout the park's forests like they did before human arrival.