The Fortress of Louisbourg is a fantastic archaeological site. In addition to a 60-acre fortified town (25% of which has been reconstructed), there are 18th century fishing properties, gun batteries, shipwrecks, lighthouses, battlefields and siege camps scattered over 22 square kilometres of land and sea.

These sites have rested quietly since the fortress was partly demolished and abandoned in the late 18th century. Yet time has softened their forms and nature has shrouded them in soil, seaweed and spruce.

Today all you can see are lumpy fields and knolls with interspersed rock piles, dense spruce forest and the ocean.

The history lies hidden beneath – and beautifully so. Just beneath the turf you can find the foundations of a community; the footprints of their homes and their work, meals, entertainment, death and battles.

These are the heritage resources of Louisbourg that Parks Canada works each day to better understand and protect for generations to come. 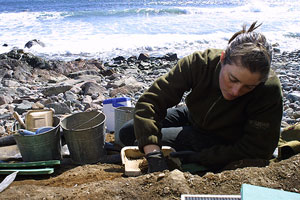 An archaeologist sifts through soil near the coastline.

The office, records and research collection are housed together in a climate-controlled facility at the site. A little over 3.5 million artifacts may be found in the open-drawer research collection in this building, while larger objects such as cut stone and timbers, cannonballs, and faunal material are located in dormant storage at various locations around the site.

The artifact collection is very large (over 5.5 million objects) but searchable via an extensive database. Over a million catalogued objects are fully documented in the database, along with all artifact inventories and thousands of photographs, drawings, field records, video clips, and reports.

Likewise, the Louisbourg archaeology GIS database holds detailed record of our survey data, along with geo-referenced historical plans, LiDAR imagery, high-resolution aerial photos, and other spatial data. The archaeology team works closely with Louisbourg historians and conservators, and a whole variety of expert researchers, students and enthusiastic volunteers to manage Louisbourg heritage. There's so much to discover and protect at this fascinating site!