The caribou don't realize they are crossing an international border. But all summer long, a large portion of the Porcupine Caribou Herd does just that: wanders back and forth between Yukon and Alaska. This migration starts in the spring, as they leave their wintering grounds and head up through Vuntut National Park and into Ivvavik National Park on the Yukon North Slope. 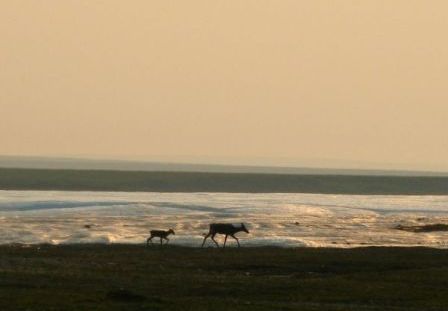 The pregnant cows make a beeline for the coastal plain. If the travelling is good, most of them will make it all the way over into the Arctic National Wildlife Refuge, in Alaska, before they calve. If it's a late spring and the snow is still deep, then more of them will calve on the Yukon portion of the calving ground, within Ivvavik National Park-or even before they reach the calving grounds. Eventually, most of the herd makes their way over to the Alaskan portion of the coastal plain where the forage is best. The flat, open expanse of the coastal plain also allows them to watch for predators, and the cool breezes off the Arctic Ocean provide some relief from the ever-present mosquitos.

As spring turns to summer, the mosquitos get worse and the caribou retreat from the coastal plain, sometimes in groups tens of thousands strong. Their search for windy ridges, snow patches and ice patches where they can avoid mosquitoes, takes many of them back across the border into the Yukon. 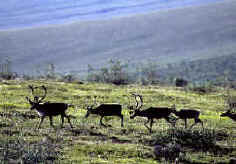 A small group of mature caribou

As the summer wears on, the flies start to come out. By August, most of the herd will have headed back into Alaska again to scatter in the high country in an effort to avoid the flies, which don't like the cold. As the weather cools and the bugs abate, the caribou begin drifting back across the border and into Vuntut National Park. As soon as the weather turns cold, they turn south and leave the park, heading down across Old Crow Flats towards their winter range, south of the Porcupine River.

In the Gwitchin village of Old Crow, located on the Porcupine River, everyone is getting excited. The caribou are coming, and the harvest is a busy time. People are out on the river patrolling: upstream, downstream; watching, waiting. Every year it's different: when the caribou show up, where they show up. Sometimes they move through quickly in large groups. Other times they arrive in small groups and hang around feeding. It all depends on where they calved, where they've wandered and what the weather does. Sometimes the elders know. But the caribou always do what they will. When they do arrive, word spreads quickly through the village and beyond. Gwitchin and Inuvialuit hunters from other communities will intercept the herd further south when it crosses the Dempster Highway. 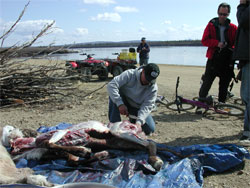 Skinning a caribou by the Porcupine River

For several weeks the village of Old Crow will be caught up in the harvest. Men will be busy hunting; women butchering, cutting and preparing the meat-making pemmican, drying it, smoking it, grinding it to store in the freezer-boiling bones and hooves, preparing hides for tanning. When it is over, nothing will have been wasted and no one will have been forgotten. The family of a young boy who has killed his first caribou will prepare a feast. The community will gather to honour the new hunter, and everyone will celebrate and be content that the caribou have provided for them once again, as they have always done.

The Porcupine Caribou Herd ranges across the northern Yukon, northeastern Alaska and the northwestern fringe of the Northwest Territories. For thousands of years, the herd has been a source of food, clothing, tools and shelter for the Gwitchin and Inuvialuit peoples who inhabit this region. The importance of the herd both as a subsistence resource and as a source of cultural identity continues today. 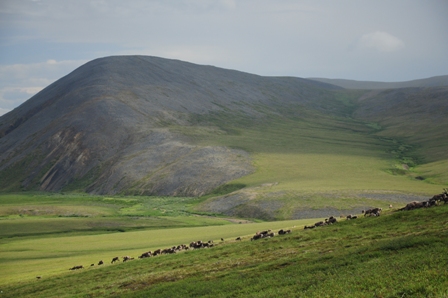 Two of Canada's national parks protect areas that are important to the continuing survival of the Porcupine Caribou Herd. Vuntut National Park, which protects a portion of the herd's spring and fall migration range, was established as part of the Vuntut Gwitchin First Nation Final Agreement. To the north, Ivvavik National Park protects the Canadian portion of the calving grounds and was established in conjunction with the Inuvialuit Final Agreement.

The Alaskan portion of the herd's range falls within the Arctic National Wildlife Refuge, including the main calving grounds, which lie on the coastal plain. Pressures to open the calving grounds for oil and gas development have made it the focus of an epic, and ongoing, conservation struggle.