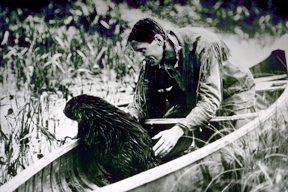 The noted naturalist Grey Owl lived in the park during the 1930's and worked for the Dominion Park Service. Through his writing, films and lecture tours he drew the world's attention to the need for conservation. His real name was Archibald Stansfeld Belaney and he was actually of English decent.

In 1888, Archibald Stansfeld Belaney (Grey Owl) was born in Hastings, England. As a boy, he fantasized of a different way of life, one far from his urban existence in England. In 1906, he immigrated to Canada. After working briefly in Toronto he moved. Grey Owl met and married an Ojibway girl named, Angele Egwuna, who introduced him to the Canadian wilderness and the Native way of life. Between 1907 and 1927, Grey Owl lived in Northern Ontario making his living as a trapper, guide and forest ranger.

In 1925, he met another woman, Gertrude Bernard. Anahareo, as Grey Owl soon began to call her, was a Mohawk woman from Mattawa, on the Ottawa River. Anahareo played a key role in changing the direction of Grey Owl's life. She encouraged him to stop trapping and with her support he turned his back on the lifestyle of 20 years. Needing another source of income, Grey Owl began to publish his writings.

The Dominion Parks Service became aware of Grey Owl through his articles that spoke passionately of wilderness protection. Grey Owl's writing reflected the philosophy of National Parks and he was hired as the first naturalist. In 1931, a cabin was built on a small lake in Riding Mountain National Park for Grey Owl, Anahareo, and their two beavers Rawhide and Jelly Roll. However, due to unsuitable water conditions, Grey Owl and his family were moved to Ajawaan Lake in Prince Albert National Park later that year.

Grey Owl wrote three bestselling books while he lived in Prince Albert National Park: Pilgrims of the Wild (1935), Sajo and the Beaver People (1935) and Empty Cabin (1936). These books, plus films produced about Grey Owl and his beavers, not only helped to promote his message of conservation but made him and his cabin, Beaver Lodge, famous. Hundreds of people visited Grey Owl during the summers. In 1935 and again in 1937, he went to England to promote his books and his ideas on conservation. However, the demanding pace of two or three lectures a day left Grey Owl physically and mentally drained. In spring of 1938, he returned to Beaver Lodge, a tired and weakened man. He died of pneumonia on April 13th, 1938.