Flora of a thousand faces 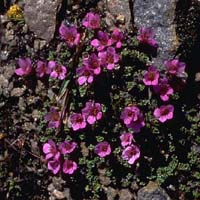 In addition, the specific climatic and maritime conditions of the region as well as the calcareous nature of the soil makes for a highly-specialized flora that can withstand the elements. Of the 450 species of vascular plants, 103 have been accorded the status of "plant of interest" and some of them are even rare.

Hikers may come into close contact with this distinctive environment by planning hiking itineraries along the trails provided on certain islands, or by using the accessible natural beaches on others. This way you can enjoy Nature's treasures without compromising their ecological integrity.

Between Earth and Sea 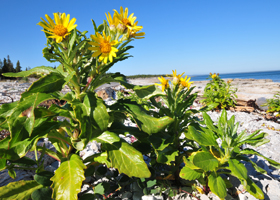 The seashore is omnipresent in the Mingan Islands. This "natural sidewalk", partially sandy, partially rocky, allows you to walk along the habitat called the " seashore ", the domain of plants which are saline-resistant and can tolerate dryness. The Oysterleaf ( Mertensia maritima ) with its luminous blue flowers, and the Seabeach groundsel ( Senecio pseudo-arnica ) whose flowers resemble small suns, manufacture secretions that protect their outer skins against dehydration from the salt and the rays of the sun. The Oysterleaf produces a powdery bloom that adheres to its leaves, while the Seabeach groundsel protects itself with a hairy down and wax.

The cliffs have their secrets too. The rock face may appear inaccessible, yet the saxifrages ( Saxifraga sp. ), whose name means "rock breakers", manage to survive there. Each little crack in the stone becomes an anchorage for the roots of these robust plants that grow there in startling splendour. With the month of June, the rockeries explode into colour: bursts of yellow, white and fuchsia, with the artist's palette spreading to its full range as the bluebells and the primroses blossom. However, in order to grow in the limestone, these plants have to adapt themselves to a highly alkaline soil. It is because they are calcium-tolerant that these species can grow in an environment that would be hostile to other plants.

If there is one habitat in the Mingan Islands that is truly extraordinary, it is by far the " barrens ". Swept by the winds, submissive to the elements, the barrens contain a natural wealth for those who know how to look. The region's plant life, climate and morphology together create a unique world which is part arctic tundra and part alpine summit - a environment characterized by low-lying vegetation and a harsh climate.

The barrens are also home to more than 30 varieties of vascular plants native to both arctic and alpine regions, including certain types of Lady's-slipper ( Cypridedium ) and the Calypso ( Calypso bulbosa ), both members of the orchid family. To these can be added the diverse forms and hues of a variety of other plants, including the Alpine Chickweed ( Cerastium alpinum ), Entire-leaved Mountain Avens ( Dryas integrifola ), Moss Campion ( Silene acaulis ) and Bird's-eye Primrose ( Primula laurentiana ). Different species of lichen and several types of shrub complete the floral tableau of the barrens.

The barrens cover some 10 percent of the Mingan Archipelago and are a favourite breeding ground for several species of nesting birds, including gulls, terns, and the Common Eider. The visitor to the archipelago can observe this ecosystem particularly on Petite île au Marteau, Île Nue de Mingan, Île Quarry and Île du Fantôme .

The beauty of this environment belies its tremendous fragility, which is such that the slightest human activity can have grave consequences. Staying on the park's trails is the best way to experience the barrens in close proximity while respecting the natural environment. 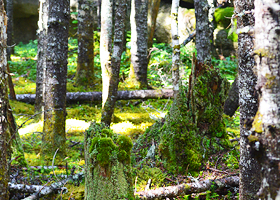 Of Moss and Shade

Covering nearly 60% of the park's total area, the boreal forest is by far the widest-ranging habitat of the archipelago. The woodlands of the Mingan Islands are made up of Balsam Fir ( Abies balsamea ), Black Spruce ( Picea mariana ) and White Spruce ( Picea glauca ). We also find a limited number of White Birch ( Betula papyrifera ) and alders ( Alnus sp. ) along the streams and around the ponds. Covered in feathery Schreber's Moss ( Pleurozium schreberi ), the forest floor plays host to the plant life most characteristic of Northern Quebec. Here grows an abundance of Bluebead Lilies ( Clintonia borealis ), Leafy White Orchids ( Platanthera dilatata ), One-flowered Pyrolas ( Moneses uniflora ) and Northern Star-flowers ( Trientalis borealis ). The hiking trails on Île Quarry provide easy access to the forest, which is otherwise too dense to be penetrated. Standing in solitary splendour near the island's interior is a cliff: an astonishing and grandiose witness to the emergence of the archipelago after the last ice age. 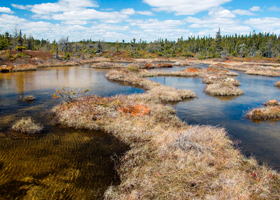 Feet in the Water

By now the reputation of the North Shore peat bogs is well-established. This fascinating and mysterious habitat is likewise found on the Mingan Islands, albeit with its own particularities.

The sphagnum forms an immense moving carpet, strewn with numerous small ponds. Calcium deposits, characteristic of the islands' peat bogs, form whitish masses in the water called "marl" which call to mind the calcareous nature of the soil.

The peat bogs of the Mingan Archipelago are veritable factories of organic matter, particularly the plants of the heath family. They contain impressive quantities of Vaccinium (Wild Blueberry and Cranberry), Andromeda (Bog Rosemary), Ledum (Labrador Tea), Rhododendron and Laurel, to name but a few. The harsh climate notwithstanding, these plants put out fine, delicate flowers, starting at the end of June.

In and around the marl ponds, Buckbeans ( Menyanthes trifoliata ), Pitcher Plants ( Sarracenia purpurea ) and other plants thrive in the fascinating milieu of the peat bog.

Ebb and Flow With the Tide 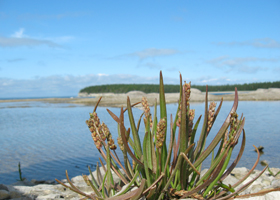 The presence of saltwater marshes on the North Shore of the Gulf is somewhat exceptional. Whereas the shoreline is usually made up of sand, gravel or rock, the salt marshes of the archipelago, with their alluvial particles, are noticeably different. The lack of any current and the limited amount of water that comes in at high tide allow these fine alluvial particles to deposit and form the muddy substratum typical of salt marshes. It is this organic floor in which the Salt-water Cord-grass ( Spartina alterniflora ), Chickenclaws ( Salicornia europaea ), Seaside Plantain ( Plantago maritima ) and other plants typical of this watery environment take root.

The salt marsh that attracts most interest is probably that of the Anse à Loups Marins located on Île Niapiskau . Two sandbanks close off the entry to the marsh at low tide, thus reducing water circulation.

It is in the fall that the salt marshes are at their most beautiful, becoming a virtual kaleidoscope of red, ochre and green under sudden gusts of wind. This visual splendour is enhanced by the migrating bird life that stops over in the springtime to feed on roots or small invertebrates. The miniature paradise of Île Niapiskau can be accessed by a hiking trail running alongside the marshes, providing an excellent observation point for an otherwise inaccessible universe.

Visitors From Other Times

The flora of the archipelago owes its reputation mainly to the work of Brothers Marie-Victorin and Rolland-Germain. These two botanists collected plants of the Mingan region during the 1920s, thus contributing to the classification of this flora which includes over 450 species of vascular plants, some of them rare and endemic to the Mingan Islands. "Our most spectacular discovery during our exploration of Anticosti-Minganie was most certainly that of the Mingan Thistle," said Brother Marie-Victorin. The work of the two men is found in the book Flore de l'Anticosti-Minganie .