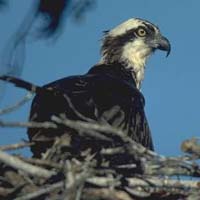 Strictly speaking, the park's territory consists only of the islands and not the sea. But how to dissociate the islands from the surrounding blue immensity? The sea and the land are two worlds intimately related.

Woodland animals live side by side with those whose habitat is the coast or the cold salty water of the Gulf of St. Lawrence.

In summer, all of this wildlife is there to welcome you!

Birds Between Land and Sea

The Atlantic Puffin . During their breeding season, some 35,000 seabird couples from 12 different species are harboured in the Mingan Archipelago National Park Reserve of Canada.

Among these birds, the Atlantic Puffin is clearly the one stealing the show. With its clown-like head and brightly coloured beak, it is one of the islands' most fascinating birds.

In French, the Atlantic Puffin is known as the Macareux moine because, out of the water, it keeps both feet together like a monk (moine) saying his prayers. Its brightly coloured beak gives it an exotic look and accounts for its nickname perroquet de mer (sea parrot). Others call it the calculot (calculator) because of the way it nods repeatedly, like a person counting.

The Gulf of St. Lawrence provides the necessary ecological and oceanographic conditions for the settlement of puffins. The sea currents make for a nutrient-rich aquatic environment, and the puffin prefers the smaller islands because there are less predators there. Puffins are found on three islands: two larger colonies are on Île de la Maison and Île à Calculot des Betchouanes, while a very small colony nests on Île aux Perroquets.

More... on the Atlantic Puffin

The Common Eider . This sea duck, known as Moyak by local people, is the most common species on the Mingan Archipelago.
The female has a very dull coat that allows her to escape the attention of predators while she is nesting. The male, on the other hand, has a brilliant plumage of white, black and yellow.

But Common Eiders are at their best when they come together in huge gatherings, floating on the water. They are then joined by other species of ducks such as the Scoters and the Oldsquaws.

In summer, the males leave for the open sea while the females and the ducklings form groups known as crèches . Young and female thrive on the abundant food carried in by the tide, and their presence along the edge of the islands enlivens the outings of countless visitors.

More... on the Common Eider

Seabirds are particularly vulnerable to disturbance during the nesting season. Disturbance can adversely affect their reproduction and the survival of young birds and adults. In order to encourage the successful reproduction of many species of seabird, certain sections of the islands are out of bounds during the summer. When hiking, your being attentive to where you go will help us protect these birds.

Do you feel you're being spied upon? Look out to sea and suddenly you will see the round head of a seal, watching you impishly from between the waves. People around here call them "sea wolves".

There are three types of seal living around the Mingan Archipelago: the Grey Seal, the Harbour Seal and the Harp Seal.

Seals are always curious about visitors to their habitats: you might just catch one looking back at you! And, if you listen carefully, you may even hear the cries of the sea wolves, guardians of the archipelago.

Whales on the Horizon

The waters of and beyond the archipelago are the hunting grounds of the cetaceans, always a fascinating sight. They are attracted by the huge shoals of plankton and fish that abound in the cold waters of the Gulf of St. Lawrence.

Around the islands and close to the shore, the most common species is the Minke Whale, which travels in groups of two to five animals. Then comes the Common Porpoise. Further offshore, other species may be seen, including the Blue Whale, the largest of all the mammals, the acrobatic Humpback Whale, an endangered species, and the Fin Whale, the "greyhound of the sea".

Each year, the islands of the Mingan Archipelago are invaded by winged wildlife. But over time, land animals have also succeeded in making the islands their home. The large number of habitats here has provided refuge to many different mammals.

These include the Beaver, the River Otter, the Muskrat, the Red Squirrel, the Snowshoe Hare, the Red and the Silver Fox, the Ermine, certain kinds of bat and a number of small rodents.

Occasionally, Black Bears and Moose can be found on certain islands near the coast.

Besides seabirds, there are a number of woodland birds on the Mingan Islands. Nearly 200 species of bird can be observed in the region. Some come here to breed or to feed, others to winter or to make a migratory stop-off. Certain species live here year-round. Birds found on the islands include warblers, buntings, some birds of prey and shorebirds (sandpipers, yellowlegs, etc.).