Putting yourself in the position of the black bear

To know how to react during an encounter with a black bear, you have to be able to put yourself in its position and learn the language of the black bear.

Even among themselves, black bears prefer flight to fight – and the same applies in the case of encounters with humans. A fight with another bear represents a risk of serious injury for the individual.


As a rule, the black bear is afraid of humans

In many cases, even before you catch sight of it, a black bear will have put some distance between you and itself. The black bear is inherently afraid of humans. Black bears consider humans, as a species, to be stronger than themselves – a fact that humans should learn to take advantage of.

The black bear must survive six months without eating

Hibernation is a key factor in the behaviour of the black bear, as it must store up enough energy in order to survive through the long winter months. 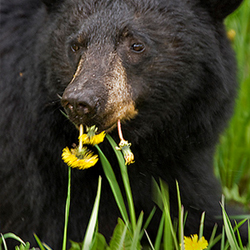 Black Bear eating Dandelion
Concerning a gestating female, she must also accumulate a sufficient quantity of energy during the summer and fall in order to be able not only to give birth to her cubs in the middle of winter but also to produce enough milk to feed them. Thus, the main concern of a black bear is to find food. Thanks to its excellent sense of smell and its intelligence, it is able to locate the berries and ants that it adores, tender shoots, animal carcasses, etc.

In order to stock energy without also expending too much of it, the bear seeks out easily accessible foods.

Hunting down a deer or a moose can be very energy-consuming. On the other hand, when given the opportunity, a bear may find it worthwhile to attack sick or newborn animals. They are easier to catch and the risks of fight-related injury are lower.

All in all, plants and berries remain the bear’s preferred food.

The black bear and human food

The black bear’s sense of smell sometimes leads it to food that humans have disposed of inappropriately or to odour sources that are not necessarily edible (e.g., a greasy barbecue).

Human food contains high concentrations of energy, and can thus be highly beneficial for a black bear seeking to build up its reserves. Not only is this energy source nutritious, the bear needn’t go to a lot of effort to gain access to it.

A bear that develops a taste for human food will also develop an association between humans and a source of easily accessible, high-energy food. In some situations, the bear eventually overcomes its fear of humans and seeks food sources that people inadvertently supply it with. At that point, the term “food-conditioned bear” is used.

That is when a black bear can become dangerous and will most likely end up having to be killed. Is the bear to be blamed for our negligence? It is our responsibility to dispose of our waste in a way that prevents any bear from gaining access to it. It’s a matter of safety for humans and a matter of survival for bears. 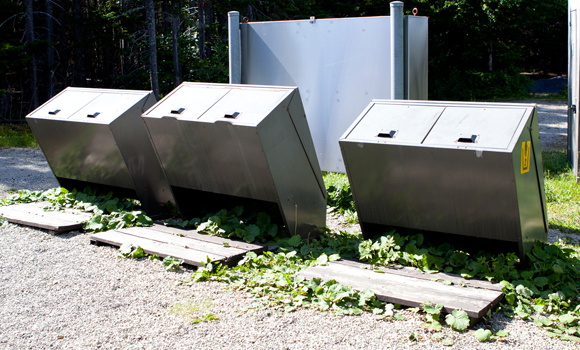