The Aboriginal peoples frequented the territory of Forillon long before the Europeans arrived.

The Aboriginal peoples came to Penouille on a seasonal basis, seeking their livelihood and fashioning stone tools at this location. Archaeologists believe they began to occupy the terrace dominating the Penouille salt marsh (located below the current Visitor Centre parking lot) about 4,000 years ago. On the Penouille peninsula itself there are traces of Aboriginal populations dating to approximately 2,600 years ago (Middle Woodland period).

Archaeological excavations conducted on Penouille have offered up an impressive quantity of flaking debris testifying to the presence of lithic workshops. Numerous tools and several traces of fire pits also provide evidence of craft-making and various domestic activities on this site. The great quantity of potsherds found on Penouille make it the Gaspé’s most important site for representing the Woodland period (associated with pottery).

The Aboriginal people also frequented Anse-au-Griffon Valley. This natural corridor was regularly used for portaging across the Forillon peninsula – i.e., from the Gulf of St. Lawrence to Gaspé Bay. Three of the four inventoried archaeological sites are perched upon natural platforms offering an unobstructed view out over the valley and vicinity.

On July 14, 1534, Jacques Cartier sailed along the shoreline of Forillon and cast anchor in Gaspé Bay ahead of an advancing storm. Two days later, strong winds prompted the French explorer to push on into the bay, toward the mouth of York River, across from Penouille peninsula. On July 24, he solemnly took possession of this land in the name of the King of France, erecting a cross on one of the points of Gaspé harbour. At which exact point this event occurred continues to be a total mystery!

Contrary to popular belief, Jacques Cartier was not the first European to have “discovered” the region. Beginning in the 15th century, European fishermen visited the Gaspé Peninsula, attracted by its natural harbours, fish-bearing waters and accommodating beaches . Basque, French, Portuguese and Spanish fleets sailed here to fish for cod. These fishermen were not settlers, however. They arrived in spring, fished all summer long and sailed back across the Atlantic in fall. Thus, for example, during the French Regime, the peak of Forillon’s population barely rose to more than 300.

That being said, archaeologists have found an abundance of traces bearing witness to the human occupation of Penouille under the French Regime, including Norman stoneware fragments dating from the 16th to the 18th centuries, fragments of French bricks and glass bottles, wrought iron nails, etc. When added to the vestiges of fishing shacks (e.g., remains of flooring, clay and straw infill of chimneys, etc .), all these artifacts testify to the presence of seasonal fishermen from Normandy.

During the British Conquest of New France (1758), troops led by General Wolfe destroyed the fishing stations on Forillon peninsula. From Penouille to Anse-aux-Sauvages, including Grande-Grave, soldiers set fire to houses, fishing boats and gear, and destroyed several thousand quintals of cod.

Following the war, British soldiers began settling in the Gaspé-Forillon region, aware of the economic opportunities offered by the peninsula as well as its strategic importance.

Thus, as early as 1764, Richard Ascah, a British army officer settled with his family at Penouille (which became “Peninsula” in English). Over time, the region welcomed in immigrants from England, Scotland, Ireland, New England and, above all, Jersey and Guernsey, the Channel Islands located between England and France, and attached politically to the United Kingdom.

From Jersey to Forillon

The British Conquest opened the door to merchants from the islands of Jersey and Guernsey who quickly became interested in the Gaspé’s fish-bearing waters. Of that number, Charles Robin, a Jerseyman, was the first to settle in Chaleur Bay, in 1767. Other Jerseymen soon followed, including the Janvrin brothers (Francis and Phillip), who, from 1798, controlled the fish trade all around Gaspé Bay and along the coast of Forillon peninsula, from Malbaie to Anse-au-Griffon.

In their ongoing quest for manpower, Jersey-based fishing companies hired a considerable number of fishermen, clerks, carpenters, seamen and other workers from Jersey and Guernsey. Many last names, such as Bourgaise, Fruing, Gavey, Janvrin, LeBoutillier, Lemesurier, Lescelleur, Luce, Pipon, Roberts and Simon bear witness to the important role played by Channel Island families in the settlement of Forillon. 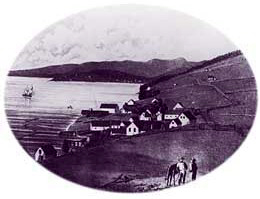 European fishermen frequented the site of Grande-Grave from as far back as the French Regime. They were drawn by the cod banks  close to shore as well as the haven represented by Gaspé Bay. They were also attracted Forillon peninsula’s coves and pebble beaches, which were ideal for fish-drying purposes (such beaches were called “graves” by French fishermen in North America, moreover).

In 1798, the Jersey-based company Janvrin set up for business at Grande-Grave and encouraged fishermen to settle there permanently. To ensure good return on their investment, fishing companies like Janvrin established several shoreline fishing stations and set up a system of credit for fishermen. As a result, fishing families settled in Forillon’s coves – and stayed.

Not long afterward, a second actor came on the scene at Grande-Grave. In 1845, William Hyman, a Russian Jew, set up a new fishing company modelled after those operated by the Jersey merchants.  A few years later, Janvrin was taken over by William Fruing. Together, Fruing’s and Hyman’s companies hired upwards of 50 fishermen, thus making Grande-Grave one of the leading fishing stations at the tip of the Gaspé Peninsula.

For this village, the second half of the 19th century represented its “golden age,” when more than 400 people inhabited Grande-Grave (which also encompassed the hamlets of Petit-Gaspé, Anse-Saint-Georges and Anse-aux-Sauvages – also known among English speakers as Little Gaspé, St. George’s Cove and Indian Cove, respectively ). The village was bustling with activity. Under the control of the two main companies, seasonal and year-round fishermen, fishermen farmers, clerks, tradesmen and their families set about catching and processing (i.e., salting and drying) cod for mass export to Italy, Spain and the Caribbean in what became known as the famous “Gaspé Cure.”

Historic buildings in the Grande-Grave area

Visit our exhibits and travel back in time in the company of our enthusiastic guide-interpreters! Grande-Grave’s authentic houses and buildings are the last standing reminders of a fishing village once common along the Gaspé coastline.

Living from the land and the forest - L'Anse-au-Griffon Valley

The Gaspé Peninsula was for many years “cod’s country.” Given the power of these merchants, the Catholic Church exhorted local people to vary their means of subsistence, particularly by farming the land. However, Forillon’s largely hilly geography made it ill-suited for large-scale farming, with the exception of the Anse-au-Griffon valley.

In 1851, the valley was surveyed and made open to settlement. In 1856, the Jersey-born businessman John Le Boutillier, who had settled at the mouth of Anse-au-Griffon River, had a carriageable road put in along the former portage route. By the year following, the valley had become home to 14 houses. In 1900, 37 families lived in this area, earning the better part of their income from growing grain and vegetables and raising cattle for milk and meat.

Aside from their farmlands, these families often owned a woodlot whose resources could be turned to good account. In a very short time, valley sawmills were operating full time, producing boards and planking for residential construction and shipbuilding, cedar shingles, staves for the large casks used to ship dry cod, timbers for the building and repair of wharves and bridges, and so on. In addition to these small local businesses, export companies located at the mouth of the river, such as Calhoun Lumber Co. of New Brunswick, purchased their wood from area farmers. For the people inhabiting Anse-au-Griffon valley, fishing was a sideline – in total contrast with the people living at Grande-Grave.

Perched atop a 95-metre-high cliff, the Cape Gaspé lighthouse has guided navigators for more than 140 years. The first light on Cape Gaspé, built in 1873, was typical of the structures  built along the St. Lawrence during the 19th century; it consisted in a square wooden building rising 30 feet high and was attached to the lightkeeper’s dwelling. Following a fire in 1892, it was replaced by a second lighthouse, which closely resembled the first.

From its position at the top of a cliff, the Cape Gaspé light was perfectly visible to vessels sailing either in the bay or in the Gulf. However, because the building was constantly exposed to strong winds and harsh weather, it tended to deteriorate quickly. Indeed, in 1946, the tower of the second light collapsed. Thus, in 1950, a third lighthouse was built – this time in concrete. This is the lighthouse that today’s visitors can admire.

Location: 4 kilometres by foot  from Anse-aux-Amérindiens
The Cape Gaspé lighthouse site can be reached by foot or bicycle via the Les Graves trail.

Fort Peninsula is the only World War II shore battery that has been completely preserved and that is open to the public in Quebec. This deeply moving site is also the main vestige of the Gaspé naval base, one of Canada’s primary military stations during the Second World War.
From 1942 to 1944, German “U-boote” (submarines) entered the St. Lawrence Gulf and River. There they sank 23 Allied ships during what has become known as the Battle of the St. Lawrence. The war, which until then had been a somewhat remote concern, suddenly became an immediate, threatening and palpable reality for people in the Gaspé.

In response to this danger, Canadian Navy strategists chose to site a naval base at Gaspé Bay. This sprawling natural port is considered as one of North America’s finest havens. In particular, Gaspé Bay’s deep waters were easy to defend, being sheltered by the surrounding coastal relief and the sand spits of Penouille and Sandy Beach. Furthermore, the bay was strategically well positioned, enabling the navy to defend both the St. Lawrence Gulf and River.

Inaugurated on May 1, 1942, the Gaspé naval base would play a dual role, protecting Gaspé Bay (seen as offering haven to a portion of the Allied fleet in the event of an invasion of Great Britain by Nazi Germany) and helping to protect Allied commercial and military  vessels sailing in the St. Lawrence.

This military complex, christened “HMCS Fort Ramsay,” consisted of the naval base proper, three coastal batteries (Fort Prével, Fort Haldimand and Fort Peninsula), a huge anti-submarine net, which closed off Gaspé Bay to any would-be incursions by German submarines, and a fleet of 19 warships.

Location: Fort Peninsula, on Route 132, near Penouille
Be sure to visit the underground fortifications!
The site also features a picnic area and toilet to enhance your visit.