As of June 1, Forillon National Park began a gradual reopening of some outdoor areas, facilities and services. Please check our website regularly for the current status of this location and others. 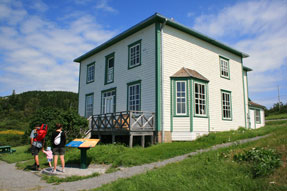 Step into this century-old home, where the exhibit entitled “Gaspesians from Land’s End” will help you discover the life of the people who once inhabited Forillon peninsula. In this part of the world, a fascinating mosaic of cultures, faiths and traditions emerged from the daily contact occurring between an array of closely knit communities having some colourful lingos: Channel Islanders (Jerseymen and Guernseymen), French Canadians, Italians, Jews, English, Irish and Scots.

This exhibit will also provide you with insights into the episode of the expropriation of property owned by Forillon families in order to create the park.

Take time out to visit the home of the Blanchette family, the barn, fish shed, woodshed and various structures used by the family to dry cod. Costumed interpreters are on hand to answer your questions and provide you with additional background. To round off your visit, be sure to take a few minutes to view the video entitled “We Always Looked to the Sea,” which is screened in the barn.

Many families at Grande-Grave who fished for a living also did a little mountainside farming on the side. A veritable emblem of Forillon, the Blanchette house bears witness to the fisherman-farmers’ traditional way of life in the early 20th century.

Treasures abound inside this historic general store, which occupies the ground floor of the original home built by William Hyman in 1864.

When you step into the store’s  warm atmosphere of yesteryear, you’ll discover the typical operations of the “company stores” operated by the major fish merchants and their huge inventory, including: canned products, patent medicines, china dinner services, farming equipment, fishing tackle, clothing, etc. The video entitled “Time and Tide Remembered” is presented in the screening room adjoining the store.

Upstairs, be sure to visit the exhibit Living with the Seasons, which explores the way Forillon families secured their livelihood, in harmony with nature and the seasons. Finally, an exhibit in the Hyman warehouse provides a window onto the flourishing international cod trade in the early 20th century. 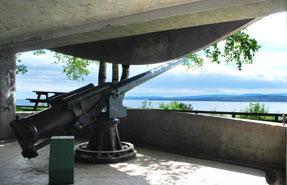 Discover a little-known episode of World War II. Fort Peninsula is the only World War II shore battery that has been completely preserved and that is open to the public in Quebec.

Location: Fort Peninsula, on Route 132 near Penouille
The site also features a picnic area and toilet to enhance your visit. 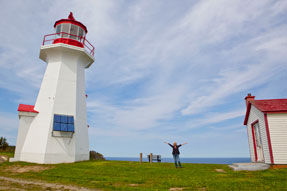 A genuine sentry of the sea, the Cape Gaspé lighthouse rises proudly atop Forillon peninsula, standing watch over the boundary between the Gulf of St. Lawrence and Gaspé Bay. When you reconnoitre this tip of the Gaspé and breathe in the sea air, you’ll really know what it means to be at land’s end!

Location: 4 kilometers by foot from Anse-aux-Amérindiens
The Cape Gaspé lighthouse site can be reached by foot or bicycle via the Les Graves trail.