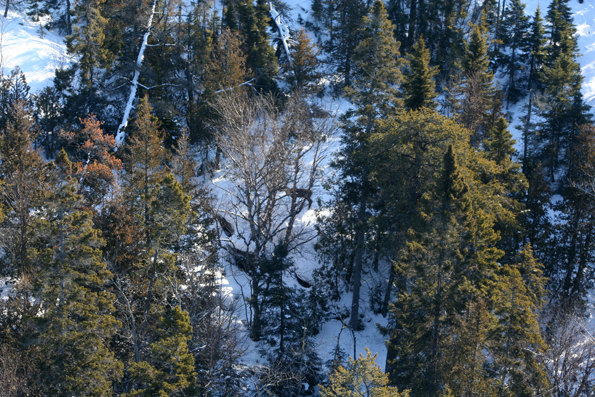 Aerial photograph of a caribou taken during the 2009 survey—can you spot it? © Parks Canada

But caribou can be hard to spot! Sometimes called the ‘grey ghosts’ of the boreal forest, caribou blend into their forest surroundings and are difficult to see. To increase our chances of finding caribou, we fly aerial surveys in winter, when the animals leave tracks in the snow that are easier to spot on sunny days. The aerial survey will use two different aircrafts: a small airplane, to cover large areas quickly and search for caribou tracks, and a helicopter to follow-up on track sightings, find animals and collect scat for DNA analysis.

Our aerial survey is part of a larger project led by the Ontario Ministry of Natural Resources and Forestry to survey Woodland Caribou (Rangifer tarandus caribou) along the north shore of Lake Superior. Woodland caribou were assessed by the Committee on the Status of Endangered Wildlife in Canada (COSEWIC) as threatened in 2002 and are protected under the Species at Risk Act. To thrive, these animals require large areas of undisturbed, mature coniferous forest; the very type of forest protected in Pukaskwa. The coastline and coastal islands of the park are considered habitat critical to the recovery of woodland caribou along the north shore of Lake Superior. Survey efforts will be focussed on this critical habitat, both within and outside Pukaskwa National Park’s borders.

Since 1972, aerial surveys have been conducted regularly to monitor caribou in Pukaskwa National Park. The number of caribou counted during the surveys is always small; with a maximum of 38 seen in the park during a survey in 1979. The latest survey, completed in 2009, resulted in an estimate of only four caribou, contributing to concerns that caribou might be disappearing from Pukaskwa National Park. The 2016 survey will contribute to our long-term data and help us understand how many caribou are now in the park and along the north shore of Lake Superior. 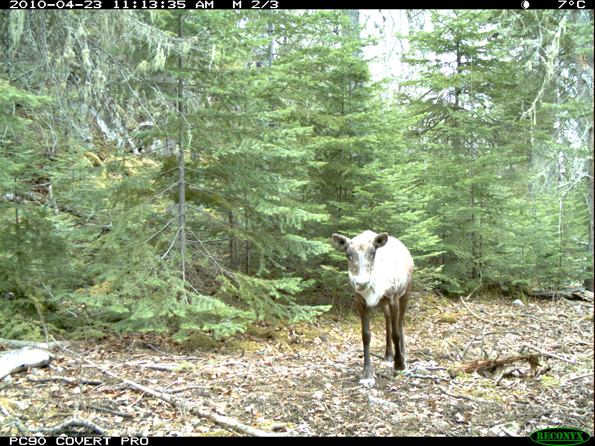 In addition to aerial surveys, we also use motion-activated cameras and scat samples to monitor caribou in Pukaskwa National Park. By collecting scat, individual caribou can be identified based on their DNA. These sources of information all contribute to our understanding of how caribou are doing in the park. Keep an eye on Pukaskwa’s Facebook page for results from this year’s survey!