A park for all seasons 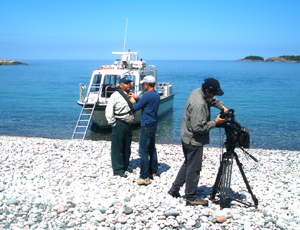 Pukaskwa National Park protects 1878 square kilometres of an ecosystem featuring boreal forest and Lake Superior shoreline. Yet, the entire park has only two kilometres of road inside its boundaries. So, the producer and videographer from OASIS HD endured boat and helicopter rides (we don’t think they minded these hardships) and spent several nights in remote locations during their intensive week of filming last June.

It was worth it though! The finished episode provides viewers with a behind-the-scenes look at the monitoring and research done by Parks Canada to help ensure the protection and presentation of Pukaskwa’s priceless natural and cultural treasures. 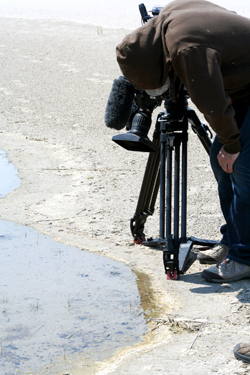 Getting some close ups
© Parks Canada / Martha Allen
On November 13, 2011 at 4p.m., everyone is invited to attend a screening of Pukaskwa and Tuktuk Nogait, two never-before-seen episodes of A Park For All Seasons. In honour of Parks Canada’s centennial, OASIS HD is presenting a special theatrical event in full high definition at 45 theatres across Canada. The screening will be followed by a live Question and Answer session, hosted by Sarah Harmer, during which audiences from coast to coast can send their questions to a panel of Parks Canada experts via Twitter.