Access is by boat only. Privately owned water taxis operate out of Honey Harbour. Canoeing and kayaking are recommended for experienced paddlers only since there is high boat traffic during the summer months. There are no bridges, buses, or ferries and it is a five kilometre swim from the mainland!

2. Why is all the dead wood left in the forest to rot?

When trees or branches die, they provide food for insects, fungi and bacteria which, in turn, release nutrients stored in trees back to the soil. Young trees use this fresh supply of nutrients to grow. The death of a tree means life to many animals. It could be dinner, a home, or just a place to rest.

3. How can we prevent raccoon invasions?

The best way is to keep all food away from these nimble fingered, masked bandits. Double wrap and store food in a locked container or have the container suspended between two trees. Never keep food in your tent. Feeding of wildlife is prohibited.

4. How do you tell the difference between a eastern massasauga rattlesnake and an eastern fox snake?

The rattlesnake is best identified by its triangular-shaped head and the obvious rattle. It is heavy bodied and usually small. It is generally sand to light brown in colour, highlighted by a regular brown bowtie pattern along the length of its back. The fox snake is a long muscular snake with a light copper colour head and a tapered tail. It has a yellowish tinge body, highlighted by black irregular blotches.

5. Why is the eastern massasauga rattlesnake protected?

This reptile is a valuable component to the diversity and health of our natural ecosystem. Georgian Bay is one of the last remaining natural habitats in the world for this species. It is protected by law in Ontario and National Parks. There is a fine of $150, 000 or six months in jail or both for killing, capturing or harming the Eastern Massasauga Rattlesnake, under the National Parks Act. 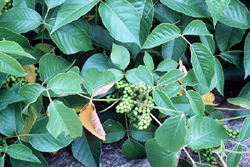 6. How can I easily identify poison ivy?

This plant is usually found along roadsides or trails. Each leaf has three pointed leaflets. The edges of the leaflets are smooth or slightly toothed. Leaf colour is reddish in spring, dull satin green in summer, and various shades of yellow, orange, red or bronze in autumn.

Pets harass the wildlife. Dogs can run deer to exhaustion and death especially in the spring when the deer are weak from lack of food. Dogs and cats have been known to molest and injure chipmunks and birds. A leash may also protect your dog from rattlesnake bites, porcupine quills, and poison ivy (which may be transmitted to anyone petting it.)

8. When was GBINP formed and was it ever called Beausoleil Island National Park?

9. Why is hunting not allowed?

Hunting is not allowed because one of the main purposes of National Parks is to provide protection for plants and animals.