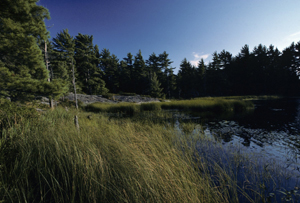 Swamps, bogs and marshes are three distinctly different kinds of wetlands which occur in the Thirty Thousand Island area. Basically, the differences are as follows:

Marshes usually form along protected shorelines or in shallow lakes or ponds. Plant and animal life is extremely abundant, with cattails being the dominant form of vegetation.

Bogs form in relatively steep-sided, deep pools which have little or poor drainage. They are associated with the north, but may exist in more southern areas such as Georgian Bay, where glaciers have gouged out basins. In their initial stages, they are relatively devoid of life except for a few specialized species of plants such as sphagnum moss which can live in acidic and oxygen poor conditions.

A swamp is essentially a wet forest. In our area the trees found in a swamp include black ash, willow, dogwood, yellow birch,. As a swamp ages, there is a build-up of soil which eventually results in drier conditions and new tree species associated with these new conditions. Marshes, bogs and swamps all undergo this process of succession, but in each case the climax community of plants and animals is different.

Because of poor drainage, many pockets on the islands contain stands of swampy or wet forest vegetation. Here, water-tolerant trees such as white cedar, yellow birch, black ash and willow grow. Great patches of horsetails and ferns thrive in the moist environment, giving these areas a jungle-like atmosphere. Rotting logs are fertile beds for carpets of mosses and for young seedlings. An example of this type of habitat is the cedar grove on southern Beausoleil Island. Water seeping down from the central hill of the island is trapped in a series of beach ridges which were left as glacial Lake Algonquin receded long ago. Once a young swamp, today it has reached old age and is somewhere between being a swamp and a wetter-than-usual coniferous forest.

Many swamps also contain small bog-like ponds. Clumps of marsh vegetation flourish here and there where water is more plentiful, reminding us that many swamps start as marshes. Probably the most noticeable form of life is the mosquito, especially in June when these swampy areas still contain large amounts of water. Grey tree frogs, wood frogs, salamanders and wood ducks do well here.

The marshes of Georgian Bay are of an ephemeral nature. The water levels of the Bay seem to follow a ten-year cycle which includes both high and low water levels. The marshes develop along the eastern sides of islands and in the low water phase, remnants of them can be found even in times of high water such as at present.

Cattails, sedges and giant reed grass (at 2-3 M tall, it is one of the tallest grasses native to Canada), provide cover for nesting birds such as the American bittern or Virginia rail. The bittern's striped chest and habit of remaining motionless when it senses danger make it remarkably well-adapted to this environment.

Red-winged blackbirds, noisily guard their nesting territories. Like the "side-entrance" nests of the long-billed marsh wrens, their nests are woven into the cattail stems.

Under the surface, in the oozing mud, mudpuppies wave their gills constantly in order to get oxygen from the water. They feed on insects and snails and crayfish which are found there in great abundance. Musk turtles (also called stinkpots because of their odour), Midland painted turtles, snapping turtles, bullfrogs, green frogs and water snakes are among the other herpetiles (reptiles and amphibians) which are found there.

Fish which live here are those which can tolerate tepid, shallow and often muddy waters: pumpkinseed, bluegill, yellow perch and carp. Another inhabitant is the muskrat which survives the winter by pulling up and eating the roots of water plants such as cattail, arrowhead, water lilies and wild calla or water arum.

Other plants associated with marshes include water smartweed (a favourite of wild ducks) and pickerelweed which is named for the type of fish which often find protection among its underwater stems and leaves.

It is interesting to note that while the marshes of the prairies form chiefly in sloughs and ponds, those of the Great Lakes are mainly found along the shorelines of these large lakes.

Small bogs are very typical of the Georgian Bay region and are sprinkled throughout the area. Many were formed in depressions and hollows left by the glaciers. Others have been formed more recently by beaver dams.

These ponds are often deep and stagnant because of blocked drainage. Because of the high acidity of the water, they are inhabited by a unique community of plants and animals. A young bog is relatively barren and only certain plants can survive its harsh conditions. In addition, the acidic nature of the water and the relative lack of dissolved oxygen results in a very slow rate of decay. Thus recycling of nutrients is at a minimum and the dead matter builds up instead of quickly decaying. We sometimes use this material on our lawns under the name peat moss.

Sphagnum moss is a key life form of a bog. It grows around the edges and sometimes forms mats which float out over the water. In older bogs, the mat may completely choke the pond. The mats provide a base for rose pogonia and calopogon or grass pink, two orchids whose blooms brighten up the bogs in June. Leatherleaf, Labrador tea, sweet gale and wild cranberry, plants with very thick, leathery leaves also grow on this floating "mattress." Although it may seem strange to say, water is hard to come by in a bog if you are a plant. That is why thick-leaved plants such as leatherleaf grow here. This type of adaptation is also used by plants of hot, dry habitats.

As a bog, the variety of both plant and animal life increases. Pond edges become covered with luxuriant growths of sedges and other wetland vegetation. As these plants decay, the water is further deprived of oxygen, making it unsuitable for fish.

A common sight is painted turtles lined up like "bumps on a log." At times, great snapping turtles lie on the floating sphagnum mats absorbing the sun. More secretive turtles such as the high-shelled Blandings turtle or the spotted turtle push through the floating duckweed or remain hidden in small secluded grassy ponds. Both of these turtles are endangered species and are seldom seen.

Also endangered, the timid eastern massasauga rattlesnake would likely be close to a pond or sunning on a beaver dam where its favourite meals, frogs and other small amphibians and mammals are abundant.

Leopard frogs and green frogs use their camouflage for protection against prowling water snakes. Early in the spring, during breeding season, spring peepers "peep" and bullfrogs groan like fog horns. Red spotted newts lay their eggs in the shallows.
Aquatic insects such as water scorpions and giant water bugs, as well as their prey dragonfly and stonefly nymphs, caddis fly larvae and diving beetles are very numerous. Caddis fly larvae are unusual because they construct "houses" or cases of tiny pebbles or bits of vegetation for protection.

The shores of these bogs are visited regularly by deer, muskrat, raccoon and mink which leave their tell-tale tracks in the soft mud. Of course, each pond often has a lodge with a resident pair of beaver. Because they are nocturnal animals, you may not see them at work, but their signs are the unmistakable felled trees and dams. In early winter, you may see the snow slides of the river otter.

Diving terns and great blue herons stocking over the sphagnum mat may sometime be seen. A great variety of ducks, and loons nest on the shores or find shelter here during migrations. The edges of the ponds are often lined with the stark skeletons of trees which died when the beaver raised the level of the pond. These trees provide nesting sites for tree swallows and eastern kingbirds and lend an eerie atmosphere to these bogs and ponds.