Lying on the edge of the Canadian Shield, the Park islands are home to both northern and southern species of plants and animals. This "edge effect" is evident in the Park landscape. The barren, glacier-scraped rock and windswept pines that fired the imagination of the Group of Seven artists dominate the northern islands and northern Beausoleil Island. Southern Beausoleil, with its thicker soils and rich hardwood forests is very different. 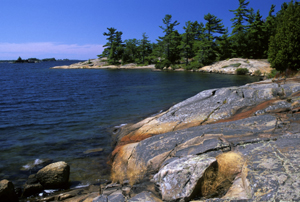 The islands of Georgian Bay are renowned for the variety of reptiles and amphibians they support. The park has designated four of these, including the eastern massasauga rattlesnake, as priority species requiring special protection. Beausoleil Island is one of the last refuges for the seldom seen eastern massasauga; the only snake in Ontario whose venom is poisonous and potentially dangerous. If you should spot one, do not handle or provoke the snake, and please contact Park staff. In spring, a variety of birds sweep into Georgian Bay Islands National Park in a burst of noise and colour. Pockets of pink, yellow, and purple wildflowers decorate the Park in summer, yielding centre stage to the hardwood forest, which flames with brilliant reds and yellows in autumn. In the winter, cross-country skiers look for animal tracks on icy, snow-covered Beausoleil Island.

The park at its peak: summer is a time of stunning contrasts at Georgian Bay Islands, when the sun brings out the richest colours of the landscape. On sunny days, the Bay's cobalt waters form a striking counterpart to the light blue of the sky, the pinkish rocks of the Canadian Shield, and the dark green of the park's famous windswept pines. The Cambrian Trail, in the north part of Beausoleil Island, offers especially striking views of these natural features.

One of the most remarkable features of the islands of Georgian Bay is the incredible variety of plants and animals which are found within a relatively small area. It is not unusual because there is a mingling of northern and southern species, those of wet and dry environments, and those associated with both limestone-based and Canadian Shield soils.

The landscape is dominated by the hard Shield rock and by a few hardy plant species suited to rigorous conditions: lichens, white pines, junipers and red oak. Yet there are also small but dense stands of sugar maple and beech. Scattered among the rock outcrops are hundreds of small bogs and ponds. More kinds of reptiles and amphibians live here than anywhere else in Canada, 33 species. In the summer, the black tem, a bird not usually found this far north, is an occasional visitor while the snowy owl, a resident of the open arctic tundra, sometimes wanders this far south in the winter.

The islands and shorelines of Georgian Bay belong to an area of mixed coniferous and hardwood forest known as the Great Lakes - St. Lawrence Forest Region. It is a transition zone between the hardwood forests which extend into the United States and the boreal forests of the Canadian north.

Georgian Bay not only lies within a climatic and forest type transitional zone, but also one of bedrock and soils. Soils developed on limestone are quite different from those of the Shield and Beausoleil has both types.

Glaciation is another factor responsible for the great variety of vegetation and animal life found here. In places, the rock has been scoured of all soil, while in others, thick deposits of till favour growth of hardwood forest. Glaciers have also been responsible for gouging out depressions which have been filled with the ponds and bogs so typical of this area.

Finally, the moderating effect of such a huge body of water, Georgian Bay, must be taken into account. While larger more protected islands may have quite a variety of wildlife, the outer wind-swept and wave-worn islets support little life. Thus on one island you may find a wide variety of orchids, or a forest carpeted with white trilliums, while not far away, another island supports only lichens and wind-resistant shrubs. Overall, however, the bay has an important warming effect which makes the plants and animal life found on its shores and islands different from those found further inland.