Species at Risk in the 1000 Islands Ecosystem

Due to human impact pressures in eastern Ontario and a high level of diversity found along the Frontenac Arch, many rare and vulnerable species are found in and around Thousand Islands National Park. The Committee on the Status of Endangered Wildlife in Canada (COSEWIC) identifies more than 30 species designated as being at risk federally in the 1000 Islands area. Species are assessed under the following categories, which indicate the severity of threat. 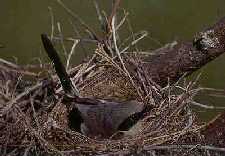 Extinct - A species that no longer occurs in the world.

Extirpated - A species that no longer occurs in Canada, but may occur somewhere else in the world, such as in the U.S.

Threatened - A species likely to become endangered if limiting factors are not reversed.

Special Concern - A species that is particularly sensitive to human activities or natural events and that may therefore became threatened or endangered in the future.

Not at Risk - A species that has been evaluated and found to be not at risk.

Data Deficient - Information has not been collected and reviewed to determine the species' status.

Many of the species at risk in the 1000 Islands region are in peril because their specific habitats are being reduced through human activities or natural changes. Thousand Islands National Park is working with First Nations, provincial parks, conservation authorities, field naturalist groups, land trusts and several other non-profit groups to protect these habitats.

For images of, and to find out more about these and other species at risk, consult the Species at Risk Public Registry.

American Ginseng (Panax quinquefolium): Once an abundant forest floor plant that could be found in colonies of hundreds, American ginseng is now in danger of becoming extinct due to over-collecting and forest harvesting.

The grey or eastern rat snake is Canada's largest snake, growing to lengths of 100 to 256 cm. Factors affecting its population in the 1000 Islands are human persecution and road mortality. The snake is harmless despite its large appearance.

Although this is a widespread species in the United States, it reaches its northern limit of growth in the Niagara Falls and 1000 Islands area. There are only 5 growth stations in Canada– 2 very small ones in Niagara and 3 more extensive populations in the 1000 Islands. In Ontario its preferred habitat is dry, open, rocky woods with a history of fire. It is not usually in open sites or in areas of deep shade.

This is a threatened species because of its proximity to existing trails, a lack of new seedlings, and encroachment by other vegetation. Thus it could decline if it is not actively managed.

This is a small aquatic freshwater turtle that lives underwater most of the time. It exudes a musky odour and has a surly disposition- hence its name. For habitat, it prefers a shallow body of water with a soft bottom and little or no current.

This species is given 'threatened' status. It is threatened mainly by habitat destruction, primarily through wetland drainage and shoreline development. Because stinkspot turtles are very secretive, it is difficult to detect population trends.

This minnow grows up to 6 cm in length. It lives only two years and spawns only once, in either its first or second year. Its habitat is in quiet streams and it cannot tolerate acidic waters. It prefers clear water and its populations may benefit from the clarifying effect of zebra mussels.

Threats are the filling in of wetlands and removal of aquatic vegetation. There is no specific protection for this species, other than the protection of its habitat

Although the black tern is regarded by the COSEWIC as "not at risk" in Canada, it is of special concern in Ontario since its numbers have become very reduced. Like the Least Bittern, the black tern requires marshes with open waters interspersed with mixed vegetation types, a habitat that is threatened by the incursion of cattails.

Other Sensitive Species: The province of Ontario has identified vulnerable and rare species for the province. Species that are listed as being at risk provincially include pitch pine (Pinus rigida) and the southern Ontario population of bald eagle (Haliaeetus leucocephalus alascanus). For more information on provincially listed species, consult the Ontario Ministry of Natural Resources' website.

Reporting a Rare Species: You can help in species at risk recovery by reporting rare species. The Natural Heritage Information Centre keeps track of where species occur to be able to better understand species requirements and status.