The Ecological Integrity Statement (EIS) for Thousand Islands National Park was written in February 1999. It summarizes the key ecological values of the park and sets forth management goals and objectives to achieve ecological health and representativeness in the park area. The following are some of the main points of the document. 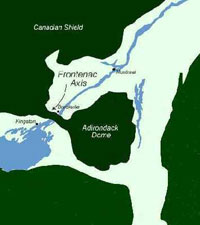 Two landform features, the St. Lawrence River and the Frontenac Arch, dominate the park.  The Frontenac Arch, of which the islands are a part, is a neck of rounded-off granite hilltops that link the Canadian Shield in the north to the Adirondack Mountains in the south. The Arch and its islands serve as a "funnel" for the movement and dispersal of wildlife in a largely settled and agricultural landscape. At the same time, the river is a "filter" or partial barrier to the north-south movement of species.

A combination of geological and climatic characteristics has given rise to a wide diversity of habitats in the park. Botanical diversity is heightened through the presence of a variety of wetlands. Being located in a transition zone, the park, for its size, is rich in biodiversity, and provides habitat for rare species such as the pitch pine and deerberry, which are at the northern limits of their range.

The park's botanical diversity provides a range of breeding habitats which has resulted in a rich bird population, and since the Frontenac Axis acts as a funnel for wildlife movement numerous migrant species are found in the park. The region is also renowned for its high diversity of reptiles and amphibians including the black rat snake and five- lined skink.

Visitor Pressures - being situated along major transportation corridors and the Canada – United States border, the Park receives about 81,000 visitors per year, two thirds of these coming by boat. Without adequate checks and balances, these visitors could have adverse environmental impacts on the park's ecosystem.

Species isolation - any increase in physical isolation leads to genetic isolation and may lead, in the long term, to a decrease in species viability.

Toxins and pollutants - the region is stressed by the presence of sewage, discharges from boats, petrochemicals, pesticides, heavy metals, acidic precipitation and solid waste. These stresses affect water quality, soil chemistry, air quality, and may be contributing to habitat loss, population and community changes, as well as air pollution.

Direct impacts on wildlife - the accessibility of the area contributes to increasing incidents of poaching, vehicle kills and human disturbance of wildlife. Sport fishing provides an extra stress.

The purpose of the park is to protect its rich and significant natural heritage and to encourage public understanding, appreciation and enjoyment in such a manner as to pass it on unspoiled to future generations. Since the park is small and fragmented, the maintenance of its ecological integrity can only be pursued on a regional scale. Staff must work with partners to link the park with other core protected areas, to promote sustainable development in the region, and to building a constituency of support through a program of education and interpretation.