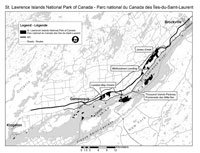 What was once Canada’s smallest national park has doubled in size. In November 2005, Thousand Islands National Park expanded to include 10 square kilometers of ecologically significant land that will now be preserved for generations to come.

The new land consists of three mainland sections located at Landon Bay, LaRue Mills Creek, and Jones Creek. The environmentally valuable properties were acquired through a transfer from the St. Lawrence Parks Commission and through land donations from the Nature Conservancy of Canada (NCC) and private landowners.

Plans for the new land include ecosystem monitoring projects, species at risk studies, and rehabilitating and maintaining hiking trails. In the future, an extensive trail system with interpretive trail guides could link park properties through­out the area.

Most importantly, the new lands will help protect the diverse habitats, rare species, and exceptional landforms of the region. Both Landon Bay and Jones Creek are known for their high levels of biodiversity, and all three properties protect rare species habitat.

Located in the Frontenac Arch Biosphere Reserve, all of the new lands are an important part of a major north/south wildlife corridor that joins Ontario’s Algonquin Provincial Park and New York’s Adirondack State Park.

Other properties acquired by the park since 1998

With its present small land base, Thousand Islands National Park does not fully represent the ecosystem of the greater 1000 Islands area of which it forms a part. The recent land acquisitions have improved this situation with consequent benefits to the ecological health of the park. The park will continue to take advantage of opportunities as they arise to achieve fuller representation of the area. 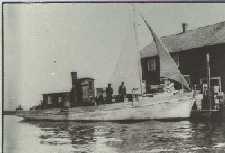 King Cole's fishing tug
From the collection of Brian Osborne

Main Duck and Yorkshire Islands were acquired by Parks Canada in 1977 as nature preserves. This remains the primary intent in managing the islands today.

These two islands became part of Thousand Islands National Park in 1998. Main Duck is 209 hectares (518 acres) in size and Yorkshire Island, very close by, is about 18.9 hectares (47.8 acres). They are in a biologically rich marine area at the eastern end of Lake Ontario, and there are hopes that this part of eastern Lake Ontario will become a marine conservation area.

The two islands are links in a chain of islands in eastern Lake Ontario that stretches from Prince Edward Point near Picton, Ontario, to Stony Point, New York. The island chain is a migration corridor for birds. During annual spring and fall migrations, numerous species have been counted, two of which are designated "Canadian Species at Risk" by the Committee on the Status of Endangered Wildlife in Canada. Henslow's Sparrow is in the ‘endangered' category and the short-eared owl is in the ‘special concern' category.

Canoeing from island to island, the Aboriginal Peoples for centuries used the shelter of the island chain to cross Lake Ontario. Archaeological findings show seasonal occupation of Main Duck Island by the Point Peninsula Peoples, early nomads in the region from about 450 B.C. to 450 A.D. Later evidence reveals the presence of the Owasco Culture (850- 1050 A.D.) and of the Iroquoian Peoples (1250 - 1450 A.D.)

The main shipping channel from eastern Lake Ontario to the St. Lawrence River runs just to the south of Main Duck Island. Over the years many ships have foundered on the treacherous shoals nearby, when strong winds or heavy fogs led them off course. Two thirds of all the shipwrecks in Lake Ontario are reported to be in this marine graveyard.

European settlement of Main Duck Island began in the early 1800s when fishermen established a fishing station there. They came from Prince Edward County and were drawn to the island because of the spawning and feeding grounds for lake trout, whitefish, lake herring and eels in the surrounding waters. The island also provided a sheltered harbour called Fisherman's Cove, and a supply of timber to build shelters and ships. In 1856 the 45 foot schooner, Harriet Anne, was built there by Captain John Walters.

The fishermen continued their annual stay on Main Duck Island even after 1941 when it was bought as a summer place by John Foster Dulles, a prominent lawyer who became American secretary of state in the Eisenhower administration. In 1960, one of Dulles’ colleagues inherited the island, which was purchased by the government of Canada in 1976 to be included in Thousand Islands National Park 20 years later. 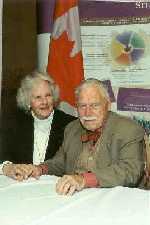 This island of 0.2 hectares (.5 acres), located offshore from St Lawrence Park on the west side of Brockville, was donated to Thousand Islands National Park by Judge John R. Matheson in November, 2000. Judge Matheson was a former member of parliament for the County of Leeds- Grenville, and he had owned the island since 1959. The park will use Victoria Island to illustrate to the public the importance of protecting and presenting ecologically sensitive parts of the Brockville Islands.

There is no dock to the island and camping is not permitted. Access is limited to kayaks, canoes and small boats.

In May 1999, 28.4 hectares (70.2 acres) of ecologically sensitive wetland along Brooker's Creek on the north side of Grenadier Island became part of Thousand Islands National Park.. The property is physically connected with other wetland property in the Park. It is protected as a wetland of high importance for conservation and high resource sensitivity. Two bird species found here, the least bittern and red shouldered hawk, are rated as species of special concern by the Committee on the Status of Endangered Wildlife in Canada. The swamp woods and marshes found here are home to numerous species of breeding birds and are alive with bird song in migration seasons. Reptiles such as the stink pot turtle and Blandings turtle and several amphibian species including a variety of frogs and salamanders thrive in this highly productive habitat.

The property is not easily accessible by the public and will be protected as highly sensitive lands. 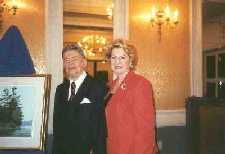 In January 2001 Dr. Stanley Skoryna donated to Thousand Islands National Park approximately 223 hectares (550 acres) of land on Oak Bay on Lower Beverley Lake. Although removed from the main body of the park, it is also situated within the Frontenac Axis corridor. Part of the property is within a regionally significant "Area of Natural and Scientific Interest" ( ANSI) and the south-east portion borders on an important wetland.

The ecological significance of this site is its combination of habitats, including forest cover and wetlands. Unusual features include a large, continuous stand of mature Large- toothed Aspen, areas dominated by Eastern Hemlock and portions with old growth features. Black terns, considered a "species of special concern" in Ontario, have been sighted on the property.

There are no docking or camping facilities on this property and public access is difficult. Because of its ecological importance, this land will probably be kept free of any developments for visitor use.