At 44,741 km 2 , Wood Buffalo National Park is Canada's largest national park and one of the largest in the world. The park was established in 1922 to protect the free-roaming bison herds of the area. Today, the park supports and protects many unique natural and cultural resources, from diverse ecosystems and rare species to the traditional activities of Aboriginal residents. As a remote wilderness park and World Heritage Site, Wood Buffalo National Park attracts Canadian and international visitors who wish to experience and learn about the unique cultures, landscapes and wildlife of the boreal north.

In 1983, Wood Buffalo National Park became the eighth site in Canada to be granted World Heritage status by UNESCO (United Nations Educational, Scientific and Cultural Organization). Inscription on this list confirms the exceptional universal value of a cultural or natural site which deserves protection for the benefit of all humanity.

The outstanding characteristics of Wood Buffalo that led to its designation include: 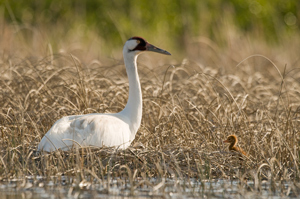 In 1982, the International Union for the Conservation of Nature (IUCN) recognized that Wood Buffalo protected two wetland areas of international significance — the Peace-Athabasca Delta and the whooping crane nesting area. These areas were designated as Ramsar sites — a designation by the Ramsar Convention which focuses on identification and protection of critical habitat for migratory birds.

The last remaining nesting area for the endangered whooping crane is the other designated Ramsar site, located in the remote north-central corner of the park. It is a fragile complex of marshes, shallow ponds and lakes, streams and bogs.

The Northern Boreal Plains is characterized by its flat topography. It is poorly drained, with elevations ranging from 210-300 metres above sea level. The plain is underlain by Devonian period sedimentary bedrock (gypsum, halites, dolomite and limestone) and covered by glacial deposits of varying thicknesses. 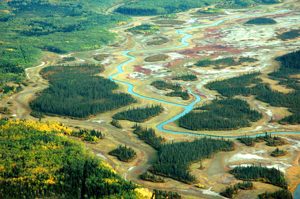 The uniform relief, porosity and solubility of the bedrock have produced a drainage type that is primarily vertical and percolating rather than horizontal across the surface of the land. Water percolating through the soil and bedrock causes saturation of the plains surface. This has created karst landforms in areas of gypsum bedrock. Other phenomena include salt flats, underground streams, sinkholes and saline streams.

The boreal plains are a mosaic of muskeg, meandering streams, shallow lakes and bogs, and boreal forest. The forest is comprised of white and black spruce, jackpine, balsam fir, aspen and poplar. Fire is a natural force in the boreal plains. The most outstanding topographic features are the major rivers — Athabasca, Peace and Slave — and the biologically productive Peace-Athabasca Delta.

The animals that inhabit this ecosystem are typical of the northern boreal forest. Rare or endangered species such as bison, whooping cranes and peregrine falcons are also found. For more information on park wildlife, please read the section on wildlife viewing .