Flooding in the Peace-Athabasca Delta 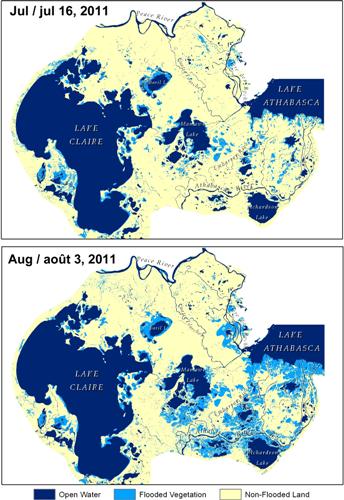 Flooding in the Peace-Athabasca Delta, 2011

The Peace-Athabasca Delta (PAD) is one of the world’s largest freshwater deltas, a highly productive boreal oasis of biodiversity. It is recognized as a global treasure through its designation as a RAMSAR Wetland of International Importance, and is one of the main features distinguishing Wood Buffalo National Park as a World Heritage Site. Aboriginal people have depended upon it for centuries to sustain their culture and lifeways.

Spring and summer floods are required to maintain wetland habitats in the delta. WBNP uses satellite imagery, local land/water based and aerial observations to monitor flood events. In 2020 the delta experienced a notable summer flood event. The images below show water extent before flooding (June 16th)and after water levels on the Peace and Athabasca rivers had peaked (August 3). The flood was created by high flows on the Peace River which obstructed outflow and created reverse flows into the delta at the same time that high flows were occurring on the Athabasca River. These two events, then, created high water levels on Lake Athabasca, Mamawi Lake and Lake Claire, and associated flooding of lake margins and perched basins, mainly in the delta's Athabasca sector (including south of Mamawi Lake).

"Right click and Save" here for large JPG version of map