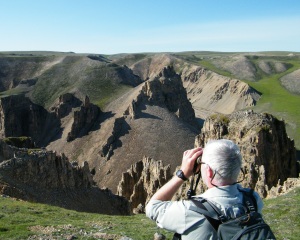 Inuvik is the largest community in the region and is serviced daily by scheduled aircraft from southern Canada. Aklak Air is presently the only scheduled aircraft carrier serving the community of Paulatuk. Scheduled flights between Inuvik and Paulatuk are currently on Tuesday, Wednesday and Friday. Schedules may be subject to change. There are no roads or trails leading directly to Tuktut Nogait from Paulatuk.


Accessing the park by land

Contact the Parks Canada office in Inuvik for assistance with land travel options.


Accessing the park by water

The coastline of Darnley Bay in the Amundsen Gulf is an attractive starting point for many visitors wishing to hike into Tuktut Nogait, particularly the Brock and Hornaday River Deltas. Boat shuttle services are periodically offered by local operators to carry visitors between Paulatuk and the coastal shores to the northwest of the park. Contact the Parks Canada office in Inuvik for assistance with boat shuttle options.


Accessing the park by air

There are no ground based landing-strips, only water based landings are permitted in Tuktut Nogait. Known water base landings include, but are not limited to: Uyarsivik Lake/ Cache Lake, Canoe Lake, Long Lake, One Island Lake, Seven Island Lake, Akluk Lake, Brock Headwater Lakes and Hornaday Lake. Charter aircraft may be arranged from Norman Wells and sometimes Inuvik.