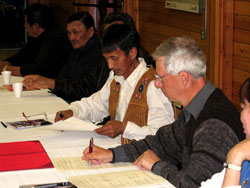 August 1, 2005: The Honourable Stéphane Dion (on right), Minister of the Environment and the Minister responsible for Parks Canada, and Mr. Raymond Taniton (centre), President of the Déline Land Corporation and representing the Sahtu Dene and Métis of the Sahtu Settlement Area, signed the Impact and Benefit Plan to add 1,850 km2 to the south end of Tuktut Nogait National Park of Canada. At left: Elder Louis Taniton of Déline.
© Parks Canada

In August 2005 the Honourable Stéphane Dion, Minister of the Environment and Minister responsible for Parks Canada, and Mr. Raymond Taniton, President of the Deline Land Corporation and representing the Sahtu Dene and Métis of the Sahtu Settlement Area, signed an impact and benefit plan that added an additional 1,850 km2 to the southern regions of Tuktut Nogait National Park of Canada. The plan was also signed by the Honourable Ethel Blondin-Andrew, Minister of State for Northern Development and Member of Parliament for Western Arctic, and Chief Walter Bayah of the Deline First Nation.

“With this agreement, we have taken an important step toward the completion of Tuktut Nogait National Park,” said Minister Dion. “By expanding the park into the Sahtu Settlement Area, we are providing additional protection to the habitat of the Bluenose caribou herd, which is so important to the Sahtu Dene and Métis people, creating local economic opportunities that will contribute to the vitality of Aboriginal communities in the region, and protecting this unique natural region of Canada for all Canadians.”

“The agreement we signed today supports the environmental objectives of our Northern Strategy and creates new economic opportunities for the Sahtu Dene and Métis,” said Minister Blondin-Andrew. “It also offers a new opportunity for local Aboriginal communities to be involved in the management of the park.”

“Today we have ensured that the calving grounds of the Bluenose caribou herd, which have played an important role in the lives of our people for thousands of years, will be protected” said Mr. Taniton. “This is a special day and a special place for the people of the Sahtu region, a place that will be protected for the next generation of our people.”

“Our ancestors' left their imprints on the land many years ago and today we are here to acknowledge them and celebrate our future,” said Chief Bayha.

Tuktut Nogait National Park of Canada was established by Parliament in 1998 as a result of an agreement that was signed in 1996 by the Government of Canada, the Government of the Northwest Territories, the Inuvialuit Regional Corporation and the Inuvialuit Game Council. Approximately 16,340 km2 of the Tundra Hills Natural Region of the national park system were protected through the agreement, which also provided for the expansion of the park into the Sahtu Settlement Area to the south and into Nunavut to the east.

The park's primarily arctic tundra and barren lands are home to rich populations of caribou, musk oxen, grizzly bears, wolves, red foxes, wolverines, arctic ground squirrels, and collared lemmings, as well as to migratory birds, including peregrine falcons and golden eagles, and to fish such as arctic char, grayling and lake trout.

Negotiations toward the expansion of the park into the Sahtu Settlement Area were initiated in 2000 at the request of the Sahtu Lands Corporation. With the agreement and the addition of Sahtu Settlement Area lands to the park, it now protect the tablelands of the Hornaday River Plateau and areas of spruce forest, and offers further protection to the headwaters of the river and to the calving grounds of the Bluenose caribou herd.

The agreement also contains provisions to enhance and support local employment and businesses, and to foster collaboration between the local community and Parks Canada in the operation and management of the lands added to Tuktut Nogait National Park. As well as encouraging the integration of traditional ecological knowledge into future park planning and decision-making, the agreement ensures the continuation of Sahtu Dene and Métis traditional wildlife and plant harvesting activities within the addition.

“Aboriginal people have been living here for millennia,” said Minister Dion. “Their unique knowledge of these lands, and of how to use them in a sustainable way is invaluable. Their understanding of the changes that have occurred in the north due to climate change, pollution and other stressors, and their traditional knowledge, can help us to protect the ecological health of the park and to present its story to Canadians. Today is about collaboration, and working together toward shared goals.”

Another key aspect of the agreement was its provisions to foster greater understanding and respect for the Sahtu Dene and Métis's culture and heritage, as well as for the region's cultural resources. The Sahtu Settlement Area is home to three national historic sites of Canada, including Saoyú and ?ehdacho which are of great spiritual and historical significance to the Sahtu Dene – as well as the Déline Fishery and Franklin's Fort.