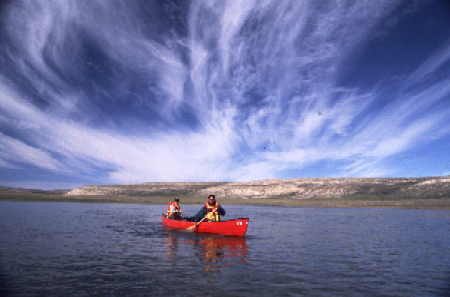 The Hornaday River, with its awe-inspiring canyons and waterfalls, is one of the main features of Tuktut Nogait. 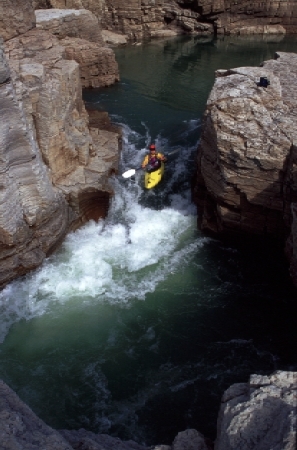 The river flows through Tuktut Nogait National Park before joining the Arctic Ocean, 14 kilometres east of the small community of Paulatuk.

With its open, easy terrain and spectacular scenery, Tuktut Nogait is a hiker’s paradise. The optimal hiking season extends from mid-June until mid-August. A particularly beautiful time to visit is the end of June, when the caribou are migrating and the wildflowers are blooming. Hikes can be extended into the third week of August when the autumn colours are at their peak. However, hikers traveling that late in the season could encounter winter-like conditions and delays due to heavy fog.

There are no designated trails in Tuktut Nogait. Hikers follow approximate routes, navigating by unmistakable landmarks such as creeks, rivers, valleys, lakes, eskers, and hills. Hiking route descriptions for the park are available from the Parks Canada office in Inuvik. 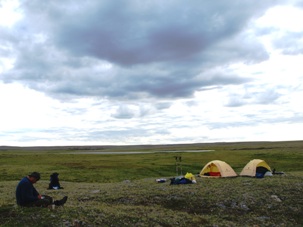 There are no designated campsites in the park. You may camp on any durable surface (e.g. gravel, rock or sand), except at archaeological sites. Look for rock arrangements such as tent rings and food caches before setting up camp. If you see any of these features leave the site undisturbed and set up camp in an alternate location.

Keep the landscape authentic; refrain from building markers or cairns (Inuksuit). If using rocks for stabilizing camp please disperse them when breaking camp.

In order to protect this pristine wilderness, all visitors are expected to practice low impact backcountry etiquette. Campfires are prohibited in the Tuktut Nogait National Park. 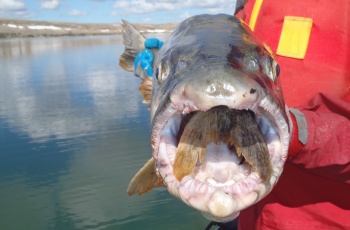 Large fish with small fish in its mouth

Tuktut Nogait is known for its good fishing. Arctic char and lake trout are the primary species caught. For those wishing to fish in the park, two types of Parks Canada fishing permits are available from the Inuvik Parks Canada office: an Annual permit or a day permit. The annual fishing permit is valid for one year in the park for which it is sold.

Anyone under the age of 16 may fish in national parks without a permit if accompanied by a permit holder 16 years of age or older. However, their catch is then included within the permit holder's daily limit. They may also purchase their own permit and be entitled to the full catch limit.

The daily catch and possession limit is 1 of any species (Arctic char, grayling, whitefish or lake trout). When angling, it is unlawful to:

If you plan to fish on the privately-owned Inuvialuit lands outside the park, you must register with the Paulatuk Hunters and Trappers Committee  and carry a Government of Northwest Territories Fishing Permit. National park fishing regulations do not apply to beneficiaries of the Inuvialuit Final Agreement.
Arctic char

Identification:
Notes:
Arctic char have the most northerly distribution of any freshwater fish. Although they seem to eat just about any small creature that is available to them, Arctic char grow slowly. They reach their full size at an average of 20 years, though some may live to 40.

Identification:
Notes:
In most waters, lake trout rely heavily on small fish like ciscoes, smelt, or sculpins. But in some lakes, they feed almost exclusively on plankton, insects, or crustaceans. Lake trout are slow-growing and long-lived, sometimes reaching an age of 60 years. In the far north, it may take 15 years for a lake trout to reach 2 pounds.

Identification:
Notes:
Arctic grayling are one of the most beautiful fish in the arctic. Males use the distinctive dorsal fin as part of a threat display when spawning.

Identification:
Notes:
Their diet consists mainly of small clams, snails, aquatic insects, larvae, and freshwater shrimp. In both species, the head is small and the body deep or wide from stomach to backbone.

If you plan to fish on the privately-owned Inuvialuit lands adjacent to the park, you must register with the Paulatuk Hunters and Trappers Committee. Tel: (867) 580-3004.

Tuktut Nogait is rarely visited in the winter. The most suitable time for ski touring or snowshoeing in the park is from late March until early May, when the days are longer and the temperatures are generally warmer than in the early winter. Weather can still be extremely variable with temperatures ranging from above zero with mild, warm and melting conditions to falling well below -30° C with blowing snow and extreme wind. Please contact the Parks Canada office for more information on winter travel in the park.