You are in bear country

A Guide to Safety

National Parks introduce visitors to a landscape that is uniquely Canadian. But these parks are more than scenic wonderlands. They are home to many animals that depend on wilderness areas for their survival. For some, like the grizzly bear, national parks may be the critical core of a territory that can extend far beyond the park boundaries.

The following guidelines to safety in bear habitat are just that–guidelines. Bear behaviour is hard to predict because they are complex animals. Each bear is an individual with the potential to react differently in different situations. The information that follows will give you some basics on how to avoid an encounter in the first place and guidance on how to react should one occur.

Bears are extremely sensitive to the stress of human activity. You can actually help protect these animals by avoiding encounters with them. Cyclists!

Your speed and quietness put you at risk for sudden encounters. Make noise, stay alert, slow down. 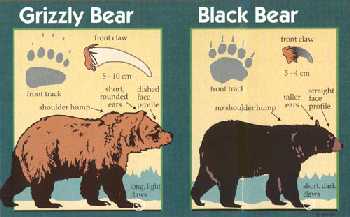 Report all sightings to park staff