The South Nahanni River originates in the Selwyn Range of the Mackenzie Mountains, 200 km northwest of the western park boundary. It is characterized by a strong seasonal fluctuation in flow. River flows are dominated by the spring thaw, with a peak discharge in June followed by relatively high flow levels in July, August and September. During summer, the river is also susceptible to flash floods due to precipitation. The water levels are low in the autumn and winter months. The South Nahanni's average gradient within the park is 1.4 m per kilometre. 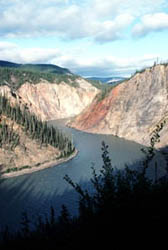 Most of the South Nahanni watershed consists of steep mountain valleys, glacial debris and old lake bed deposits. Rivers and streams are the dominant aquatic features of Nahanni National Park Reserve. In general, peak flows occur in late June as a result of snow-melt at higher elevations. Discharge declines over the summer months but is significantly influenced by precipitation. Many streams are seasonal, and the contribution of groundwater to stream flows is unknown.

There are relatively few lakes in the park. The four largest lakes range in size from 61 to 345 hectares. All other lakes are smaller, with sizes less than 25 hectares. Standing water in the park varies from unproductive high glacial meltwater basins at high elevations, to shallow, slightly more productive lakes at low elevations. As a result of this variety, the diversity of species may vary from lake to lake. Shallow low-elevation lakes generally support a greater diversity of aquatic fauna than higher elevation lakes, although many do not contain fish. The open water season is relatively short in Nahanni.

Nahanni National Park Reserve presents a unique challenge for the management and protection of its aquatic resources. One factor is the park's northern latitude which influences the productivity of aquatic life in the rivers, lakes and streams. Slower fish growth in the north increases the potential that populations may be depleted due to overfishing. Another factor is that the park protects only a small portion (one-seventh) of the entire South Nahanni watershed. This increases the risk of adverse effects on aquatic species due to upstream resource extraction activities or other developments beyond the park boundary. To help mitigate some of these concerns, park staff work closely with outside stakeholders within the Greater Nahanni Ecosystem .