Nahanni National Park Reserve is located in the northern section of the cordilleran physiographic region. The park area is mostly mountainous, with a diversified topography which includes mountain ranges, rolling hills, elevated plateaux, broad depressions, and incised river valleys. Elevations range from 180 m ASL (above sea level) at the eastern park boundary to a peak of 2640 m ASL in the Ragged Range in the park's northwest. 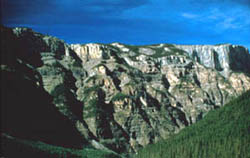 Three major events influenced the geology of Nahanni National Park Reserve. The first was a long period of sedimentary rock deposition during the Palaeozoic era, 200 to 500 million years ago. During that period, oceans covered the area, depositing up to 6000 metres of sedimentary rock. The rock consisted of sandstones, mudstones and shales from continental rivers, and limestones and dolomites from marine animal skeletons and dissolved minerals.

The second event was the deformation and uplift of the sedimentary rocks by continental drift forces to form mountain ranges, a process which began around 200 million years ago. Dramatic mountain-building began approximately 110 million years ago when molten volcanic rock from deep within the earth rose to within 3000 m of the surface where it hardened and cooled. This force pushed up the sedimentary rock above and around the intrusion, creating the mountain ranges that surround the Nahanni River. Even today, the land is still rising in the east end of the park.

The third significant event was glaciation, which first occurred between two and eight million years ago. Since then, the landscape has been influenced primarily by continental erosion, with short episodes of glacial action interspersed with longer periods of river erosion. The last glaciation, which ended 10 000 years ago, only reached the far eastern and far western portions of the park.

This mountain range, located along the northwest boundary of the park, gets its name from a spectacular formation of ragged granite peaks. They are the highest peaks in the Northwest Territories and contain extensive glaciers. They were formed 110 million years ago when molten igneous rock was injected into the earth's crust from the underlying mantle. As it hardened and cooled, it pushed the sedimentary rock up from below. Over time, the upper layers of sedimentary rock eroded, exposing the hard granite of the Ragged Range. The last glaciation, which ended 10 000 years ago, sculpted the formation which is seen today.

At Rabbitkettle, and other hot springs in the park, water bubbles to the surface from deep beneath the earth, warmed by the same volcanic energy that induced the formation of the Ragged Range. The Rabbitkettle tufa mound is the largest in Canada and a key point of interest in Nahanni. Tufa mounds are created by the precipitation of dissolved minerals, primarily calcium carbonate, from thermal spring water. In Nahanni, this water retains a temperature of 20o C year-round. As the warm mineral water pours from the spring, it radiates outwards over the surface of the tufa mound. Calcium carbonate precipitates out of the spring water and hardens to form tufa. As the calcium carbonate hardens, it forms series of intricate terraces and basins known as rimstone dams and gours. The North Mound, believed to be 10 000 years old, is 30 m high and 60 m in width. The tufa mounds are very fragile and are accessible only through guided hikes with park staff.

Certain places in the park such as Rabbitkettle Hotsprings, also known as Gahnhthah or kettle, have special meaning in the lives of Dene and Métis people. Gifts such as tobacco and matches have been left at the springs to bring good luck. It was said that as long as the kettle was overflowing it was a sign of good luck, but if the kettle was empty it was a sign of bad luck.

Virginia Falls is where the South Nahanni River picks up speed, transforming from a wide placid river to a raging torrent which plunges in a spectacular curtain over a vertical drop of 92 m. The falls are divided by a central rock stack which has resisted erosion as the falls migrated upstream. The gradual erosion of the falls created Fourth Canyon, the first of a series of four spectacular deep canyons downstream.

Downstream of Fourth Canyon is Third Canyon, a 40-km stretch which gashes through the mountains of the Funeral Range. Its long colluvial slopes are a mixed strata of shales, sandstones and limestones. Key features of Third Canyon include The Gate, where the river makes a sharp hairpin turn and squeezes through a narrow gap flanked by a vertical limestone wall that is 460 m high, and Pulpit Rock, a distinctive pinnacle seen on the east side of the gap.

At Second Canyon, the South Nahanni River bisects another mountain range, the Headless Range. This section is only 15-km long and leads into Deadmen Valley. Beyond Deadmen Valley lies First Canyon, the most spectacular of the four canyons. Here the Nahanni River has cut through the resistant limestone, creating the highest and most awe-inspiring vertical canyon walls in the park.

This is a beautiful area where the river calms between Second and First Canyons. The Tlogotsho Plateau forms a dramatic backdrop, and a massive alluvial fan dominates the area. The fan is an important nesting area for sandpipers and other shorebirds. Mineral licks in the area attract Dall's sheep and other ungulates.

Legends of tropical forests likely stem from these hotsprings. There are two thermal water sources, one in the small channel behind the meadow and the second along the bank of the river. Although the spring water contains all the mineral components of tufa, the high level of hydrogen sulphide prevents the tufa from forming. As the water surfaces, emitting the odor of rotten eggs, the sulphur dissolves any tufa before it can be deposited. The hotsprings were named after Mary and Gus Kraus who resided there between 1940 and 1971. The only structure remaining is a small cabin which functioned as an outbuilding. Garden parsnip and a few other exotic plants grow in the area, a legacy from the Kraus' garden.

At the Sand Blowouts, outcrops of white sandstone have been eroded by the wind into formations of softly rounded domes, pedestals and arches. Fine sand, mixed with sandstone spheres ranging in size from marbles to tennis balls, surrounds the area. The entire setting seems more evocative of a beach or desert environment rather than its actual location in a pine forest high on a mountain.