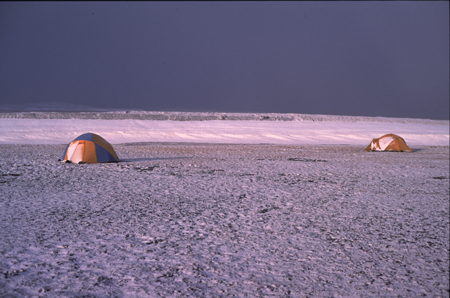 The weather in Aulavik can be extremely hostile. Average July temperatures in Sachs Harbour range from 2°C to 10°C. On occasion, summer temperatures can soar as high as 25°C, although sub freezing temperatures, ice-cold winds and snow are just as likely. Due to the usual presence of sea ice in M'Clure Strait, fog is a frequent companion in the north end of Aulavik. Winds can be very strong and prolonged throughout the park.

Careful trip planning and packing are essential. All parties must carry appropriate equipment, as it is unlikely that other visitors or park staff will be encountered. There is no natural protection in the open tundra, no facilities, and no firewood. Park visitors must bring sufficient warm clothing and rain gear, as well as plenty of fuel for their portable stoves.

Strong winds, precipitation or fog may impede travel in the park and may result in flight delays. Make sure to carry at least two extra days' worth of food and fuel in case of a delayed pick-up.

Hypothermia, due to cold water, wind, precipitation and cool temperatures, is one of the greatest hazards to park visitors. Hypothermia is the cooling of the body core temperature to below 35°C.

To avoid hypothermia: dress appropriately, avoid exposure by protecting high heat loss areas, eat high energy foods, immediately change out of damp or wet clothing, and avoid travelling in extreme weather. Learn to recognize the signs of hypothermia and be prepared to treat them. Be aware that campfires are strictly prohibited in the park. It will be impossible to dry out clothing during bad weather periods.

Visitors are advised to fine filter (<0.5 microns), treat (iodine or chlorine in warm water), or boil their drinking water. To prevent the spread of diseases, human waste should be disposed of in a responsible manner.

While rabies is prevalent on southern Banks Island, the distribution of rabies in Aulavik is unknown. Rabies is a serious disease that affects the nervous system and brain. Usually, rabies is spread when a rabid animal bites another animal or person. In the park, animals such as foxes, wolves and caribou may carry the virus.

Be suspicious of any friendly or unusually bold animals. As a general rule, keep a safe distance from all wildlife and remember that it is illegal under the National Parks Act to touch, feed, approach, or entice wildlife.

If you come across a fox carcass, please report its location to park staff at the earliest convenience.

Biting insects, such as mosquitoes or black flies, can be a nuisance on warm, calm days.

However, the usual cool temperatures and frequent winds generally keep them at bay. Visitors should consider bringing a small supply of insect repellent, a bug jacket and a bug hat.

The polar bear is the largest land carnivore in the world. Unlike other bears, the diet of the polar bear consists almost exclusively of meat, and any animal is potential prey.

To reduce your chance of encountering a bear:

Under no circumstances should you approach a polar bear. If a bear is encountered, noise-makers such as bear bangers and air horns may scare the bear away. Pepper spray, used at close range, may deter polar bears, but it has not been thoroughly tested. Firearms are strictly prohibited. However, Inuvialuit beneficiaries licensed to work in the park can be hired as armed bear monitors.

For more information read the brochure Safety in Polar Bear Country, available from the Park Office in Inuvik.

You will undoubtedly come in contact with many muskoxen during your trip. While normally docile, muskoxen can, on occasion, initiate unprovoked charges. The likelihood of this increases as the bulls enter the rut towards late July. Remember, these are wild animals. Do not approach them, and where possible, keep a physical barrier such as a ravine, pond or creek between you and the muskoxen.

The topography of Aulavik is diverse. Though the Thomsen River Valley is broad and flanked by gently undulating hills, a variety of other terrain exists. The badlands and canyons in the eastern area, cliffs along the northwest coastline, and steep slopes and high river banks throughout the park all have inherent hazards. Stone, mud and snow slides are a potential danger on the steep and unconsolidated slopes in the park, especially in the vicinity of canyons and cliffs. 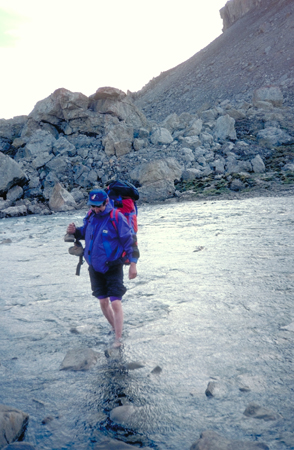 Fording a creek
© Parks Canada / Wayne Lynch
You may encounter creek crossings when hiking in the park. These crossings are usually easy but can lead through knee-deep, fast-flowing, cold water. Due to the presence of permafrost and thin vegetation cover, spring runoff or heavy rainfalls can cause sudden and substantial changes in water levels. Such a change can cause a planned creek crossing to become impossible and force travelers to choose an alternate route.

Fording the major rivers of the park (such as the Thomsen) may be difficult early in the summer. Exposure to the cold water temperatures of creeks and rivers can quickly lead to hypothermia.

When crossing creeks, we recommend you:

While there are no designated routes or trails in Aulavik, the terrain is gentle enough that hiking is possible practically anywhere. However, orientation in this vast, and sometimes featureless landscape can be challenging. Compasses are unreliable in the park. We recommend you carry a good quality Global Positioning System (GPS).