Though people have lived in this part of the Arctic for almost 4,000 years, Banks Island has always been a land on the edge. Human use of the area that is now Aulavik National Park has been sporadic and greatly influenced by climate change. During warmer periods, often lasting hundreds of years, parts of the island were occupied. During colder cycles, the inhabitants moved to areas that were more hospitable, occasionally returning to hunt or fish on the island.

The earliest archaeological sites found within Aulavik National Park are near Shoran Lake. These Pre-Dorset cultural sites date back to almost 1500 B.C and are characterized by oval dwellings, usually outlined by a ring of stones that held down the edges of a tent. Site excavations have revealed flint scrapers, bone harpoon heads and needles. The bones of hundreds of muskoxen indicate that, even then, this species was a vital source of food and provisions.

From approximately 800 B.C to 1000 A.D, people seldom visited the northern half of Banks Island. The few sites found from that time period, located mostly along the island's south coast, have characteristics of both the Eastern Arctic Dorset culture and their Western Arctic counterparts.

During the period of 1000 -1450 A.D. Thule peoples occupied several sites along the south coast of Banks Island and made some use of what is now Aulavik National Park. At the coastal sites, the Thule peoples practiced an economy based on harvesting sea mammals, particularly bowhead whales and ringed seals. It also appears that they ventured into the northern reaches of the island to harvest muskoxen.

A major climatic cooling, known as the Little Ice Age, probably ended most occupation on Banks Island for several hundred years. The deteriorating climatic conditions forced the Thule people to seek refuge in a smaller region where they developed very effective and specialized hunting skills. As the climate warmed, the now isolated groups wandered farther. They re-established themselves as several closely related but locally distinct groups of Inuit . One of these groups, the Mackenzie Inuit, or Inuvialuit, occasionally used Banks Island between 1650 and the 1820's. They occupied sites along the southern coast and hunted muskoxen in the area that is now the park. 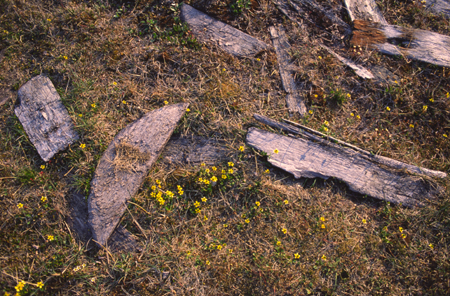 Exploration of the area by Europeans began in the early 1800's. In 1820, Beechy, a member of the first Parry expedition, saw land to the southwest of Melville Island and christened it Banksland to honour a past president of the Royal Society.

Europeans did not actually visit Banks Island until thirty years later. In 1850, the H.M.S. Investigator, under the command of Captain Robert M'Clure, came in search of the Northwest Passage and the lost Franklin Expedition. In September 1851, his ship became trapped in the ice at Mercy Bay at the northern end of Banks Island. In 1853, after almost two years locked in the pack ice, the ship was abandoned and the crew walked over the ice to Melville Island where they were rescued by the HMS Resolute. Later, the Investigator either sunk or drifted away. Today, all that is left of the site on the shores of Mercy Bay are wooden barrel staves, a coal pile, and a large piece of metal. 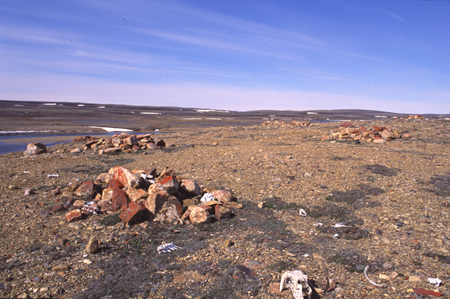 During the period of 1855 to 1890, Copper Inuit from Victoria Island made annual trips west to Mercy Bay, via the Thomsen River valley, in order to salvage wood, metals and other valuable materials from the abandoned Investigator site. Campsites from this era are found along the Thomsen River and are dominated by caches for storing muskox and caribou meat. These sites also contain tent rings, hearths and possible graves. 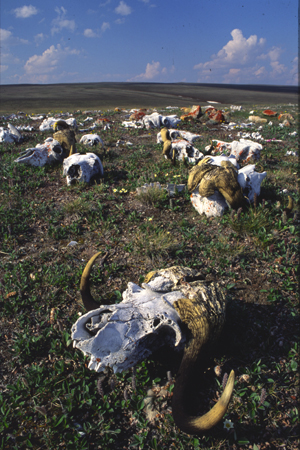 Head Hill Archaeological Site
© Parks Canada / Wayne Lynch
One of the more spectacular sites, Head Hill, is a network of kill sites on a hill overlooking the confluence of the Thomsen and Muskox Rivers. This site contains over 500 muskox skulls, 29 food caches and 17 tent rings.

From the late 1920's until the decline of the fur trade in the1970's, lucrative arctic fox trapping drew Inuvialuit to Banks Island from the Mackenzie Delta, Victoria Island, the Tuktoyaktuk Peninsula, and Alaska's North Slope. Families converged at the southwestern tip of Banks Island and set up the permanent community of Sachs Harbour.

Today, Sachs Harbour is home to approximately 120 people. In keeping with their cultural traditions, the Inuvialuit residents have been guaranteed the right of continued subsistence trapping, hunting and fishing within the national park boundaries. While residents occasionally use the north end of the island, Aulavik is seen as a reservoir for sustaining regional wildlife populations.