Aulavik National Park is a pristine arctic wilderness area located on northern Banks Island, the most westerly island in the Canadian Arctic Archipelago. The park protects an area of the Western Arctic Lowlands, a representative natural region of national significance.

To learn about past and current research and monitoring activities in Aulavik, contact the Park Office in Inuvik.

The climate of Aulavik National Park is typically arctic. The tundra is frozen and snow-covered from September until June. Summers are brief and cool. The sun does not set between mid May and late July, and there is never true darkness from late April until late August. 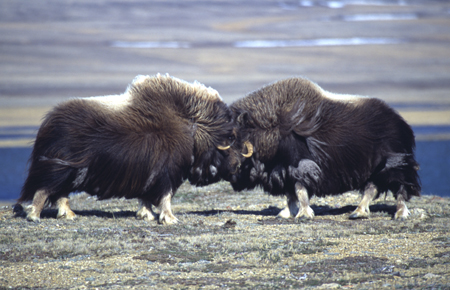 Banks Island's most abundant large mammal is, by far, the muskox. This species has experienced a dramatic increase in numbers over the last fifty years. Recent estimates (2001) place the islands muskox population at more than 68,000 and it is thought that 20% of these reside in the park. Considerable effort by Government of the Northwest Territories, Inuvialuit, and Parks Canada biologists is being directed towards understanding the growth of the muskox population and the impacts it may be having on the ecosystem. 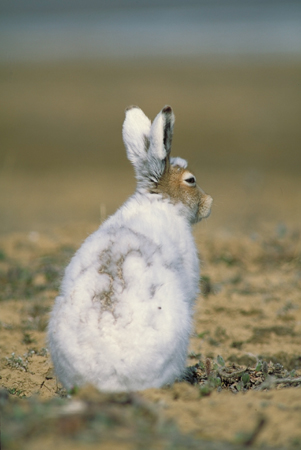 Arctic Hare
© Parks Canada / Wayne Lynch
Aulavik is also home to Peary caribou. The Banks Island population of Peary caribou was classified as endangered in 1991 due to a dramatic decline in numbers.

Recent findings suggest that while the population is low, it is considered stable and potentially recovering. Current research, led by the Government of the Northwest Territories, is looking at population levels, seasonal habitat use, range conditions, and predation, in order to better understand the population decline.

A variety of other mammals are found in Aulavik including arctic foxes, arctic wolves, ermines, arctic hares, and both brown and collared lemmings. Marine mammals along the north coast include polar bears, ringed seals, bearded seals, beluga whales and bowhead whales. 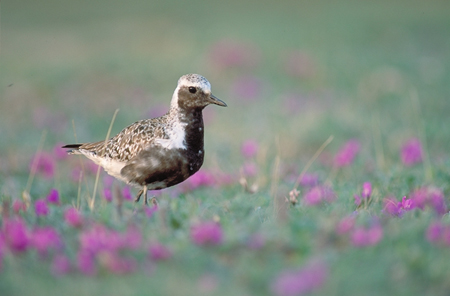 Over forty-three species of birds make seasonal use of Aulavik, though only ptarmigan and ravens are considered permanent residents. Thirty-two bird species have been recorded as breeding within the park. Breeding bird densities are generally low, with the most abundant species being: lapland longspurs, horned larks, black-bellied plovers, long-tailed jaegers and sandhill cranes. Other breeding species include: red-throated loons, yellow-billed loons, sanderlings, semipalmated sandpipers, ruddy turnstones, red phalaropes, Sabines gulls, water pipits and snow buntings. For a list of birds that are frequently observed in this region of the western Arctic, click here.

Birds of prey in Aulavik include snowy owls, rough-legged hawks, gyrfalcons, and peregrine falcons. The abundance of these species depends greatly on the abundance of lemmings. When the multi-year lemming cycle is low, so too are the numbers of those bird and mammal species which rely upon the lemming as a primary food source.

There are two Migratory Bird Sanctuaries on Banks Island, one in the northern part of Aulavik National Park and the other covering the southwest corner of Banks Island. These two sanctuaries protect the seasonal nesting and moulting grounds of the Western Arctic's 500,000 lesser snow geese. On most flights into the park you will be able to see thousands of these majestic birds across the island.

It is possible that the Thomsen River watershed is the most northerly example of a multi-species freshwater fish community. Farther north, there are only arctic char and nine spine stickleback, or single species communities of arctic char. The Thomsen watershed is home to six freshwater species: lake trout, arctic char, least cisco, lake cisco, nine spine stickleback and fourhorn sculpin. Only lake trout is an exclusively freshwater species; the other five can spend a portion of their lives in salt water.

Overall, very little is known about the ecology of char on Banks Island. The Thomsen River is noted as important spawning and nursery habitat for arctic char, and landlocked arctic char are found in several of the larger lakes in the park such as Nangmagvik. 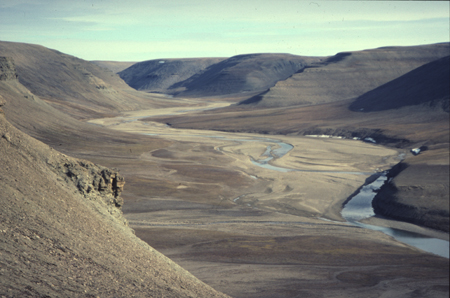 Aulavik National Park contains a wide diversity of landscapes. The Thomsen River is characterized by a broad, lush valley flanked by gently undulating hills. Along the northwest coast of Aulavik, sheer cliffs rise several hundred metres from the waters of MClure Strait. The central portion of the northern coastline is dominated by Castel Bay and Mercy Bay, which cut inland as much as 15 kilometres. To the southeast of Mercy Bay, steep canyons dominate the landscape. Further south, a sparsely vegetated upland plateau rises to a height of 450 metres above sea level and forms a height of land between the Thomsen River and Prince of Wales Strait. West of Castel Bay, arid desert-like badlands predominate. The main tributary of the Thomsen River is the Muskox River. The Muskox River flows into the Thomsen from the west and is characterized by poorly drained wetlands and frost polygon features.

In the past, glaciers covered the majority of the park, resulting in features such as terminal moraines, eskers, and drumlins. The lack of these features in the very northwest corner of Aulavik National Park suggests that area may not have been glaciated.

Some of the oldest rock formations found in the park (350 million years old) represent a marine reef, thought to have formed offshore of an ancient seacoast. Fossil life forms, such as gastropods (snails), brachiopods (lamp shells), corals, and crinoids (feather stars) can be found in this ancient reef east of the Thomsen River. 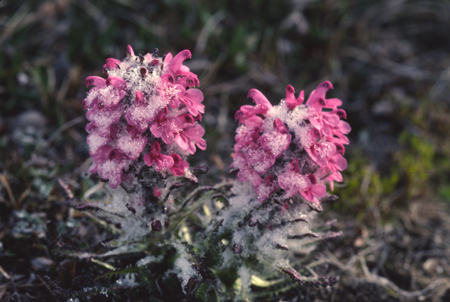 Banks Island is treeless. Indeed, the tallest plant, the arctic willow, generally grows no higher than your shin. More than 150 species of flowering plants have been documented in Aulavik. While the growing season is very brief, the continuous sunlight from late May until late July provides enough energy for the vegetation to carry out its annual cycle. The growing season peaks in early July when a myriad of colours from a variety of flowering plants carpets the valleys and hillsides. The most vibrant growth occurs on the south facing slopes of hills that are sheltered from the wind and have the greatest exposure to the intense summer sun. By late July most of the herbs have gone to seed and the grasses have cured. Autumn in early August witnesses the low arctic willows turning orange for a brief period before the onset of another arctic winter.