On May 18, 2010, the Honourable Jim Prentice, Canada’s former Minister of the Environment and Minister Responsible for Parks Canada, and the Honourable John MacDonell, Nova Scotia’s former Minister of Natural Resources, announced that the governments of Canada and Nova Scotia accepted the Task Group’s recommendation and would take the necessary steps to designate Sable Island as a national park under the Canada National Parks Act for the benefit of current and future generations.

Between June and September of 2010, a public engagement process was undertaken by Parks Canada in order to collect input on the proposed national park for Sable Island. The passion for and great interest Canadians have in Sable Island is evident in the submissions received from across Canada and abroad, expressing support and highlighting ideas, concerns and visions for the future of Sable Island as a national park. Parks Canada received approximately 2,800 responses, including comments at the open houses, online submissions, emails and letters. A summary of public input was released in January 2011 and is available to download.

Canadians expressed overwhelming support for the designation of Sable Island as a national park. Parks Canada also heard that Canadians:

• Feel it is important to maintain the ecological integrity and protect the cultural resources of Sable Island through careful management;
• Are interested in opportunities for visitor experiences on the island that ensure the protection of its unique sense of place and resources; and
• Are interested in opportunities to discover Sable Island through innovative outreach and education initiatives that bring the Sable Island experience to Canadians in their homes, communities and schools.

Formal consultations with the Mi’kmaq of Nova Scotia were also undertaken and are ongoing. 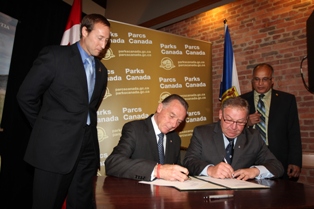 On October 17, 2011, the Government of Canada and the Government of Nova Scotia signed a Memorandum of Agreement to Establish a National Park at Sable Island. The agreement was signed by the Honourable Peter Kent, Canada’s Minister of the Environment and Minister responsible for Parks Canada, and the Honourable Darrel Dexter, Premier of Nova Scotia, and outlines the terms and conditions by which the national park reserve will be established and managed.