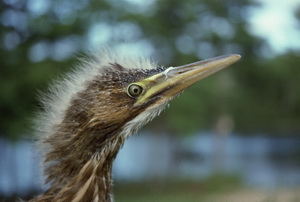 Approximately 178 bird species are found within Kejimkujik. These include the common loon, Barred owl, warblers, woodpeckers, as well as northerly and southerly species.

The common loon can be heard calling at night on many of our lakes. The nesting success of loons has been monitored for many years by the Canadian Wildlife Service and park staff. Visit our research section for more information about loons.
Find out about Keji’s LoonWatch program

This is Kejimkujik's most common owl and can frequently be heard calling in and around the Jeremys Bay campground. These owls nest successfully in many woodland habitats throughout the park.

Approximately 20 species of warblers occupy Kejimkujik's forests and raise their young there. Warblers help the forests by destroying vast numbers of insects. This generally occurs during the summer months, when the birds are most numerous. 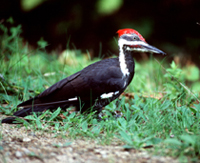 Six species of woodpecker have been known to occur in the park. The Pileated woodpecker is one of Kejimkujik’s most striking birds. Keji's mature hardwood forests and abundance of large trees is a good area for them. These habitats provide ample nesting sites and food sources for this uncommon woodpecker.

Scarlet tanager
© Parks Canada/J. Graham
Our southern species generally are found in the park’s hardwood forests. These species include the Scarlet tanager, Great crested flycatcher, which has been proven to breed, and the Wood thrush, which is recorded sporadically. All are rare birds in Nova Scotia.

Kejimkujik is home to several boreal bird species. Within the dense softwood forests of Kejimkujik, inquisitive species such as the Boreal chickadee, Red-breasted nuthatch, Spruce grouse and Gray jay may be found.

The Piping plover is a small, lightly coloured plover with a single dark neckband. It nests right on the sand and cobbles of the beach. It lays four eggs that blend in perfectly with the sand and seashells.

The Committee on the Status of Endangered Wildlife in Canada (COSEWIC) has declared the piping plover "endangered". It is therefore considered a "Species at Risk." Staff and volunteers perform nesting surveys and restoration of plover habitat.