The Southwest Nova Biosphere Reserve, which includes Kejimkujik, contains over three-quarters of Nova Scotia’s species listed under the federal Species at Risk Act and/or Committee on the Status of Endangered Wildlife in Canada (COSEWIC) and the provincial Nova Scotia Endangered Species Act. This makes this area one of Canada’s biodiversity hotspots with many species found nowhere else in Canada! A vast watershed of lakes, rivers, and wetlands contributes to this biological productivity.

Information on the recovery programs of some of these species can be found below.

You can help! Park staff, researchers and volunteers are involved with hands-on research and recovery efforts to help these species. Find out how you can get involved and make a difference. 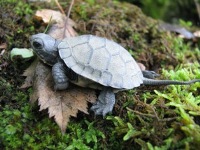 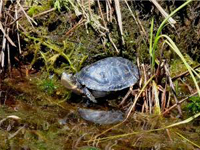 The Blanding’s turtle, Kejimkujik’s rarest turtle, is a medium sized turtle with a distinctive dome shaped shell covered with yellow flecks and a bright yellow chin and neck. There are currently four small recognized populations of Blanding’s turtles in Nova Scotia, including one in Kejimkujik.

Park staff, researchers and volunteers monitor nesting habitat and protect turtle nests with exclosures, watch the nests for emerging hatchings in the fall and radio-track and perform visual surveys throughout the summer. As part of the Headstart program that ended in 2012, over 100 captive reared turtles have been released back into Kejimkujik. 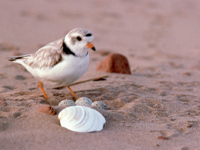 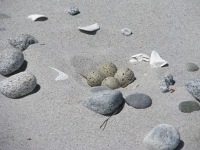 The piping plover is a small, lightly coloured shorebird with a single dark neckband. It lays four eggs directly on the sand in a small nest scrape that blends in perfectly with the sand and seashells.

The Piping Plover nests throughout Atlantic Canada, including Kejimkujik Seaside’s St. Catherines River Beach. This beach is closed from April to August to give plovers the space to raise their young. 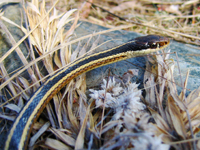 The Eastern Ribbonsnake is a slender, aquatic snake with three bright yellow stripes running from head to tail which contrasts against its jet-black body. It is one of five species of snake in Nova Scotia, none of which are venomous. In the mid-1990s, Grafton Lake was lowered by 2 metres when an old dam was removed. This newly created habitat appears to be a hot spot for ribbonsnake activity in Kejimkujik.

Staff, researchers and volunteers perform visual surveys for ribbonsnakes in the park in the spring, summer and fall. A project in partnership with Dalhousie University involves testing the ability of “sniffer dogs” or “conservation canines” to detect ribbonsnakes in wetland habitat where it is hard to visually spot them. These research projects will help improve the knowledge surrounding this elusive species. 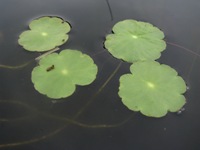 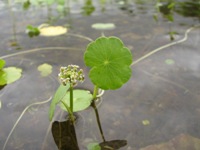 Water-pennywort and flower
These special species are part of a group of plants called Atlantic Coastal Plain Flora (ACPF), which are a unique group of unrelated plants that are found along the flat land of the Atlantic Coast from Florida to Nova Scotia. There are 90 species of ACPF in Nova Scotia. 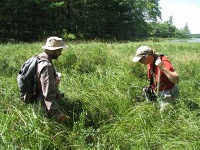 Shoreline surveys are also currently being conducted by expert botanists, researchers and volunteers around the entire perimeter of Kejimkujik Lake to inventory all the ACPF species along the shoreline. During these surveys in 2011, Long’s Bulrush was first discovered in the park. This globally rare species grows in circular colonies that can be 5-10 m wide and it can live to be 400 years old. 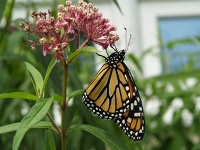 The Monarch Butterfly is bright orange with heavy black veins and white spots. It makes a long-distance migration to Mexico each year. Female Monarchs lay their eggs only on milkweed plants and the caterpillars eat only milkweed leaves before their transformation into chrysalis and finally into butterfly. In summer, the Kejimkujik Visitor Centre features a butterfly garden and a Monarch exhibit.

The "Butterfly Club" was created to encourage people to create chemical-free habitat for the Monarch Butterfly by planting swamp milkweed and native wildflowers on their properties and in their communities. Butterfly Club kits come complete with two swamp milkweed plants, tips on planting butterfly gardens, information on the Monarch Butterfly and more! Club kits can be purchased at the By the Mersey Gift Shop at the Kejimkujik Visitor Centre and at the Mersey Tobeatic Research Institute. 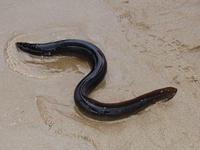 The American Eel is a fascinating species with a complex life history and migration. Young eels hatch from eggs in the Sargasso Sea and after a period of time enter freshwater lakes and streams where they will spend the remainder of their life until they are ready to return to the Sargasso Sea and spawn.

Kejimkujik is part of a multi-park project initiated to learn more about the American Eel. Using eel pots, staff and volunteers are surveying for eels in the park.