Step back in time...

Welcome to one of Canada’s most unique places – a park of great natural beauty that echoes with the footsteps of ancient history.

While Kejimkujik has been a popular national park for more than four decades, its importance to the Mi’kmaw people is based on millennia of ancestral history. For many centuries, this particular part of Nova Scotia where Kejimkujik now lies was a place of encampments, fish weirs, hunting territories, portages, trails, and burial grounds.

Kejimkujik is a national historic site and the land is the keeper of the stories and the memories of the Mi’kmaq of long ago. Here the rivers tell of the canoes that passed this way and many shoreline areas tell of the camps built for millennia by the early Mi’kmaw. Even the rocks along the lakeshores have stories upon them. 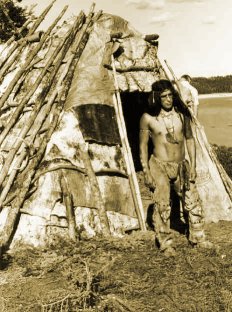 The earliest known traces of human occupancy in Atlantic Canada date back more than ten thousand years. Evidence of this is found in Debert, Nova Scotia. We refer to these people as ‘Palaeoindians,’ the Saqiwe’k L’nuk. They came into the Maritimes around the end of the last great ice age, following large game animals such as the caribou as they expanded into the land revealed by the retreating glaciers.

The earliest evidence of people in the Kejimkujik area dates to about 3000-4000 years ago. This time period is called the Late Archaic, the Mu Awsami Saqiwe’k. Exciting new discoveries along the Mersey River, south of Kejimkujik, indicate that earlier Archaic people used these waterways as much as 6000 years ago. Here they lived a semi-nomadic lifestyle, moving from place to place as they followed the cycle of the seasons in search of food and resources. Over the millennia they developed the distinctive culture, traditions, and language of today’s Mi’kmaq. 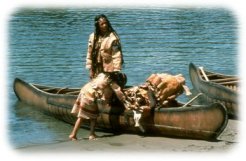 
With its abundance of caribou, moose, freshwater fish, and other staple foods, the Kejimkujik area made an ideal living site for part of the year. Other parts of the year were spent at the coasts gathering saltwater fish and shellfish. The Mi’kmaq used the complex system of rivers and lakes as they traveled between the south and north coasts, with Kejimkujik a regular stop at the center of the network. 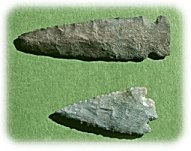 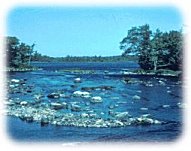 Because the Mi’kmaq lived in harmony with nature, they left very little imprint on the land. However, careful research has uncovered the remains of seasonal camps, burial grounds, fish weirs, portages, and trails, whose traces are still present throughout Kejimkujik. In all, over 60 sites have been identified in this area, dating between the Late Archaic and Colonial periods. Numerous artifacts have also been recovered from within the national park and national historic site. All of these provide vital clues to the nature of the cultural landscape of the area.

The most noticeable traces left by the early Mi’kmaq are the engravings they created in the glacially polished slate outcrops found at several locations around lakeshores. Referred to as ‘petroglyphs’  (carvings in stone), these images are an invaluable resource for understanding the history and lives of the Mi’kmaw ancestors. There are over 500 individual petroglyphs within Kejimkujik National Historic Site, making it one of the largest collection of such images in eastern North America. These petroglyphs are a unique and important component in the cultural landscape. 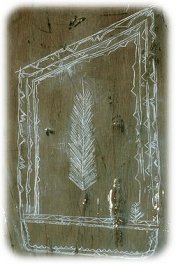 Perhaps some of the most important images portray men and women wearing the traditional clothing of the time. In some cases, these images show highly detailed double-curve designs decorating the clothing. Foremost among these images is the unique peaked hat traditionally worn by Mi’kmaw women. Over 60 petroglyphs depict these peaked hats, suggesting the importance of women in Mi’kmaw society. 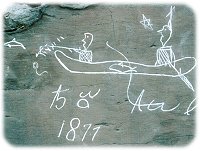 Several culturally unique images depict the distinctive Mi’kmaw ocean-going canoe. Built with raised sides, and sometimes rigged with a small sail, this type of canoe was designed for use at sea, and it is seen in several petroglyphs in pursuit of porpoises and other large mammals in the ocean. Another remarkable group of images bear the signatures of the artists written in Mi’kmaw script. While theirs was primarily an oral culture, Mi’kmaw Elders tell of a seldom used written language, and the Kejimkujik petroglyphs provide some of the only surviving examples.

A Time of Transition

Following contact with European fishermen, traders and settlers on the coast of Atlantic Canada in the 16th and 17th centuries, population numbers of Aboriginal peoples in the region seem to have declined. This happened to the Mi’kmaq as it happened elsewhere throughout the Americas. The primary cause was the previously unknown illnesses and diseases introduced by the Europeans.

Nonetheless, Kejimkujik remained an important location for the Mi’kmaq, despite the steadily increasing settlements of European colonists. In 1842, the Commissioner of Indian Affairs for Nova Scotia, Joseph Howe, granted twelve plots of farmland to Mi'kmaw families living on the shores of Kejimkujik Lake. The land was of poor quality and as sport guiding grew, it replaced farming as a livelihood for the Mi’kmaq.

In the late 19th and early 20th centuries, Kejimkujik became a renowned destination for sports fishers and hunters from Canada, the United States and Great Britain.

Eel weirs had been used on the Mersey River for perhaps thousands of years. They continued to serve their role of directing and allowing the harvest of eels. The weirs were used well into the 20th century, including use by non-Mi’kmaw commercial companies.

European settlement of the area began around the 1820s, and while a few farms were cleared, logging and gold mining also played an important role in the history of Kejimkujik. In the early 1900s, the area became a destination for sportsmen seeking hunting and fishing adventures. 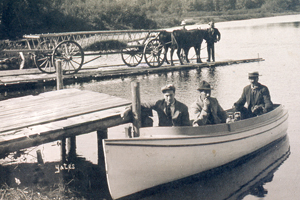 Though nearly half of the land in Kejimkujik was originally granted to farmers, very little cultivation was undertaken except for a few farms in the eastern part of the Park. These were all located on hills where the soils are best. 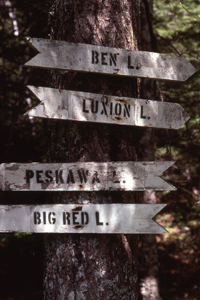 It is uncertain when logging began in the Keji area but almost all of the land has been cut over at some time. In the early days, most of the logs cut were driven down through the lakes and rivers, some as far as Liverpool. The remains of numerous sawmills testify to local operations in more recent times.

Three small gold mines existed within the Keji area. Although the workings in these mines yielded little ore to their owners, they did yield a variety of “tall tales” and they brought new attention to the area. The remains of pits, iron boilers, and cabins can still be found. You can visit one mine on the Gold Mines Trail, which features interpretive signs. 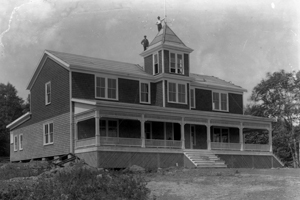 Early settlers’ accounts of the Kejimkujik area describe a desolate wilderness, where the thin soils, rocks, and bogs would support nothing useful. It was this wilderness that became a haven for those who sought fishing, hunting, or simply to get away. To provide accommodation for the sportsmen, lodges and cabins were built around Kejimkujik Lake. The best known, and most luxurious, was Kedge Lodge. Many local men were hired as guides for these visitors, and the history of guiding is a colourful chapter in the area’s history.

The human history of Kejimkujik Seaside spans as much as 5000 years. Only one object, a spear point, dating to the Late Archaic Period (5000 to 2500 years ago) has been found. It is believed that most of the prehistoric sites occupied by ancestors of the Mi’kmaq have been submerged by the rising waters of the Atlantic Ocean and are now fishing banks. In more recent times, the Mi’kmaq probably used the area of the Kejimkujik Seaside for short hunting and gathering excursions. Mi’kmaq communities were found in what is now Liverpool.

In the summer of 1604, Samuel de Champlain and Pierre Dugua, sieur de Mons camped at Port Mouton. In his map, Champlain describes the Port Mouton area as being: “Open country where grows only shrubs and heaths”. The expedition spent the next summer exploring and mapping the entire coastline. Major settlement efforts by the French were concentrated in the Liverpool area and at Cape Sable. The Seaside seems to have held little interest for the first Europeans. The earliest European settlement at the Seaside, including a free black Loyalist homestead, dates back to the late 18th century Loyalist period. This was in the form of isolated farms along the coast. 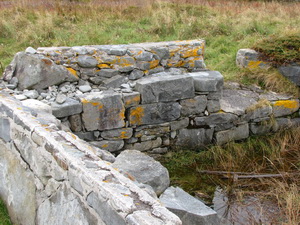 The greatest evidence of the Seaside’s human occupation is from the 19th and early 20th centuries. Several families attempted a mixture of fishing and farming in the area. Parts of the Harbour Rocks Trail follow the old St. Catherine’s River road, shown on maps as early as 1861. That road and other cart tracks connected the small farms along the coast. In a few locations you may discover old stone foundations of houses and farm buildings dating back over 100 years.

A large sheep farm, established by the Kinney family, consolidated many of the smaller farms in the early 20th century into the St. Catherines River Farm. It developed into quite an enterprise with many buildings and up to one thousand grazing sheep. Spruce-fir woodland islands were referred to as a “sheep shelter groves” on the map of the Kinney farm. At MacLeod’s Cove, you will see the foundation of the Cameron house where, around 1912, a Scottish herdsman came with his family to work on the Kinney farm. This farming activity created many enduring environmental changes, including draining saltmarsh portions of the lagoon and clearing land for better sheep pasture. Today, some of the barrens shrub habitat may be regrowth following the clearing.

Offshore you can see Little Hope Island with the remains of the lighthouse which was built there in 1865 and was staffed until 1950. This dangerous coast caused at least five major shipwrecks during the 1800s. Occasionally pottery washes up on the beach from an old shipwreck somewhere just offshore.

In 2004, Hurricane Juan landed on the south shore of Nova Scotia with pounding surf and tidal surges. Little Hope Island’s lighthouse was badly damaged; it toppled after another storm in December, ending 138 years of vigilance.

Living with the Atlantic 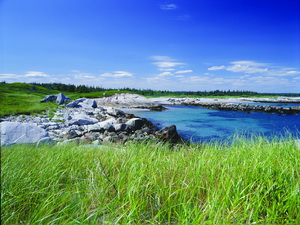 Rural and coastal communities, including Port Mouton and Port Joli, surround Kejimkujik Seaside. During the summer, visitors may see people engaged in a traditional harvest. Very near the shoreline, in small dories, they use large rakes to bring seaweed into their boats. During the lowest tides of the month, they will be harvesting Irish moss and the more common rockweed at other times. Caragheenan is extracted from these seaweeds and used as emulsifiers or thickening agents in the preparation of such products as toothpaste and chocolate milk. Liquid plant fertilizers are also produced.