Our moose population counts show that the moose population in the Cape Breton Highlands National Park has been at a high level since the late 1990s. The most recent survey conducted in March 2015 estimated the density of moose in the park to be four times the amount a healthy balanced forest can typically support. After more than 15 years of scientific study, we know that our boreal forest cannot sustain this population. 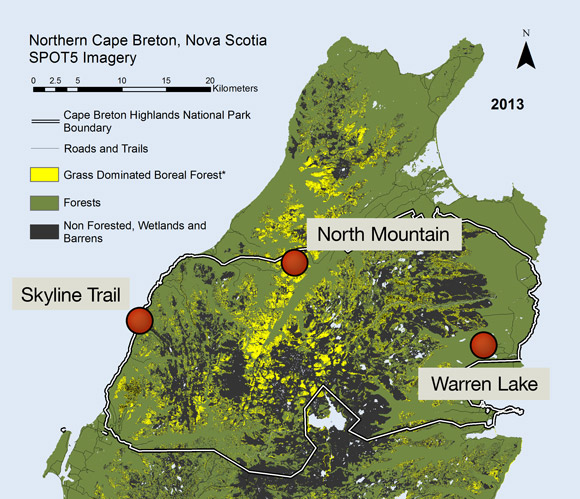 The Bring Back the Boreal pilot project aims to test a variety of restoration techniques throughout Cape Breton Highlands National Park:

In 2007, a small fenced-in area known as an exclosure was constructed to see if the forest would regenerate naturally if protected from moose browsing. We discovered that the thick layer of grass and harsh weather conditions prevent any new trees from growing.

In 2015, a larger exclosure, the size of nine football fields (5 hectares) was constructed.

To promote healthy regeneration and to create habitat for forest dependent species, over 57,000 trees have been planted in and around the exclosure.

Thousands of trees have been planted by professionals and volunteers, including school groups, families, university students and participants in the Nikani Awtiken youth camp over four years. Tree planting is now completed. A huge THANK YOU to over 2,700 volunteers who clocked an amazing 2,500 hours planting trees!

Visitors are able to witness our progress as they hike through the exclosure.

Check out the progress of this project on the Skyline trail by visiting the webcam installed on the viewing platform within the fenced-in moose exclosure. Watch the forest’s progress, and keep an eye out for wildlife!

Moose overbrowsing has severely impacted North Mountain, and more than half of the area is now covered in dense grass.

Like the Skyline trail, a small exclosure was constructed in 2007 to protect vegetation from moose. Since then, we have observed that the forest has been able to naturally regenerate inside the exclosure. This information suggests that if moose are excluded from North Mountain the forest will be able to regenerate on its own.

In the fall of 2015, Parks Canada and the Unama’ki Institute of Natural Resources began a four-year moose population reduction program in a 20km2 area of North Mountain. Two other reduction operations occurred in the fall of 2016 and 2017. A fourth is planned for fall 2018.

The area around Warren Lake is home to a mixed Acadian forest. While the main focus of the project is on the boreal forest, we know that moose are having impacts in other forest types as well. At Warren Lake, we hope to better understand these impacts on the Acadian forest.

A recent study in Cape Breton Highlands National Park shows that white pine and red oak are not regenerating well. Regeneration of both these species is encouraged by fire, so the poor regeneration may be due to lack of fire, heavy moose browsing, or a combination of these factors.

Following a public consultation process, a prescribed burn is planned for an area near the Warren Lake Trail as part of a larger fire project connecting national parks in Atlantic Canada. After the fire, two small exclosures will be built to help Parks Canada better understand the impacts of moose browsing on burned and unburned areas in a mixed forest.