A forest at risk

Satellite imagery of northern Cape Breton shows dramatic changes in the boreal forest of Cape Breton Highlands National Park. In the past, grass covered very small areas of the national park and was only found in wetland meadows and fens. 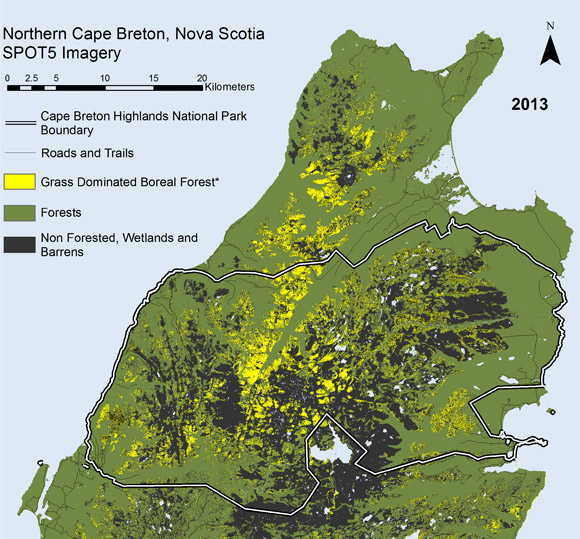 However, these grasslands have increased in size over the last 10 years. New grasslands now cover 11% of the national park and are growing, replacing a third of our boreal forest. These open grasslands are poor habitat for species that rely on boreal ecosystems, including federal and provincial Species at Risk like Bicknell's thrush, Canada lynx, and the American marten.

A healthy forest is always changing. Natural disturbances such as insect outbreaks and fire are normal processes in the boreal forest.

When older mature trees die, they open up the canopy and let in sunlight, allowing young trees to grow and seeds to sprout. This is how the forest replaces itself generation after generation.

Where did the trees go?

Spruce budworm infestations are part of the natural cycle of the boreal forest. An outbreak in the 1970s and 1980s, removed 90% of forest cover in some areas.

New growth of young trees and shrubs provided the perfect food for moose.
With no major natural predator or disease in Cape Breton, the population grew to more than four times the amount a healthy, balanced forest can typically support.
Since then, there has been little or no regeneration of the boreal forest.
Grasslands have taken over, changing the landscape of the park and putting species at risk.

In the 1920s, after years of over-hunting and habitat change, moose became extirpated or locally extinct from Cape Breton Island. In 1947-1948, 18 moose were brought from Elk Island National Park in Alberta and released in Cape Breton Highlands National Park with hopes of re-establishing a healthy population. Their population grew slowly as they gradually spread throughout northern Cape Breton.

Then, in the 1970s and 1980s, spruce budworm consumed large areas of mature boreal forest in Cape Breton Highlands National Park, removing 90% of the forest cover in some areas. This, in turn, created a flush of new growth of young trees and shrubs – perfect food for moose.

With lots of food and few predators, the moose population in northern Cape Breton grew rapidly. Since that time the state of the boreal forest has declined. Large areas that were once forest are unable to regenerate as moose have browsed any seedlings that grew over 30 cm high. These over-browsed and stunted trees have started to die and have now been replaced by a thick and persistent mat of grass and ferns.