Bring Back the Boreal newsletter - October 2016

Why is Bring Back the Boreal so important? 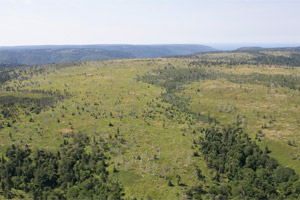 A thick mat of grass is replacing the once-thriving forest.

A healthy boreal forest is home to many plants and animals like moose, bears, snowshoe hare, birds, red squirrels, coyotes, lynx, and American marten. These animals all depend on the forest habitat to survive. A thick mat of grass is replacing the once thriving forest. Rare species such as the lynx and American marten are struggling, while forest birds like the Bicknell’s Thrush are being replaced by grassland species. The Bring Back the Boreal project is trying to restore the health of the forest by planting trees and preventing moose from overeating them, especially young trees that are trying to grow and provide food and shelter to animals who depend on that forest for survival. The four-year project is testing different techniques in the park to find the most effective approaches to restoring the forest. These include tree planting and fencing along a section of the Skyline trail to prevent moose from browsing (eating) young trees and the removal of moose from a 20 km2 area on North Mountain (2% of the park).

Since an overabundance of moose is contributing to over browsing and deterioration of the forest habitat, efforts must also focus on reducing the moose population to a sustainable level. It is estimated that the moose population within Cape Breton Highlands National Park (CBHNP) is four times the amount a healthy balanced forest can typically support. Moose population reduction is one strategy being explored to help restore the boreal forest. Last year, 37 moose were harvested from a 20 km2 area on North Mountain (2% of the park).

This year’s moose population reduction goals will again be achieved through a Mi’kmaq harvest within the same 20 km2 area on North Mountain. The harvest activities are tentatively planned to start as early as the first week of November and could last until December 18, once again in collaboration with the Unama’ki Institute of Natural Resources (UINR).

Although other options have been researched and considered, including relocation and predator introduction, the harvest was selected as the most appropriate method for reducing the moose population for this four-year project since it mirrors the introduction of a predator and is well suited to the realities of this small study area.

While the overall project has received a lot of support, there’s no question that the moose harvest component of the project has been met with some opposition. Some see hunting as contrary to Parks Canada’s mandate. Others see the park as a sanctuary for moose, while others want to be able to participate in the harvest.

Parks Canada’s mandate is to protect and conserve Canada’s natural and cultural heritage so that its sites are enjoyed for generations.

CBHNP was designated to protect and present the boreal forest in the area. A healthy boreal ecosystem provides habitat for all animals. Population reduction is not a new approach but is reserved for situations of absolute necessity. It has been successfully implemented in other national parks in Canada. Strengthening partnerships with Indigenous Peoples is a critical element of Parks Canada’s work and contributes to a whole-of-government approach to reconciliation with Indigenous Peoples. That is why Parks Canada and UINR are collaborating on this project since both share a common interest in restoring the health of the boreal forest for future generations.

A well-managed moose harvest is just one way that we are working to restore the boreal forest. Results from the harvests and tree planting will be compared year to year to see which method – or combination of methods – is most successful in restoring the health of the boreal forest.

During the moose population reduction activities, motorists may notice unusual activity on the top of North Mountain, near the harvest area. There will be some closures in effect to help ensure safety of travellers in the area as well as those involved in the harvest. Please note that the Cabot Trail will remain open to through traffic.