Bring Back the Boreal newsletter - August 2016 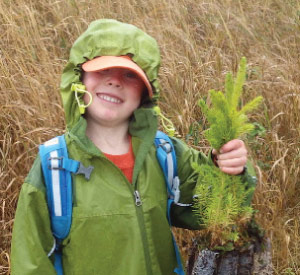 The health of the boreal forest in Cape Breton Highlands National Park (CBHNP) is in decline. Rare species such as the lynx and American marten are struggling with the loss of habitat, while forest birds are being replaced by grassland species. Parks Canada is working with the Unama’ki Institute of Natural Resources (UINR) and other partners to restore the forest’s health. In 2014, we began a four-year project focused on reversing the trend of forest loss and bringing back the boreal forest.

The Bring Back the Boreal conservation and restoration pilot project focuses on three areas: Skyline Trail, North Mountain and Warren Lake. In each of these areas, we are trying different restoration techniques to develop the most effective approaches, including tree planting, building fences to keep moose from browsing young trees, and reducing the number of moose in a specific 20km2 area of the park.

We are planting trees!

Tree planting plays a big role in the Bring Back the Boreal project as we test ways to restore the boreal forest in CBHNP. Planting inside the exclosure (fenced-in area) of the Skyline Trail protects the seedlings from browsing moose, and will help us determine which planting techniques work best. Our goal this year is to have 40,000 balsam fir seedlings planted in the exclosure. In June, we hosted Seedling Saturdays, which welcomed hikers along the Skyline trail to join in on the planting. We also had visits from eight school groups ranging in ages from 6 to 18. In just four weeks, volunteers planted almost 2,000 trees! Thank you – we loved having you!

In addition, professional tree planters planted 37,000 seedlings in the exclosure. We will closely monitor the growth and survival of these trees over time to see which planting methods are the best in dense grass and harsh environments along the Skyline trail. If you would like to plant trees with us, join us in September for more Seedling Saturdays from 10 a.m. – 2 p.m. on the Skyline trail. If you’re interested in bringing your school group or community group for tree planting, please contact Nadine at nadine.lefort.pc.gc.ca or call 902-224-4237.

...that the balsam fir seedlings planted on the Skyline are from seeds collected from the Cape Breton Highlands back in the 1980s? Balsam fir seeds were saved at the National Tree Seed Centre in Fredericton, NB and sent to the Strathlorne Nursery, NS to grow seedlings that we planted on the Skyline. The forest is being regenerated with native seeds collected over 30 years ago! 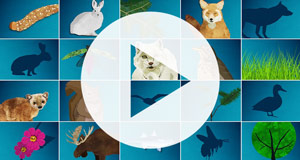 "Bring Back the Boreal: A story about Cape Breton Highlands National Park"

Cape Breton Highlands National Park has partnered with Canadian clothing company, tentree, on Bring Back the Boreal tree planting, project education and awareness initiatives. For every product they sell, tentree plants 10 trees internationally,
and customers that purchase their products can look up online where their 10 trees have been planted. To date, tentree has planted over 8 million trees around the world, which now includes our own Skyline trail. 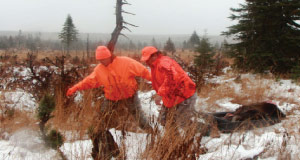 There are too many moose in the Cape Breton Highlands National Park (CBHNP) and they’re eating trees, which is what is causing the decline in the health of the ecosystem. Since there are no significant predators, there is an unusually high population of moose that has prevented normal forest regeneration since the 1980s. The forest is turning into grassland.

One of the techniques being tested to restore the forest is the lethal removal of moose from a 20 km2 area on North Mountain (2% of the park). This technique will reduce moose over-browsing and allow natural regeneration of the forest to occur. Any human intervention, such as reducing the population of a species, is only taken when absolutely necessary. This approach was chosen as the most feasible method to reduce the moose population in the study area for the Bring Back the Boreal project.

Last year, Parks Canada and the Unama’ki Institute of Natural Resources (UINR) partnered for the first-ever removal of moose in CBHNP. Planning is underway for this year’s North Mountain operation, which will take place this fall.

Both Parks Canada and the Mi’kmaq share a common interest in restoring the health of the boreal forest for future generations, and UINR has agreed to coordinate the activities of Mi’kmaq harvesters who participate in this year’s project.

In the meantime, we continue to monitor forest life, both on North Mountain and on nearby French Mountain, where no moose are being removed. Comparing results between the two areas will help us better understand the changes in forest ecology due to reduced moose browsing as a result of the removal of moose on North Mountain.