Bring Back the Boreal newsletter - April 2016

Life in the Boreal Forest 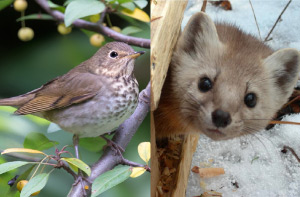 The health of the boreal forest in Cape Breton Highlands National Park is in decline. Forest species such as the lynx and American marten are struggling with the loss of habitat, while forest-dependent birds are being replaced by grassland species. Parks Canada is working with the Unama’ki Institute of Natural Resources (UINR), other partners and neighbouring communities to help restore the health of this important ecosystem so that we don’t lose our boreal forest to grassland.

A pilot restoration project called “Bring Back the Boreal” is focussed on two areas: Skyline trail and North Mountain. Parks Canada is testing different techniques in each area, to find the most effective approaches to restoring the forest. These include tree planting and fencing along a section of the Skyline trail to prevent moose from browsing (eating) young trees, and removal of moose from a 20 km2 area on North Mountain.

Parks Canada is starting the third year of this pilot project. A prescribed fire planned near Warren Lake, part of a separate restoration project, will help us learn more about the impacts of moose in another key region of Cape Breton Highlands National Park, the Acadian forest.

Hike a trail. Plant a tree. Save a forest. 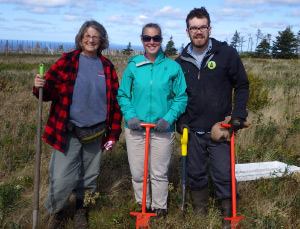 Last fall, visitors to Cape Breton Highlands National Park (CBHNP) witnessed the progress of Bring Back the Boreal as they hiked through the fence along the Skyline trail, built to protect seedlings from moose browsing. The area has turned to grassland and is unable to regenerate on its own, so Parks Canada is planting trees in the area. Moose like balsam fir but are not big fans of spruce, so balsam fir will be planted inside the fence and spruce trees outside.

In early fall 2015, Parks Canada hosted “Seedling Saturdays” and “Hike a trail, Plant a tree, Save a forest” events to give visitors and school groups an opportunity to help the forest by planting trees. Over 500 volunteers helped plant 5,100 Highland White Spruce seedlings outside the fence on the Skyline trail.

This year, visitors and local residents are once again invited to give nature a helping hand by planting a tree and walking the Skyline trail to experience how the trees grow, based on different planting methods.

Check out the next issue of this newsletter for more information about the tree planting opportunities coming up this spring. If you are interested in planting a tree to help save a forest in CBHNP, please contact us at 902-224-2306 or cbhnp.info.pc.gc.ca to learn more.

Bring Back the Boreal: A story about Cape Breton Highlands National Park is available at www.pc.gc.ca/bringbacktheboreal. This animated video tells the story of the boreal forest.

Land & Sea’s “A Tale of Two Moose” and “Moose Cull” provide insight into moose populations in Nova Scotia, particularly in Cape Breton Highlands National Park. You can watch these videos at: www.cbc.ca/landandsea.

If you’re interested in learning more about Mi’kmaq treaty rights, the documentary called aptn Investigates: With Rights is also available at http://aptn.ca.

For more information about the Bring Back the Boreal project visit www.pc.gc.ca/bringbacktheboreal.

Regular monitoring of the ecosystems of Cape Breton Highlands National Park is showing that after 30 years of intensive moose browsing (eating of young trees), large areas of the 1970s budworm-killed forest have not been able to regenerate on their own and are now converting to grassland. As a result, forest species such as the Lynx and American marten are struggling with the loss of habitat, while at-risk forest-dependent birds like the Bicknell’s thrush are being replaced by grassland species. These factors are causing an overall decline in the health of the Boreal forest in the Cape Breton Highlands National Park.

So how do you prevent moose from eating young trees? There’s no easy answer.

In 2007, Parks Canada built a closed-in fence (known as an exclosure) on North Mountain to see if the forest would regenerate if it was protected from moose browsing. Although it’s only been eight years since the exclosure was built, the forest is regenerating well. The contrast between the forest outside and inside the fenced-in area is very apparent and is further evidence that moose browsing is preventing the forest from regenerating on its own.

That’s why, in 2015, Parks Canada built a second, much larger exclosure on the Skyline trail as part of the Bring Back the Boreal pilot project, to test a variety of tree planting techniques. This area will be closely monitored to provide insight that could be used for similar areas elsewhere in the park.

On North Mountain, where we know there is good, natural regeneration potential, we will be studying forest growth after the removal of moose from a 20 km2 area (2% of the park). This will help determine if a lower population of moose will allow the forest to naturally regenerate.

Reducing the Number of Moose 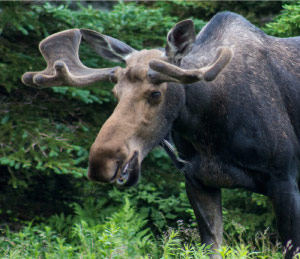 The current moose population trend in Cape Breton Highlands National Park (CBHNP) is unsustainable and is negatively impacting the forest ecosystem. It’s clear that the moose population in CBHNP has been at a high level since the late 1990s. A moose population survey conducted in March 2015 estimated the density of moose in CBHNP to be four times the amount a healthy balanced forest can typically support. After more than 15 years of scientific study, we know that our boreal forest cannot sustain this population.

One of the techniques being tested to find the most effective approach to restoring the forest is to build exclosures; fenced-in areas that prevent moose from browsing young trees.

A second restoration technique being tested is the removal of moose from an area on North Mountain to reduce over browsing and allow natural regeneration to occur. It’s important to note that reducing the population of a species is not a new approach, and is reserved for situations of absolute necessity. It has been successfully implemented in other national parks in Canada.

In December 2015, a moose population reduction trial was held within a 20 km2 area of North Mountain. Parks Canada partnered with the Mi’kmaq of Nova Scotia through the Unama’ki Institute of Natural Resources to conduct this moose harvest, as both share a common interest in restoring the health of the boreal forest for future generations. Consistent with Mi’kmaq treaty rights to hunt, fish, Parks Canada has an agreement with the Mi’kmaq that provides first opportunity to the Mi’kmaq of Nova Scotia to remove overabundant wildlife in national parks in the province.

This Mi’kmaq-led harvest resulted in the removal of 37 moose over a two-week period. The harvest was performed in a humane and respectful manner, and all moose were removed by harvesters and distributed to Mi’kmaq and other Nova Scotia communities as food and materials for traditional crafts such as drums. Aerial surveys of the area four days later showed the core area was depleted but the fringes and surrounding areas still had lots of moose.

Following moose population reduction measures, we will continue to monitor the moose population as well as other species in the park in these areas to confirm an improvement in the health of the boreal forest.

We will also be monitoring the forest on nearby French Mountain, where no moose will be removed. Comparing results between the harvested North Mountain study area and the French Mountain control area will help inform Parks Canada’s on-going efforts to restore the health of the boreal forest.