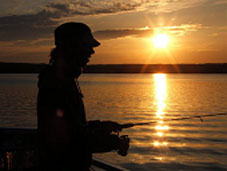 Admire some spectacular scenery as you fish.

Cape Breton Highlands National Park offers recreational fishing opportunities, in season, on its many lakes and streams. The most sought after species is the native brook or speckled trout. Atlantic salmon are also found in some park waters. Generally, the seasons run from April 14 through September 30, with catch and release during the month of September. Some of the waters within the park like the Clyburn Brook, the Chéticamp River and the Aspy River are scheduled for fly fishing only. Catch and possession limits are 5 for trout and 0 for salmon.

The park is required under national guiding principles and operating policies to ensure the highest degree of ecological integrity. Angling is permitted only under strict guidelines to ensure self-sustaining populations.

Before fishing in the national park, anglers should call ahead and confirm season dates and catch limits. There is a permit and licence fee applied, along with equipment restrictions. Regulations differ in most cases from those for fishing in provincial waters outside the park. Visitors can get updated information from Parks Canada at the warden office by calling 902-285-2582.

When angling in Cape Breton Highlands National Park, it is unlawful to: 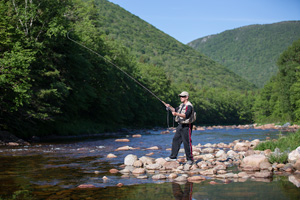 Enjoy a peaceful evening fishing along the rivers and streams of Cape Breton Highlands National Park.
© M. Soucy
Angling means fishing with a hook and line held in the hand or with a hook, line and rod held in the hand but does not include fishing with a set line.
Artificial fly means a single hook on a common shank, dressed with silk, tinsel, wool, fur, feathers or other material, or any combination thereof, without a spinning device whether attached to the hook or line.
Chemical attractant means a chemical or scented substance that is used to attract fish
Foul hooking means fishing with a hook or hooks attached to a line manipulated in such a manner as to pierce a fish in any part of its body other than its mouth.


Parks Canada wardens will be monitoring fishing activities throughout the season. Creel surveys will also be conducted.

National park boundaries extend to the mean high water mark where they follow the sea coast and include any tidal waters within water bodies that flow into the sea.

General fishing permit:
$9.80 (Daily)
$34.30 (Seasonal)
Children under 16 years of age do not require a General Fishing Permit if they are accompanied by a person 16 years of age or older who is in possession of a valid permit and the child’s catch is included with that of the permit holder.

Salmon angling permit:
$34.30 (Seasonal)
Persons solely angling for salmon require only a National Parks Salmon Angling Permit but must release all other fish caught unless they also have a General Fishing Permit.
Children under 16 years of age do not require a Salmon Angling Permit if they are accompanied by a person 16 years of age or older who is in possession of a valid permit and the child's catch and release limit is included with that of the permit holder.

Fishing permits can be purchased in advance at the following participating locations:

This is not a complete listing of the National Parks Fishing Regulations and has no legal status. More information is available from:

All portions (including tributaries) of Clyburn Brook and North Aspy River within the park are CLOSED TO ALL ANGLING after August 31.

September 1 - 30: Angling restricted to catch and release only for speckled trout. The use of bait is also prohibited during this time.

Angling in all waters of Cape Breton Highlands National Park will be with barbless or pinched barb, single hook only.

NOTE: Any fish that is not being retained must be immediately returned back into the water from which it came in a manner that causes the least harm to the fish.

Atlantic salmon angling is permitted on the scheduled waters of the Chéticamp River and its tributaries.

That part of the Chéticamp River known as "The Barrel" is closed to all angling.

Angling for Atlantic salmon on the Clyburn Brook and the North Aspy River located within the park (and their tributaries) is prohibited due to low salmon populations.

Angling for Atlantic salmon is only by fly-fishing with artificial fly only. Catch and release only. Barbless or pinched barb single hooks only.

Introductions of non-native species threaten aquatic plant and animal species, including native fish populations, and are a major concern to Parks Canada. Organisms such as Spinycheek crayfish (Orconectes limosus) are most likely spread by humans moving items such as dip nets between bodies of water.