There are more good scrambling peaks in the Mountain National Parks than you can shake a ski pole at. They range from easily-accessed walk-ups with little exposure to steeper climbs with sections of serious exposure and/or loose, crumbly rock. Some of the most popular scrambles such as Mounts Rundle and Cascade, both of which overlook the Banff town site, have well-established, relatively straightforward routes that are described on brochures available at the Banff Visitor Information Centres. Closer to Lake Louise, experienced scramblers can ascend Mount Temple, one of the Canadian Rockies’ 54 peaks above 3353 metres (11,000 feet), via its standard route by mid-summer. 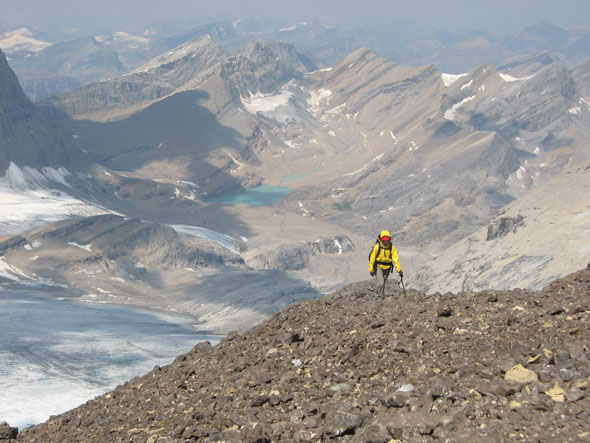 Many peaks in the Mountain National Parks can be climbed via non-technical scrambling routes.

The Canadian Rockies are made up almost entirely of sedimentary rock including limestones and dolomites, shales and silicas (including quartzite). The characteristics vary widely from the very worst (we’re not joking) to some fine rock, depending on the formations (the layers) encountered. The best rock climbing is found on the some of the thickly bedded limestones and dolomites, and the beautiful quartzites located along the main continental divide ranges, such as those in the Selkirk Mountains of Rogers Pass in Glacier National Park).

In the Selkirks, the deep winter snowpack usually lingers until June, and by late September, snow is likely to be found on the high peaks again. In the Rockies, the peaks of Waterton Lakes National Park could be dry by late May, while further north in Banff National Park, scrambling season usually begins in early June as the lower peaks of the eastern region of the park dry off, however, snow on approach trails and in some of the gullies can remain until later in the month. The higher alpine peaks of 2750 metres (9000 feet) and higher only begin to come into reasonable summer condition in late June and early July as the spring avalanches taper off.