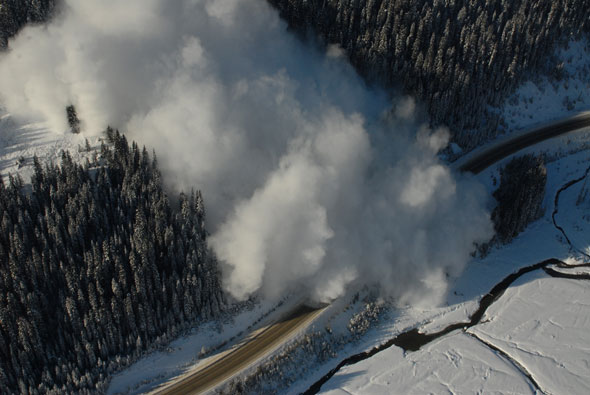 In effort to maintain a high level of public safety, Parks Canada relies predominately on avalanche warnings, temporary closures and explosives to stabilize avalanche slopes. Parks Canada’s Avalanche Forecasters study the snowpack and make decisions about when to control snow slopes that threaten any roads. Once the decision is made to control the slopes, the road is temporarily closed. Explosives are then detonated to break up the snowpack and bring the avalanches down to eliminate any hazard to the public. The roads are then cleared as quickly as possible so that motorists may continue on their travels.

Bring in the Troops

In Glacier National Park, where approximately 3000 motorists pass through daily during the winter months, Parks Canada operates the largest mobile avalanche control program in the world. The Rogers Pass section of road has the highest avalanche rating of any highway in North America. Due to the extensive scale of highway avalanche control work carried out in the park, where up to 15 metres of snow falls each winter, and 130 avalanche paths intersect the highway corridor, Department of National Defence employees are stationed in Rogers Pass throughout the winter season. These employees are professional soldiers trained to operate 105-millimetre howitzers for this purpose.

Under the direction of Parks Canada’s Avalanche Forecasters, the Army bombards known trigger zones high up the avalanche paths. The shock waves from exploding shells fired by the artillery will trigger avalanches when snow conditions are right. With the highway closed, the avalanches can thunder harmlessly down the slopes. The Highway Avalanche Control Program also employs road crews, including snowplow drivers and traffic control workers, who are local residents of Golden and Revelstoke, B.C. to keep the road clear.

In addition to active artillery control measures, seven permanent concrete avalanche sheds protect motorists travelling on the stretch of the Trans Canada Highway that passes through Rogers Pass. Two railway tunnels, completed in 1914 and 1988, permit the Canadian Pacific Railway to avoid the most active avalanche areas in Rogers Pass. Throughout the winter months, large areas of Glacier National Park are closed to skiers and boarders as avalanche control exercises using explosives are carried. Please check with the Rogers Pass Discovery Centre for information about current closures before starting out on your backcountry tour.