On August 7th, 2015, a group of two set out to attempt a new route on the North Face of Chancellor Peak in Yoho National Park. After climbing a considerable distance they encountered poor conditions and decided to traverse to the NW Ridge to complete their ascent. As the lead climber was gaining the ridge he had a climbing hold break and fell 10-15m, sustaining injuries to his knee and a large laceration on his leg. The group was able to move over to a small ledge where they used their first aid skills to close the wound and stop the bleeding, however they realized that they would not be able to continue climbing and used their cell phone to call for a rescue.

At 20:37 Banff Dispatch received the cell phone call. After confirming the location of the climbers and determining that there was enough daylight left to attempt to reach them, two Visitor Safety staff flew out to the accident location with Alpine Helicopters. The two climbers were soon located on a small ledge at approximately 2900m, and a staging area was set up at the Chancellor-Vaux col at 2580m. Using a line below the helicopter, a Visitor Safety person was slung into the ledge next to the climbers. The two climbers were then slung out to the Chancellor-Vaux col, loaded into the helicopter and flown to Lake Louise just before dark. The climbers were able to drive themselves to the hospital in Golden, BC to seek medical attention for the injured leg. 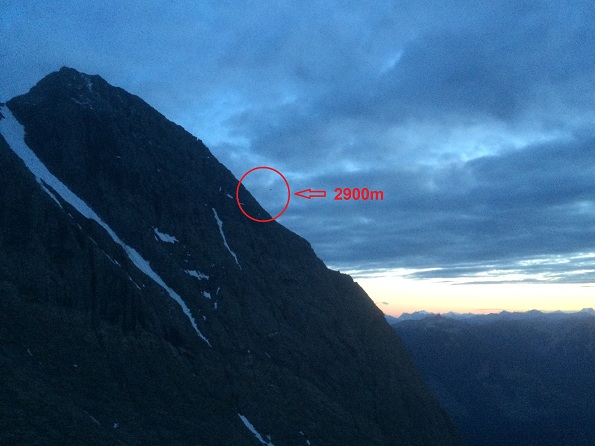 Helicopter approaching the location of the climbing accident on Chancellor Peak. Photo taken from the staging area at the Chancellor-Vaux Col, 2015-08-07

Analysis
This accident took place at high elevation in steep terrain near the end of the day. The fact that the injuries were relatively minor and that the climbers were able to be rescued that night is largely a result of the preparedness and prompt actions of the climbing team. The following are key points to take away from this accident.

The reporting person had a cell phone with good service, and was able to call Banff Dispatch directly with a very good description of their location and injuries. This good two-way communication also provided an opportunity to coach the climbers on getting organized for the rescue. Both of these things allowed the Visitor Safety team to complete the mission before dark.

During the fall, the climber was flipped upside down and fell head first before he was stopped by the rope. Fortunately he was wearing a helmet. He stated that his helmet took several major impacts, but he did not sustain any head injuries. This speaks to the fact that helmets can be useful in both protecting someone from falling rock and ice, as well as providing protection during a fall.

The team had substantial knowledge of first aid and were able to assess and care for the injuries prior to the arrival of the Visitor Safety team. They were also able to move to a safer location and wait for help. Being bandaged up and on a small ledge allowed for a very efficient rescue instead of a more involved technical rescue off a steep rock face.

Finally the team had enough gear to spend the night had this been required. This helped them stay warm while they waited for the arrival of the Visitor Safety team, and provided them with a good option had there not been enough daylight to complete the rescue.