On April 4th, 2015, a group of backcountry skiers set out to ski the Dolomite Circuit in Banff National Park. They reached Watermelon Pass in poor visibility conditions by mid-afternoon and began their ski descent to Mosquito Creek. Shortly after beginning their descent, one of the skiers fell and broke his leg. The group was well prepared and after assessing the injury and splinting the injured leg, they triggered the “Help” button on their Personal Locator Beacon (PLB) device to call for a rescue. The skiers also assembled an emergency toboggan using a nylon tarp and other materials that they carried for this purpose. After packaging the patient to help keep him warm, they began moving him down the valley in the improvised toboggan. A second group of skiers in the area arrived and offered assistance to the first group. One of these skiers continued down the valley to make contact with the rescue team, while the others stayed to help move the patient.

At 16:24 Banff Dispatch received a call via the PLB Emergency Centre who provided the location of the PLB that had been activated. A team of Visitor Safety staff was organized and flew to the accident site onboard Alpine Helicopters. At 17:05 an updated PLB position was sent to the rescue team showing that the injured person was getting closer to treeline. At 17:38 the skier who reached the highway was able to make contact with Banff dispatch via cell phone. She was able to provide details about the injury and relay information about what the group was doing to move the patient.

The rescue team arrived at treeline above Mosquito Creek at 17:45 but was not able to fly any higher due to the presence of thick cloud layers. They dropped off a Visitor Safety member at treeline just as the skiers towing the injured person arrived below the cloud layer. The injured person was moved to a good helicopter landing site, loaded into the helicopter and flown to an ambulance waiting on the highway near Mosquito Creek. 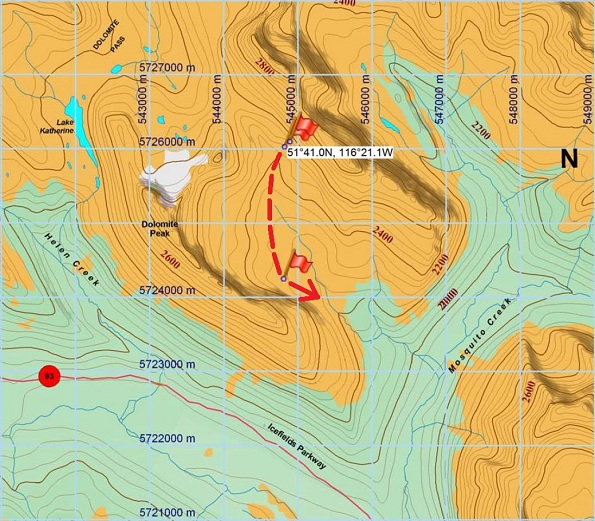 Location of accident site and movement of the injured patient to a helicopter landing site, Dolomite Pass Circuit 2015-04-04

Analysis
The preparedness of the ski group made the difference between the injured skier reaching the hospital that evening, and spending the night out in the mountains with a broken leg. The weather conditions that afternoon prevented rescuers from flying to the accident site, and there was not enough time for a rescue team to ski up to the patient and bring him out before dark. This would have resulted in either a long and difficult toboggan ride to the road, or an overnight camp with a helicopter flight out in the morning.
The following were all essential in getting the patient to a hospital for treatment that evening and improving the outcome of his leg injuries:

Once again, good work to this well prepared group of skiers for helping evacuate their injured friend and turning an unfortunate accident into a successful rescue which maximized his chances for recovery.