On September 6th 2014, two climbers left the parking area at 0730 to climb the Chase/Rowlands Chimney Route (5.7+, 460m) on Ashlar’s Ridge in the Miette Area of Jasper National Park. They began climbing at 0900 and found the route finding difficult. They got off route a number of times and used up valuable time back tracking, down climbing and getting back on route. The weather was warm (15 degrees with mixed sun and cloud). At 21:40, the report came in to Jasper Visitor Safety from a third party that their friends had texted her that they were stuck on the 9th (of 11) pitch of the chimney route and that it was too dark to negotiate the crux chimney pitch (50m 5.7+).

Visitor Safety specialists were able to contact the party via text and confirm that there were no injuries and that they had extra clothes and could spend the night on the ledge. The climbers had one rope (60ms) and were not confident that they could rappel the route safely as many of the pitches were more than 50ms. The climbers were instructed to stay put and not attempt to climb out in the dark. They would be contacted at first light and would reassess their situation at that time. After a long night, the rescue leader contacted the team at 0630 and they requested assistance for rescue. A Bell 407 helicopter and rescue pilot from Yellowhead Helicopters was brought in to initiate a heli-sling rescue operation. The steepness of the rock above the climbers required a 200 ft sling line from the helicopter to allow sufficient rotor clearance. 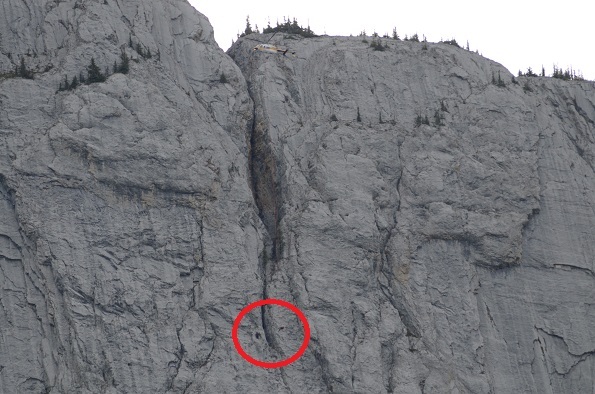 With limited space at the belay stance a single Parks Canada rescue technician was slung in to evacuate the climbers.

Analysis
Many of the big routes in Jasper are what can be described as ‘adventure’ mountaineering. They are often not bolt protected, nor do they have bolted belay stations. They often require a strong skill set in building anchors with natural protection, assessing fixed pitons, rock quality and backing up those for strong safe anchors. There are often long run-outs with little protection and involved climbing through sections of loose and questionable quality rock characteristic of the Rockies. Retreat from these routes will require a well thought out plan and often, knowing how to place strong pitons or having the expectation to leave gear behind. By getting off route, they lost valuable time and made the right decision to not try to continue climbing in the dark.

Cell coverage is spotty in most wilderness areas of Jasper National Park and they were lucky to have a signal in order to get a call for help out. Personal Locator Beacons (eg. InReach or Spot) tend to be a more reliable means of communicating for help in the Jasper back-country and being prepared to spend the night out is also a necessary part of any trip plan.