At 17:30 Banff Dispatch received a call from a climber stating that his partner had just fallen off the North Face of Mt. Temple. She was hiking up along the ridge, returning to the summit, when some scree collapsed under her feet causing her to fall onto the steep ice face of the North glacier. She tried to stop herself by digging her fingers into the ice but was unable to. Fortunately she summersaulted over the bergschrund and came to a stop on the glacier plateau, just below the bergschrund on the West end of the North Glacier. Although she had fallen approximately 80m, she had no life threatening injuries but could no longer use her hands. She also had the rope in her pack so her partner was unable to access her. The uninjured climber eventually made contact with the injured climber and determined that she was OK but unable to get herself out of there. 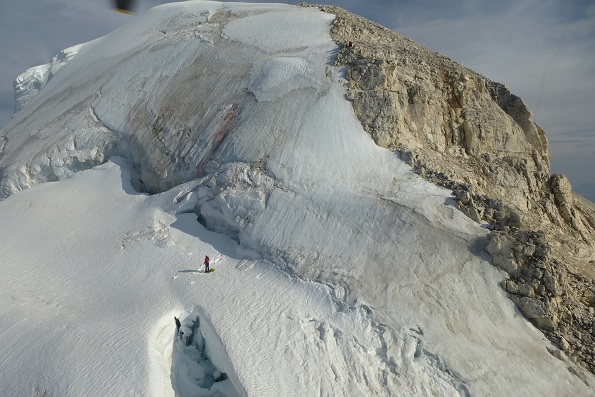 The site where the injured climber came to a stop on the north glacier of temple. 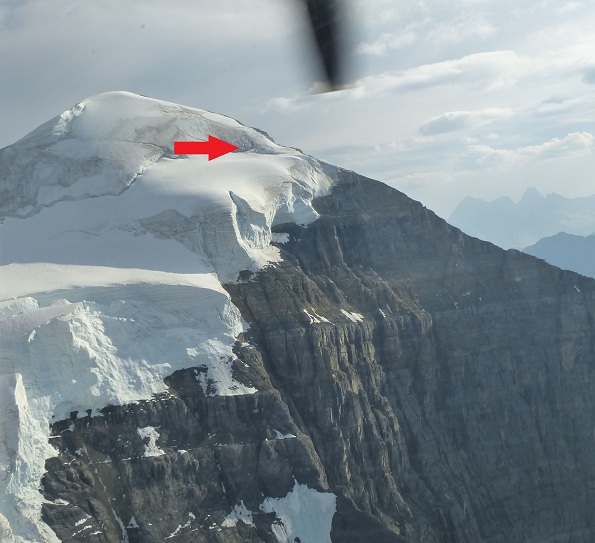 The arrow shows the location of the rescue

Analysis
The climbers had just completed climbing the technical East Ridge of Mt. Temple. After a rest at the summit, they started down the wrong ridge, but quickly realized their mistake and turned around to hike back up when the accident occurred.

This accident shows that accidents can happen when you least expect them, even to experienced and well prepared parties. The biggest error the climbing team made was to start down the wrong ridge. They had un-roped on the summit and started down what appeared to be a benign scree ridge. Although the ridge seemed benign, much of the scree and talus was sitting on old glacier ice. This has occurred in many areas of the Parks as the glaciers recede and can be tricky to negotiate. The collapse of her footing caused her to fall onto the icy face of the North glacier.

The uninjured partner made a good decision in realizing that he wouldn’t be able to help her without making the situation more dangerous, given the equipment he had. Additionally, he had a two way communication device with him and was able to contact Banff Dispatch and request help. He had direct communication with Visitor Safety staff and gave them good information about the location, the situation, the injuries, current weather conditions, and what resources would be required to perform the rescue. This information is invaluable to VS staff in a rescue operation, and allowed for an efficient rescue of the injured climber.

On August 14th, 2014, two climbers set out from Lake O’Hara Lodge to climb the Grassi Ridge route on Wiwaxy Peak. Late in the afternoon light rain began falling which made the quartzite very slippery and slowed their progress. As they were approaching the final pitch the leader passed a small pillar which collapsed and several large blocks fell down the climb. The belayer was hit hard on the thigh sustaining injuries that prevented him from moving, and their ropes were badly damaged by the rock fall. The leader was able to rappel back down on the better of the two ropes, attend to the belayer and call for help using a SPOT Satellite Communicator as well as radio down to friends at the Lake O’Hara Lodge.

At 2040 hours Visitor Safety received a call via the Lake O’Hara Lodge staff about the injured party and also received a “911” message via their SPOT Satellite Communicator. Due to the poor weather and the limited daylight the Visitor Safety team was unable reach the injured climbers that evening. After communicating with the climbers via the Lake O’Hara lodge staff and looking at the weather forecast, it was decided that a rescue attempt would be made at first light rather than attempt to climb up the wet rock and reach them during the night. The climbers were able to find some shelter under a boulder and wait.
. 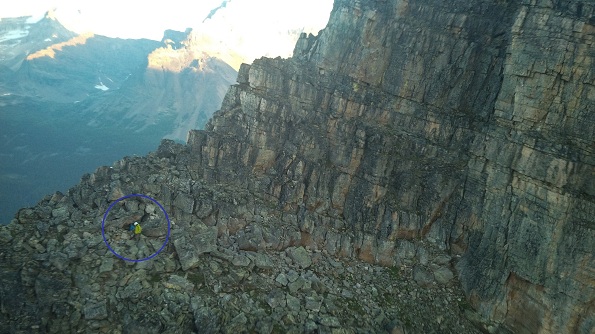 After a brief delay due to fog, the Visitor Safety team was able to fly into Lake O’Hara at 0700 hours on August 15th and reach the climbers. The two climbers were slung out by helicopter to a waiting ambulance where they were treated for mild hypothermia and the injury to the thigh..

Analysis
Falling rock is always a concern on longer rock and alpine routes. When combined with the wet and slippery quartzite it can be quite difficult to manage. Whenever possible try to place protection to keep the rope from knocking off loose rock, and seek out sheltered belays to minimize the chances of injury.

Having some spare clothing (gloves, hat and a jacket) and a light emergency tarp can make a significant difference in a situation like this. This party did have spare jackets and they were fortunate to find a sheltered spot nearby. The rain eventually stopped and the night time temperatures remained warm, but having a couple extra lightweight layers and a light tarp would have made things a lot more comfortable.

Having a good means of communication with the injured party was a real bonus. It allowed for an accurate location, a good assessment of their condition, the ability to let them know when to expect a rescue and to monitor their condition through the night.

Finally this case highlights the fact that a rescue can be significantly delayed due to time of day, weather or route conditions. After communicating with the climbing party it was determined that the party was going to be able to make it through the night without additional help, and the risk to rescuers would be significantly reduced by waiting until first light to reach them.


Two climbers were climbing the route "Fiddler on the Roof" at the Back of the Lake. This bolted climb traverses over a roof giving the climb an airy feel. The leader had topped out and was ‘cleaning’ the quickdraws while on rappel. Because of the traversing nature of the route, in order to get to the lower draws, the belayer was giving the leader a ‘fireman’s’ belay by holding both rappel ropes so that the leader could pull himself into the lower quickdraws and go hands free to clean the quickdraws. The belayer was lighter than the leader and was on uneven ground and was pulled off her stance. She was thrown downhill over rough terrain and caught her foot on a root on the way down. She was wearing sandals and the force of the pull broke her ankle and gave her a big gash on the bottom of her foot. The climbers started self-evacuating before realizing that they would need help and called Banff Dispatch.

Dispatch received the call around 22:15 and co-ordinated a rescue involving Visitor Safety staff with the help of the Lake Louise Volunteer Fire Department. The rescuers met the injured party partway along the lakeshore trail. The patient was assessed, the fracture was realigned and splinted and then transported by wheeled stretcher to the ambulance waiting at the parking lot. 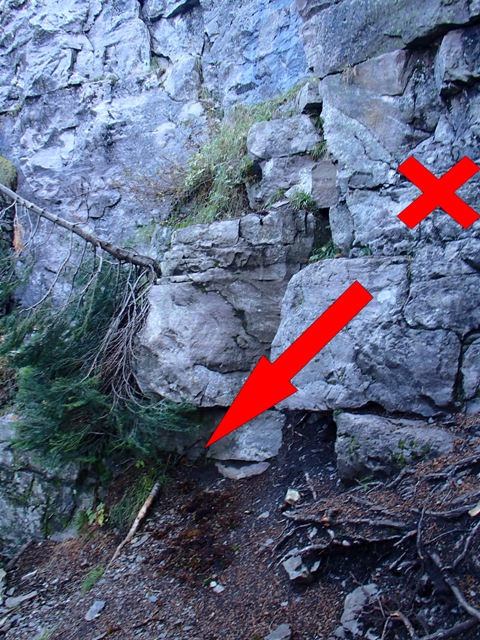 The accident scene at the base of the climb "Fiddler on the Roof". The "X" shows roughly where the injured climber was thrown from and the arrow indicates where she landed.

Analysis
It is very common for a leader to ‘clean’ a single-pitch climbing route while being lowered or on rappel. This is done so that all of the climber’s gear (quickdraws for a sport route) can be removed without the second climber having to top-rope the route. This may be done for a variety of reasons – convenience and speed being the most common. In this case, the climbers had decided to do one last climb before nightfall and were trying to finish the climb before dark. Additionally, the climbers stated that “complacency and a lack of communication” between both climbers lead to the decision for the leader to clean on rappel instead of having the belayer second the pitch. They felt that if they had communicated the plan for ‘cleaning’ before starting the climb, both climbers may have been more aware of the difficulties/ dangers with ‘cleaning’ the route in this way and come up with a better solution. Communication is very important in climbing and poor communication is often cited as a contributing factor in many accidents.

Cleaning a route while on lower or rappel is difficult to do if the route traverses or is very steep, as gravity forces you straight down making it difficult to swing over to reach the quickdraws. Often, in these scenarios, it is better to top-rope the route to avoid this difficulty. Sometimes, it is possible to clean traversing or overhanging routes if the traverses/ overhangs are not too extreme. In these cases, good communication and a solid stance for the belayer is essential. Like always when belaying, the body weight difference between the leader and the belayer is important to keep in mind, as a heavy climber will be able to pull a lighter belayer much more easily than vice versa.
The following are some factors that contributed to the severity of this accident:

Cleaning a route in this way is something that is commonly done by many climbers. This accident reminds us of a few factors to consider when cleaning a route while on lower or rappel. Additionally, it is a reminder that serious injuries can occur in unexpected ways even while doing something that is considered routine by many. Always be on the lookout for potential dangers and don’t get complacent!
The injured climber had surgery on her ankle at the Banff hospital the next day and is recovering well.