A party of two decided to climb the 3/3.5 couloir (so named because it lies between peaks 3 and 3.5 in the Valley of the 10 peaks) at the far end of Moraine Lake on a warm day in July. It had already been a fairly warm and dry summer in the Rockies, so the couloir was part ice and part snow. They left the parking lot at 11:00 with the intent of climbing as high as the snow went and then turning around. While descending around 15:00, they decided to glissade down the snow. They both lost control in the soft, unconsolidated snow and fell several hundred meters down the couloir. . A member of the public witnessed the fall and reported it to the front desk at the Moraine Lake Lodge, who in turn called Banff Dispatch. 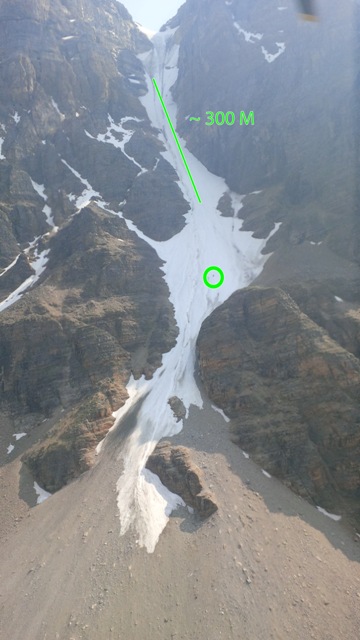 The line shows the approximate fall distance and the circle is where the injured climber had gotten to when Visitor Safety crews arrived on scene.

The report came in as two climbers caught in an avalanche and only one person visible at the bottom of the slope. A co-ordinated response from Visitor Safety (VS) staff in Banff and Lake Louise was mobilized. VS staff were able to make contact with an Association of Canadian Mountain Guides (ACMG) training course who happened to be on scene shortly after the accident occurred. The ACMG group had made contact with the fallen climbers and confirmed that there was no avalanche involvement, one climber was uninjured and the other was still mobile, but had unknown injuries.

Both subjects were able to self evacuate to the bottom of the technical terrain and were picked up by the rescue helicopter and transported to the ambulance at Moraine Lake. 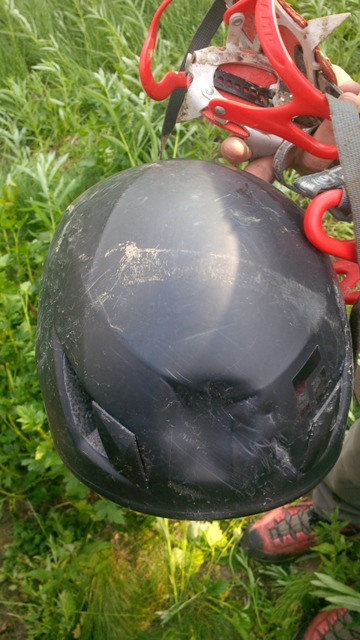 The helmet that one of the fallen climbers was wearing showing the force involved in the fall.

Analysis
The 3/3.5 couloir is a steep, 900 metre tall snow/ ice slope that is sometimes skied in the spring and was once popular in the summer as an access to the Mt. Fay area. It is always important to remember when travelling on snow slopes that although it is often easy to climb up them, there is little friction on snow, and once you slip you will gain speed quickly making it very difficult to self arrest.

Regardless of the slipping hazard, the 3/3.5 couloir can be a bad place to be in the summer. It is subject to a high degree of rockfall, especially in dry summers as the seasonal snow melts off exposing bare rock-embedded ice and has been the location of several accidents over the years. Because of this hazard, and the fact that there are two other well-used and safe access routes to the Mt. Fay area (the Perren and Shiesser routes), the 3/3.5 couloir is not often used in the summer and is not recommended.

As a general rule where snow and ice are present, rockfall and avalanche hazards are higher on warm days. Therefore, even though it is still unadvisable to climb the couloir on most summer days, if they had picked a cold day and started and finished their climb early before the day had warmed up too much, their risk of being hit by rockfall or avalanched would have been much lower. Conversely, it is important to keep in mind that the consequence of a slip with colder temperatures and harder snow conditions is much greater.

Luckily for them, the climbers were not hit by rocks and the soft snow still present in the gully decreased their total fall distance, preventing more serious injuries. Both climbers were very lucky to walk/ limp away with only minor bumps and bruises.

Finally, the climbers did not have any method of communication with them and were lucky that their accident was witnessed and reported by on-lookers. Parks Canada Visitor Safety always recommends that backcountry users carry at least one reliable form of communication per group. Reliable forms of communication include cell phones where there is cellular service, emergency satellite communicators such as the SPOT or Delorme, and satellite phones.

On July 24th, 2014 two hikers set out on a multi day backpacking traverse from Morraine Lake to Lake O’Hara with a scramble up the SW Ridge of Mt Temple planned for along the way. After climbing Mt Temple they misinterpreted some route information and tried to take a shortcut over Ringrose Peak to reach Lake O`Hara. As a result they ended up stuck on the side of a steep snow couloir at 2900m on the East Face of Ringrose Peak.

On July 26, 2014 at 1955 hours, Visitor Safety received a call for some hikers in distress near Mt Hungabee in Paradise Valley. Due to a poor connection and a dying cell phone battery only vague location information about being near a glacier, and personal details about being cold, wet and stranded were received before the cell phone battery died.

With limited daylight remaining a rescue response was initiated and two Visitor Safety members flew into Paradise Valley to begin the search by helicopter. After several passes some old tracks were located in the snow on the glacier and followed up toward a couloir on the East Face of Ringrose Peak. 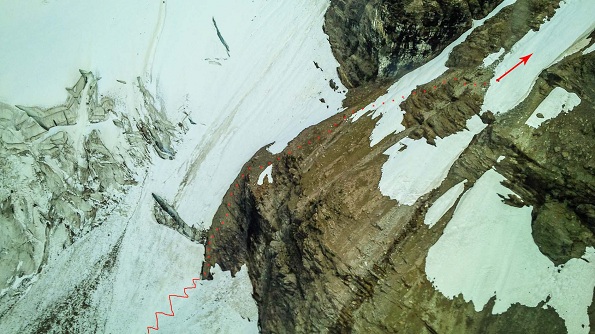 Tracks leading up to the couloir from the Horseshoe Glacier, 2014-07-26

Eventually the two hikers caught the attention of the searchers by waving a reflective emergency blanket in the air. They were located in a deep gully on the edge of a steep snow couloir with a cornice at the top of the gully and steep rock on either side. 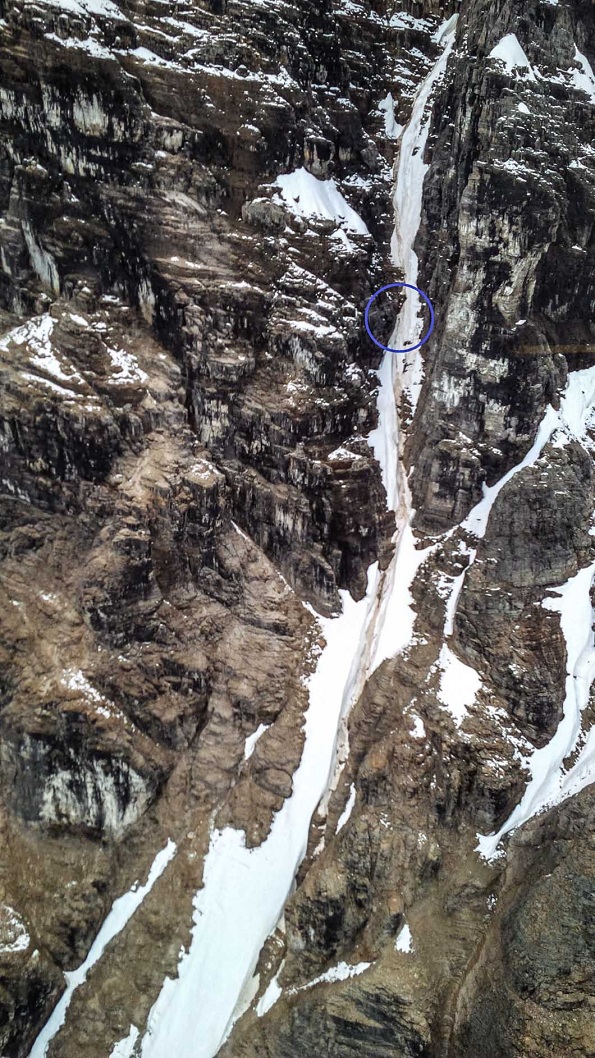 Location of stranded hikers in couloir on Ringrose Peak, 2014-07-26

After assessing the flying conditions in the gully, as well as the risk of sliding down the steep snow and the risk of rock or cornice fall in the gully, the decision was made to fly in and sling the hikers out from their location without getting off the line below the helicopter. Two trips were made into the gully and the hikers were slung down to the flat glacier below, loaded into the helicopter and flown to Lake Louise to meet with another member of the Visitor Safety team. Aside from being cold and wet they had no other injuries. 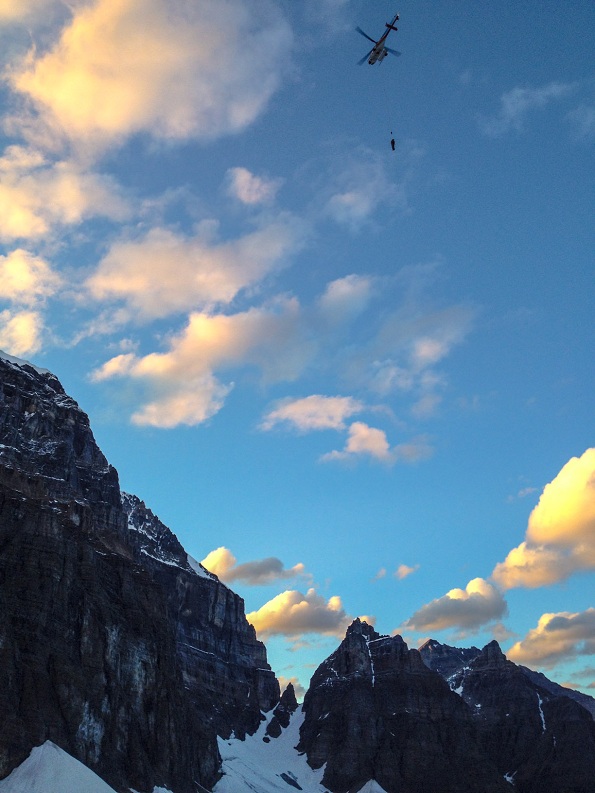 Visitor Safety slinging into the couloir on Ringrose Peak, 2014-07-26

Analysis
The main learning point in this instance is to get as much information as possible on your intended route before you head out. Look carefully at maps, examine it on Google Earth, get information from guidebooks or the web, and be properly prepared for the terrain you will encounter. This team was equipped for hiking, but was off route in steep mountaineering terrain. They were very fortunate to get rescued without further incident. Being ill equipped for steep snow travel they were still able to make it a long way up the couloir by kicking steps in the soft snow of the afternoon, but would have had no means of climbing up or down by the following morning after the snow froze overnight. This would have made their narrow perch even more precarious. Being properly equipped with ice axes, helmets, crampons and a rope would have allowed them to descend after realizing that the route they choose was not going to work.

The fact that they were able to get a cell signal for a few moments while deep in the gully in a remote location was very lucky and made a big difference in the outcome of the event. Having a fully charged battery would have made for a faster response and much better location information. When relying on a cell phone for emergency communication it is a good idea to always ensure that you have plenty of power left for a call when needed, 30-40% is the recommended minimum.

Finally they were very fortunate to have the cool calm weather conditions that allowed the pilot to fly into a tight gully and hover there while the hikers were connected to the line. With warmer temperatures or a little bit of wind this may not have been possible and both the hikers and the rescuers would have had to expose themselves to more hazard while accessing the gully and descending from the rescue location.

One of the things this group did right was to actively try and get the attention of the searchers by waving an emergency blanket. Having bright clothing or reflective items and making large movements makes it much easier to spot someone from the air. Once spotted, making a “Y” with your arms is a good idea to ensure that the rescue team knows that you need help. 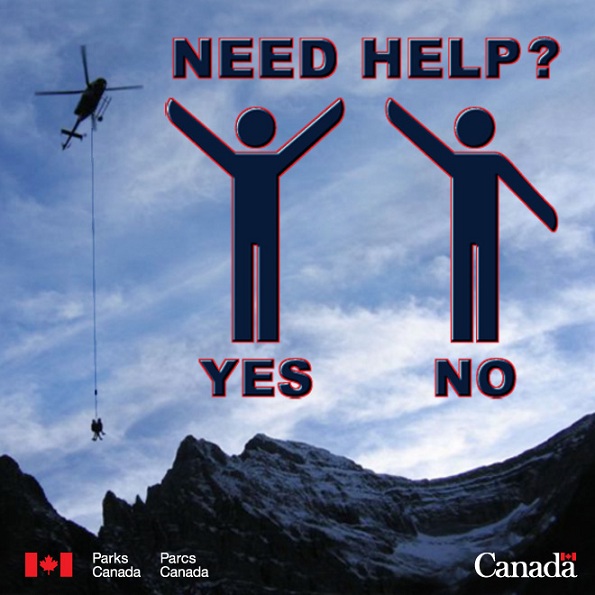