As they started up a steep slope on the south west corner of Lake Agnes, the leader triggered an avalanche. He called "avalanche" once the snow started to move. The first four people in the line were caught. Two of the snowshoers were buried completely and unaccounted for initially. Two other snowshoers were partially buried (up to their shoulders and waist respectively). Only one snowshoer was not caught and he excavated the two that were partially buried. The three surviving snowshoers then placed a call to 911 who alerted Parks Canada. As they were waiting for emergency services to arrive, the three snowshoers on the surface searched the area for visual clues and made efforts to probe with ski poles. None of the party had avalanche rescue equipment. With a stroke of luck one of them located one of their two buried friends with a ski pole. The group dug out her shoulders and face to find her unconscious and not breathing. She had been buried for approximately 1 hour. Parks Canada Visitor Safety (VS) arrived by helicopter shortly after she was uncovered. 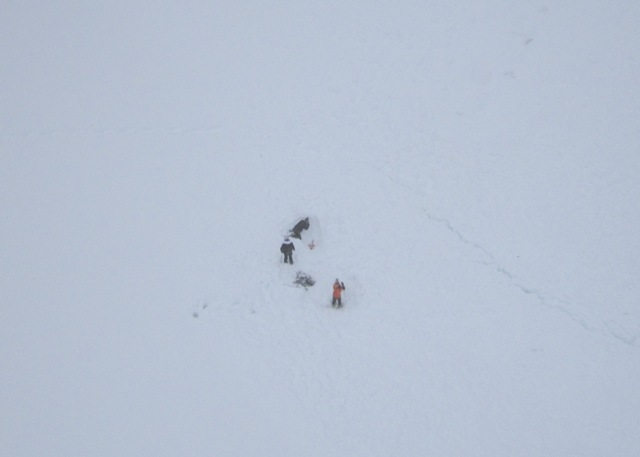 This is what the rescue team first saw from the air upon arriving at the scene.

The Rescue broke down into three phases:

Phase 1:
Parks Canada VS flew over the scene with a helicopter and two VS team members on board. Right away, they saw a size 2 avalanche that ran from the top of the slope to the shore of Lake Agnes (see photo). Two people were standing, searching with ski poles and one person was digging out a fourth person with his hands. The person in the hole appeared to be unresponsive. The VS team observed significant residual avalanche hazard that threatened the rescue location.

The VS team’s first priority was rescuer and survivor safety, and as such they decided to evacuate the three survivors left standing on the avalanche deposit and remove them from further danger. The helicopter landed on the lake in front of the avalanche deposit and the VS team persuaded two of the survivors that the area was not safe and that they should get in the helicopter. The third survivor refused to leave and was left digging out the fourth unresponsive friend with his hands. The helicopter left the scene and transferred two of the survivors to Banff EMS and Lake Louise RCMP. Upon returning, the VS team was able evacuate the third survivor and the fourth unresponsive patient and transferred them to Banff EMS and Lake Louise RCMP. The fifth snowshoer had been buried for approximately 1.5 hours at this time and the conditions were too dangerous for rescuers to enter the scene without first conducting avalanche control. 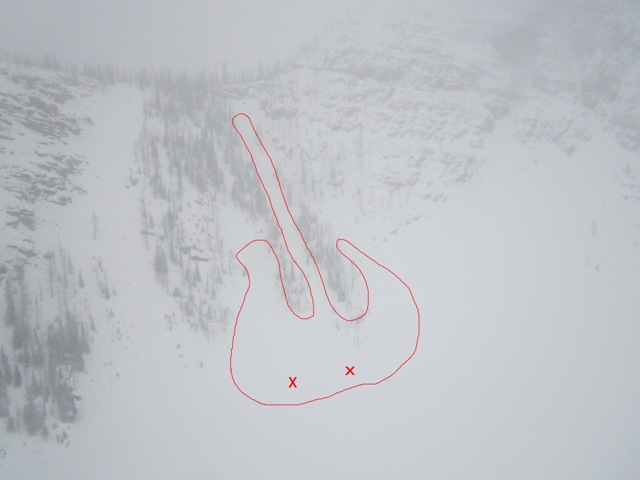 The scene of the avalanche. The avalanche is outlined in red and the X’s mark where the deceased were buried.

Phase 2:
Parks Canada requested the assistance from the Lake Louise Ski Patrol (LLSP) to conduct avalanche control. LLSP provided 12 explosives and a bombardier. They threw 12 explosive charges in the area surrounding the avalanche and triggered an additional 5 avalanches, 2 of which buried the rescue location directly. The area was now deemed safe for rescuers.

Phase 3:
Four Parks Canada Visitor Safety members, one Kananaskis Public Safety member and a Parks Canada dog handler were placed on the scene to search for the last buried victim. It took the search dog Cazz approximately 7 minutes to locate the victim. This was confirmed with a probe strike at 17:45. The last snowshoer was excavated and found face down in slush and unresponsive. He had been buried for 3 hours and was obviously deceased. He was evacuated to staging and the RCMP. The rescue team was removed from the scene in fading light and the helicopter was forced to stay in Lake Louise for the night.

Analysis
This is a tragic story of a group with no awareness of the hazard getting caught in the wrong place at the wrong time. In the winter, these summer hiking trails are not maintained or controlled for any hazards. Many of the trails in our national parks are in avalanche terrain and in the winter, they are backcountry, and subject to backcountry hazards such as avalanches.


On March 15, 2014 a group of four backcountry skiers were skiing near Helen Shoulder in Banff National Park. The avalanche hazard at treeline and above was rated Considerable, and below treeline was rated Moderate. At various points during the day the group dug into the snow to try and further assess the avalanche hazard. On their way down in the mid-afternoon they considered descending the edge of an avalanche path. From their evaluation of the current conditions and snow pit information, they decided that the area would be safe to travel in and began skiing one at a time. At 1430 hours the first skier began skiing but fell part way down the slope. At the same time a large “whumpf” was heard and a size 3 avalanche occurred. The skier was hit by the avalanche, carried approximately 100 meters down the slope and buried by the debris. Another skier in the group was near the edge of the avalanche but managed to stay off to the side. 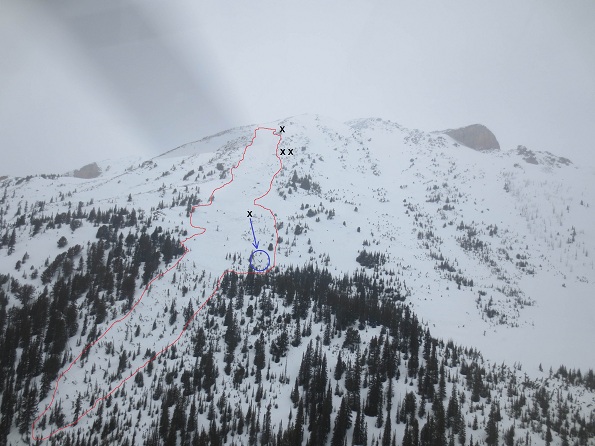 The group took immediate action and in less than 10 minutes had located the buried skier approximately 100cm beneath the snow surface using a beacon and probe. After exposing the patients head and chest, the patient was determined to be unconscious and not breathing. Two members of the group remained with the patient and performed CPR until our Parks Canada Visitor Safety team arrived on scene by helicopter. The third member of the group skied down to the road, notified two separate passing vehicles of the avalanche emergency, and instructed them to call 911 when they reached cell phone service. He then clearly marked the location on the road below the avalanche site for emergency vehicles and waited for help.

Rescue:
At 1539 hours Parks Canada Visitor Safety received the call for help while in the Lake Louise area and responded immediately by helicopter and ground transport to the Helen Shoulder area. After a quick flight over the avalanche site, it was determined that the rescue location was safe. At 1608 hours the helicopter landed on the avalanche deposit and one of the Visitor Safety staff got out to assess the patient, apply an automated external defibrillator (AED), assist with CPR and package the patient for transport. The other Visitor Safety staff secured a landing area on the highway and rigged for a helicopter sling rescue. The patient was slung from the accident site down to the road and transferred to EMS staff. They were then flown with EMS staff to Lake Louise to meet the STARS Air Ambulance and transported to Calgary. Unfortunately the patient passed away the following day in hospital.

Analysis:
From a rescue perspective this team was well practiced and did a good job. They had all the necessary avalanche gear with them and they knew how to use it. They only had one skier on the slope that avalanched. They responded quickly and were able to locate and uncover the patient in a short amount of time. They initiated CPR immediately and continued it until Parks Canada Visitor Safety arrived, and they sent out a call for help as quickly as they could. As a result of their efforts the patient was given the best chance of survival they could have had in those circumstances.

The key snow pack issue in this avalanche was the deep basal facets. This can be tricky to evaluate and once triggered can propagate large distances quickly. The slope that avalanched was in a thinner snow pack region of the Park and exposed to cross loading by the wind. As a result it had extremely variable snow depths and lots of thin spots with very weak basal facets. Recent snowfall had made some of these thin areas more difficult to see. The avalanche was likely triggered from a thin spot and propagated to the top of the slope resulting in a large destructive avalanche. In a scenario like this with large differences in snow depths, snow pit information can be variable and unreliable. Avalanche terrain recognition and avoidance is often the only sure method of reducing the avalanche risk.


On the morning of March 15th, 2014 two very experienced climbers set out to attempt a series of climbs in the Ghost River Valley. After starting up the first pitch of Malignant Mushroom (WI5) the lead climber fell while placing his first ice screw. He fell about 6m to the base of the climb and slid a short distance injuring his back. The belayer pushed the 911 button on both of the climber’s SPOT emergency devices to call for a rescue and provided first aid. He indentified the injuries, stabilized the patient, insulated him from the ice, covered the patient with an emergency tarp, and used a Jet Boil stove to fill hot water bottles to place around the patient to help avoid hypothermia.

At 0900 Banff Visitor Safety received notification that two SPOT devices had been activated along with the coordinates of the location. The SPOT emergency signals were cancelled at one point and then reactivated which caused a minor delay. After phoning the numbers accompanying the SPOT registration they were able to confirm that the owners of the SPOT devices were ice climbing in the Ghost River Valley. Visitor Safety and Kananaskis Country Public Safety responded with technical ice climbing rescue gear to the incident.

Looking down on the accident scene on Malignant Mushroom, Ghost River Valley
(Blue arrow and circle indicate the location of the injured climber)

At about 1100 the patient was located at the base of the ice climb. Four rescuers slung into the site by helicopter and packaged the injured climber. STARS Air Ambulance was called in to a staging area near the climb. At 1145 the patient was slung out to STARS before being transferred by the STARS helicopter to the Foothills Hospital in Calgary. His injuries included four fractured vertebrae and a large hematoma on his hip.

Analysis
Sometimes despite having all the skills needed for a climb, accidents can happen. This party was well prepared. They told friends where they were going, brought appropriate equipment, and had emergency communication devices with them. The belayer also did a good job of providing first aid.

One contributing factor in this event may have been the intense sun which the ice climb received over the previous several days making the ice surface less secure than normal. The climber was forced to climb higher to find quality ice for his first ice screw, and did not always have optimal ice tool placements.

A second contributing factor may have been that the ice tools he used that day were not his regular tools. As a result he did not have had the same feel for the ice placements as he did with his regular ice tools.

A third influence may have been the fact that the group had an ambitious day of climbing planned. As a result there was some pressure to move quickly on the climb. Sometimes even a slight sense of urgency can alter how securely you climb, even when you are trying to be careful.

The final learning point was that once an emergency signaling device is activated it is best to leave it on until help arrives to avoid any delays. Know your device well in order to avoid any confusion in how to use it.