A party of two was climbing the classic WI 4/5 multi-pitch ice route Louise Falls. They had climbed the crux pillar and were on the last easier pitch before topping out. The less experienced climber attempted to lead the last pitch but found it was too much, so lowered back to the belay off a single ice screw. The more experienced leader took over and lead past the ice screw and put another screw in and continued to the top. As he was topping out on the final bulge, his feet blew out and his tools which were not set well popped out of the ice. He fell and pulled out his first screw, landing on his second and final ice screw which held. He fell approximately 12-15 metres and caught his foot on the ice, breaking his lower right leg. It was ~ 16:00 and the injured climber was in a lot of pain and the team could not move themselves, so started yelling for help.

Banff Dispatch got the call from some bystanders on the lakeshore trail underneath the ice climb and notified Visitor Safety (VS). Two VS specialists responded by helicopter from Banff and two responded by snowmobile from Lake Louise. A local guide was on top of the climb and was able to relay some information and help to initially secure the scene. VS specialists attempted to sling into the patient site, but called it off due to overhead tree hazard. Plan B was to sling to the top of the climb with rescue equipment and get ready for a ground evacuation that would last into the night.

A single VS specialist was slung to the top of the climb and with the aid of the guide was lowered to the patient’s location. It was a very technical site with a hanging belay but the party was able to stand on a small ledge. The VS specialist cleaned up the site and prepared the anchors to take a stretcher.

The remaining three VS specialists arrived on the top with the rest of the rescue gear and belayed the uninjured partner to climb up and out. The decision was made to raise the patient to the top of the climb and lower him down the walk-off so as to not expose the rescue team to the large hanging daggers lookers right of the climb. A VS specialist lowered to the site with the stretcher and leg splints and packaged the patient to be raised to the top. The remaining VS specialist cleaned the site and climbed to the top. 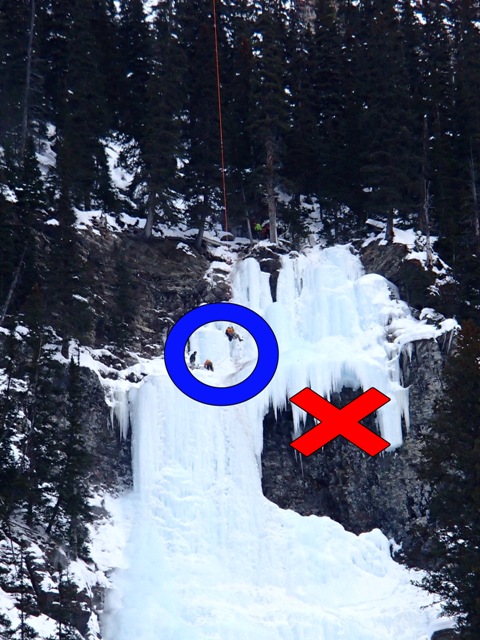 The site of the accident. The blue circle is where the injured climber was and the red ‘X’ shows the objective hazard of the hanging daggers.

VS specialists were in communication with a doctor at the Banff hospital who advised realignment of the injured limb and nitrous oxide for pain management, both of which were applied to the patient with positive results once he reached flat ground at the top of the climb. The patient was then pulled through the forest on a stretcher and lowered down to the shore of Lake Louise which was a long and arduous process for everyone involved. 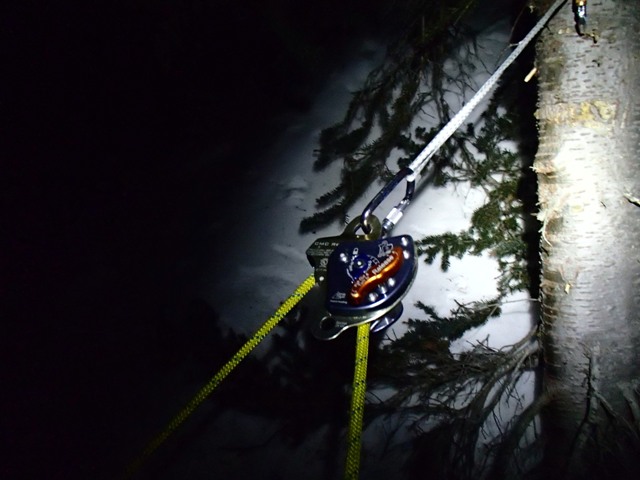 A rescuers headlamp highlights the anchor and device used to lower the stretcher down to the shore of Lake Louise.

Analysis
Lead falls while ice climbing often result in serious injuries. Leading ice requires intense focus and for the leader to be well within the margins of his or her climbing ability. That said, accidents do happen which is why it is essential to protect frequently and adequately to limit the consequences of a fall. Often, the trickiest part of an ice climb is at the top of a pitch where you are transitioning from steep to lower angled terrain. It is difficult to see your feet and often the ice is more brittle or thin at the top. It is essential to move slowly and in control and protect yourself well at the top-out to every ice pitch.

Additionally, it is important to have an emergency communication device in your group so that you can call for help if something goes wrong. This party was lucky enough to have bystanders around to call for help for them, but otherwise were not carrying any device to call for outside assistance.

When an accident happens, even a well travelled classic can seem like a very remote and hostile place where help can be difficult and time consuming to receive.